Caelan Doris has stressed the importance of a fast start for Ireland when the Six Nations championship kicks off this Saturday.

Just as they did last year, Ireland face Wales (live on RTÉ2) and France in their opening two matches as they look to build on their impressive Autumn Nations Series last November.

While Ireland are on an eight-game winning streak, they were left to rue a slow start in the 2021 Six Nations when they were beaten by Wales in the opener in Cardiff, with Wayne Pivac's side riding that wave of momentum all the way to the title.

Despite Ireland's good form, France are viewed as the favourites to win a first title since 2010 having also beaten New Zealand in November, while England's defeat of the world champions South Africa has brought them back into the picture following a poor Six Nations last year.

And Doris says the form of northern hemisphere sides shows how fine the margins are between this year's contenders, hammering home the need to make a positive start.

"Momentum in the Six Nations is huge," he said.

"It's obviously a tough start for us (against Wales) but with five or six teams being very competitive, each game is going to be tough, so getting the momentum going early is definitely important.

"It's incredibly competitive. The Six Nations always is, but you could arguably say this year even more so.

"Some great results for northern hemisphere teams over November and I'm sure a lot of teams will be fancying themselves, backing how they are playing.

"So it's exciting for us. We're definitely confident in the players and the management we have here, how we want to play and the understanding that is coming with that.

"So we're looking forward to it all."

Still only 23, the versatile back row forward's form has reached world class levels in recent months; his Player of the Match display in the November win against New Zealand led to him being named Autumn Nations Player of the Series, while this afternoon he was among five Irish men shortlisted for the European Player of the Year award. 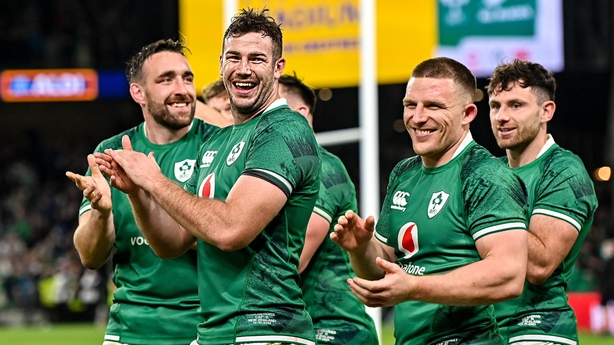 It's a marked contrast to where he was 12 months ago, when he was stood down for the Six Nations championship due to fears over concussion, something he has spoken openly about earlier this season.

"I'm loving playing at the minute," the Leinster man added.

"Both in Leinster and in here, two top-class environments, great coaches and players and it's really enjoyable.

"From having missed the Six Nations last year, I'm pretty excited to be hopefully a part of it this year and hopefully getting stuck in this weekend."

Echoing the thoughts of his captain Johnny Sexton, the Mayo native says Ireland won't be allowing themselves become distracted by their good showing last November, as they look to add layers to their game ahead of next year's World Cup in France.

"So far this week has been very much on ourselves, on getting our own stuff in order obviously having been back with our clubs for the last couple of months.

"They (Wales) had a pretty successful November as well and have been dangerous over the last few years, so we're looking forward to it.

"We know that there is still a lot more in us. Looking back at some of the games, we played well, but there are so many opportunities to get better and so many areas for growth.

"You always talk about the perfect game, and it's hard to even imagine what that looks like. But some of the tries we scored throughout November were pretty good ones, and we think we can up it another gear and bring more of that."

Follow all of Ireland's Six Nations games via our live blogs on rte.ie/sport and on the RTÉ News App or listen to live radio coverage on RTÉ Radio 1. Watch live TV coverage of Ireland v Wales (5 February, 2.15pm) and France v Italy (6 March, 3pm) on RTÉ2 and the RTÉ Player.