The Six Nations is back this weekend. With the normality of full crowds restored, and with Irish expectations climbing back towards their peak, it promises to be a highly enjoyable competition.

When I think back to the most memorable Six Nations moments in the last decade or so, all of them obviously come from the successful tournaments with Ireland competing for the top prize. That's why this weekend is so crucial for this Irish side under Andy Farrell.

We’ve witnessed an opening round loss in 2019 and 2021, it really takes the wind out of the sails. It changes the dynamic of what can be a very special tournament for the Irish squad and supporters.

2019 was probably the worst opening round deflation of them all. Ireland had come off the back of beating the All Blacks for the first time at home, and Eddie Jones stifled Ireland with sheer physicality and a clever kick strategy which really took us to both extremes of the emotional scale. Ireland were on top of the world in the Autumn Series, and already back to being second best after the opening round in February the following calendar year.

Ireland have turned that corner from hope to expectation under Andy Farrell, and to create the moments that the Irish jersey has experienced in the last 10 or 12 years, beating Wales is crucial.

To go to England in round four with everything to play for, that's what this tournament is about. Reliving the moments of Johnny Sexton’s drop-goal versus France, his brace of tries against France in 2014, Robbie Henshaw’s third round try against England in Dublin in 2015, all of these moments are dependent on getting out of the first round with a win.

Tommy Bowe collecting a bouncing kick pass from ROG in 2009 and ROG’s drop-goal are more standout moments, en route to a Grand Slam. Last minute ecstasy against France to send Brian O’ Driscoll into retirement, in the type of successful send-off that other sportspeople can only dream of. Shane Horgan’s try, or anything at all to do with beating England on Paddy’s weekend to deny them the championship. These are all memories that have been engrained in our minds from the Six Nations competition.

You don’t want to be the team beaten on the opening weekend and the pressure of the media and your nation on your back for the rest of the tournament. Ireland carried out that role in the dreaded loss to Eddie Jones and his team in 2019 and again to Wales last year. England had a similar experience last year after losing to Scotland in a shock upset in horrendous conditions in Twickenham and went on to finish fifth, having been champions the year before.

Johnny Sexton has been involved in a huge number of successful moments for Ireland. I know there are calls to bring in the next out-half to carry us towards the World Cup, but I’m delighted to watch someone of his ability for as long as possible in an Irish jersey. He displayed how good he can be in the Champions Cup again recently. We definitely need to preserve him and not get rid of his talent and leadership before the next World Cup. His game time might be more managed, but his presence is vital within the Irish squad.

Tadhg Furlong is another crucial member of this team so let’s hope he can be fit for the opening round and continue that for at least four of the other five rounds too. Robbie Henshaw has created memorable moments in some of Ireland’s biggest wins in the last decade and Garry Ringrose’s role in the team is becoming more obvious all the time.

However, for Ireland’s ambitions to continue forward, you’ll need a couple of breakthroughs in this year’s competition. Robert Balacoune could be one of those if he is backed by Andy Farrell. He is definitely on the cusp of winning Farrell over and with one or two standout performances you could see him own the jersey for quite a while.

Both Mike Lowry and James Hume are creating a lot of buzz and excitement when they get on the pitch, but I think a successful tournament for them will be to get some involvement and creep their way closer into contention down the line.

Ryan Baird is a guy that has gone under the radar in the last while, due to the lack of game time in Leinster across Christmas, but his last campaign with Ireland definitely earned some attention. He’s the type of player that could come out of this tournament in a starting jersey, if things go his way.

Ireland will need the next generation of players to step up and create the moments of the last decade. Caelan Doris, Van Der Flier and either of the Leinster hookers all have the ability to step into that role and do for Ireland what the likes of Henshaw did back in 2015. Big moments will have a massive bearing on the tournament, which will lead Ireland nicely through the second half of their World Cup cycle.

Wales as an underdog is a dangerous prospect. Despite winning the tournament last year, all the talk is about France and the rebuild going on in England, maybe even Ireland’s chances of a much-needed tournament win.

It’s building nicely for a spicy affair at the Aviva stadium on Saturday afternoon and all eyes will be on Farrell’s first team selection of 2022. 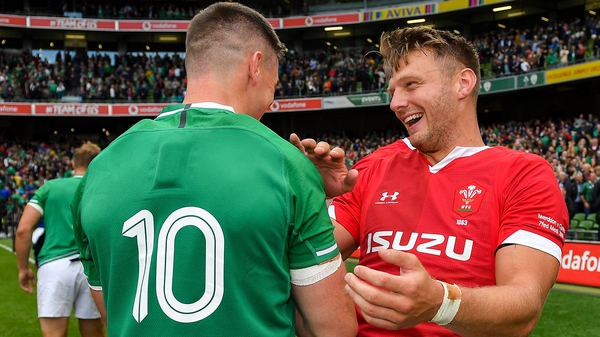 Sexton 'near top' of Biggar's most difficult opponents