Post-mortems are never pretty. This one is going to be gruesome.

The Irish Rugby Football Union will carry out a review of Ireland's failure to qualify for the Rugby World Cup following a third-place finish in a four-team round-robin tournament in Parma over the last fortnight.

"The IRFU, no more than the players and team management, as was evident from the reaction at the end of the game against Scotland, are extremely disappointed that our women’s team objective of qualifying for the Rugby World Cup has not been achieved," it said in a statement released to RTÉ Sport.

"An enormous level of work and commitment from the players, team management and the IRFU high performance team has been given to this campaign over the past 18 months and we would like to thank them all.

"In line with the men’s 2019 Rugby World Cup and all other National Team campaigns a review of the Women’s XV’s RWC qualifying campaign will be conducted.

"A mix of external consultants and internal stakeholders will be tasked with providing a detailed report to the IRFU high performance unit." 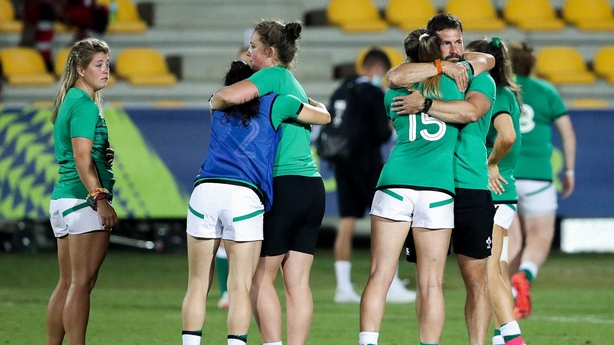 The immediate aftermath of this event, and the shocking loss to Spain and last-gasp defeat to Scotland, is the only time we should hear about the "work and commitment" that these players have put in.

To labour this point would be to imply that the women of rivals Scotland, Italy and Spain don’t have the same dedication and honesty and make the same sacrifices when, of course, they do.

The manner of the defeat is naturally devastating for the players and backroom staff but we shouldn’t project that if it was the Scots or Italians that missed out they wouldn’t feel the same when they woke up on Sunday morning.

The review of the Parma tournament should focus on the squad and coaching staff, while the larger-scale analysis must be forensic in dealing with the structures and systems that are in place.

"I think there's an appetite within the Irish public to see Irish women's rugby improve at the top table"@CoghlanFiona is confident Ireland can bounce back from Saturday's World Cup qualifying heartbreak @mariecrowe reports #RTERugby pic.twitter.com/LkvQkJ5QqW

"The players and management involved in this tournament have to take responsibility," Grand Slam-winning captain Fiona Coghlan told RTÉ.

"If you look at a non-functioning set-piece you can’t function like that.

"Some of the decision-making, not taking that 67th-minute penalty to go two scores in front.

"They are hugely important things that could have changed the game."

We heard from captain Ciara Griffin about players stepping up and relishing the pressure that comes with knock-out games but when the pressure was applied on the field composure was lacking.

The usual cliches were trotted out in advance about winning the game first and worrying about permutations afterwards but again, when the chance was there to almost guarantee a repechage spot, it was declined.

That’s not unique to the women’s game by any means.

When Ireland's men played France at the end of the 2020 Six Nations, they required a win by seven points, and over the course of the first half there were a few decisions made that sent out mixed messages.

Ireland’s discipline over the tournament was decidedly poor, also. Over the three games they had four players sin-binned with Spain and Scotland both scoring their winning tries against 14 women.

Italy’s try against Ireland also came when Ireland were reduced to 14.

Scotland's boss Bryan Easson admitted he had spotted it as a weakness of Ireland’s game. 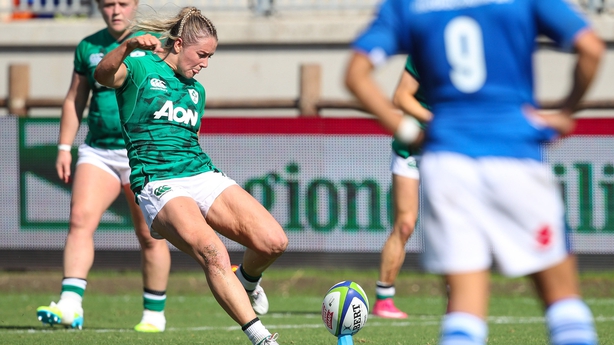 While Ireland did lose the experience of out-half Hannah Tyrrell, who switched back to play football with Dublin, starring as they made it to the All-Ireland final, replacement Stacey Flood (above) was one of the better performers.

Questions can also be asked about parachuting Lucy Mulhall into the team to face Spain.

The Ireland 7s captain is an accomplished Gaelic footballer and experienced player in the shortened version but to drop her into international rugby for a World Cup qualifying game having played so seldom over the last couple of years was a big risk.

She didn’t feature against Italy or Scotland.

Leaving aside the suspension of provincial rugby during Covid, her involvement with the national 7s team since 2015 also meant that experience playing XVs with her club, Rathdrum RFC, was also limited.

In terms of pathways the IRFU and high-performance director David Nucifora, whose current contract ends next summer, likes to treat the two codes as equal, but that’s not the same as landing a player who has limited 15s experience into the front line.

IRFU chief executive Philip Browne said in 2018: "We don't distinguish between them.

Through no fault of her own the Wicklow woman was asked to play a match in a different sport at the top level of the game.

When Ireland suffer defeat to professional and semi-professional outfits in England and France, the difference in resources and support are rightly brought into the equation.

The same does not apply here.

Yes, there was a kick of ball in both losses, 8-7 to Spain, 20-18 to Scotland, but the bigger question is how did a team that finished fourth in the 2014 World Cup, hosted the last World Cup and won two Six Nations titles in the last eight years find themselves in a position where it came down to such narrow margins.

The IRFU’s targets for the women’s game are there in black and white from the 2018-2023 strategic review.

However, five of the seven remaining headline targets all related to the 7s game.

The senior men’s targets, meanwhile, included two goals for the provinces (two Champions Cup and two Pro14 wins. No mention was made of the provinces in the women’s headline targets).

After Ireland finished eighth at the home World Cup in 2017, a placing that led to the team ending up needing to qualify, things were meant to change.

In the middle of the last Six Nations head coach Adam Griggs stumbled over a question about who was in charge of the women's game in the country.

The review announced today means the the IRFU are now conducting two inquiries, with the conclusions of the Energia Park fiasco still to be published.

"It's a low point for Irish rugby," said Coghlan, on co-commentary duty, as Scotland kicked Ireland out of the World Cup race on Saturday.

"The 2017 World Cup was a low point in Irish rugby, we've reached an even lower one now by not going forward to the next World Cup.

"It's devastating. Obviously devastating for Irish rugby. What do you say?

"A competition that you were going in as favourites, you slip up in the first game, you recover in the second, you go into this game as favourites and you have to credit Scotland, they fought us to the bitter end and it's a killer blow."

I know how hard players worked to get qualified. Deeply disappointed for them and for women's rugby in Ireland.
This result is a failing of the union. Their lack of ambition (WC review) + poor support has led to this.
Top of food chain, I question do they care at all #wrugby

"This result is a failing of the union," she wrote.

"Their lack of ambition (World Cup review) + poor support has led to this. Top of food chain, I question do they care at all."

Browne is due to step down in the new year.

The next person in has a job on their hands to ensure that the union makes it crystal clear that they do care.