Ireland head coach Adam Griggs has clarified comments he made on the topic of the structure of the women's game in the country.

Speaking at a press conference earlier in the week when he was asked who specifically was running the women’s All-Ireland League and the inter-provincial series, he said: "I know that we are running it as a body but you are looking for names and I am unable to give you names of who is running it."

Starting off his media duties today, he said: "I fielded a question on the domestic game and who was in charge.

"On reflection, I probably wasn’t as clear as I could have been so I feel it is important to acknowledge the work that Collie McEntee and Amanda Greensmith and the domestic game do in running our path-way and also our interprovincial series so hopefully that can clear up some of the comments that were made.

"I probably got put on the spot a little bit and I didn’t want to come across that we were putting it under any one person.

"As I stated, it’s the whole organisation running this thing, different departments taking charge of different parts of the organisations. At the time, on the spot, I wasn’t as clear as I could have been.

"The questions are understandable. What we have is a good model and a good structure.

"There is more work to grow the game, get the numbers up which will improve the competitiveness at the top level of the game. It was important to make that clarification."

Meanwhile, Griggs has instructed his players to "pull the trigger" when the opportunities arise against Italy on Saturday.

The sides meet in the Women's Six Nations third-place playoff in Dublin and come into the game off the back of contrasting results.

Italy beat Scotland 41-20 away, while Ireland were hammered 56-15 by France in the Energia Stadium.

It was an Irish performance riddled with mistakes, including 14 handling errors and 27 missed tackles, while they also conceded 20 penalties.

Griggs, after announcing three changes to his starting XV, reckons that most of the errors can be rectified.

"The mistakes that we identified are definitely fixable," he told RTÉ Sport.

"The mistakes we made were punished by a very good French team and we obviously take learnings from that and can’t afford to be off our game, certainly when you play the fourth best team in the world. It will be the same this week.

"Italy had a good performance last week. They did well against England albeit not on the scoreboard (67-3), but they will come to play.

"One of our messages this week is that we’ve got to be able to pull the trigger and what I mean by that is that if we see an opportunity, we can’t wait.

"We identified a couple of chances we had against France that we were too late or we got the ball turned over.

"We just can’t be that inconsistent, so we’ve got to make sure we sight the opportunity and pull the trigger early." 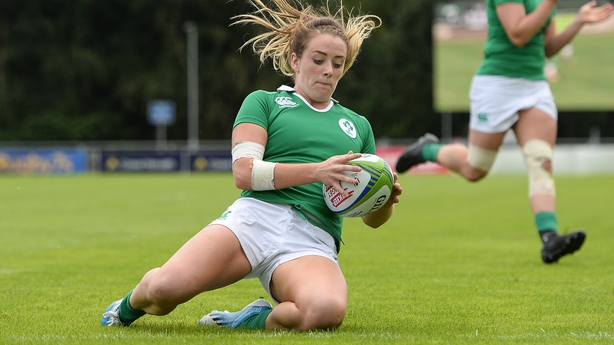 Veteran flanker Claire Molloy has been dropped out of the match-day squad, while Griggs has handed first starts to out-half Stacey Flood, wing Amee-Leigh Murphy Crowe, and back row Brittany Hogan.

"We had a conversation with Claire earlier on in the week around some of the performances and she's got things that she can still work on at the moment," said Griggs of the 72-cap Wasps player.

"The last six months we have talked about the depth of this side and building competition.

"I wouldn’t be keeping my word if we weren't giving some of these players a shot.

"When you look at Stacey in the last two games, she's come on and made a real difference.

"In that 10 position it’s fairly important that throughout the week you take control and ownership with how the team is steered.

"Hannah [Tyrrell’s] had that opportunity the last couple of weeks and this week we thought it was a good time to see how it goes with Stacey leading the team.

"Brittany, her two performances, has been really good coming off the bench as well.

"We see her as a bit of a hybrid that can cover the second row but also her future is probably also as a back rower."

'The countries that are taking women's rugby seriously are excellent' - @cantwelll on Ireland's catch-up mission - more on the #RTERugby podcast here https://t.co/OVlsaFtNck pic.twitter.com/0yjva9ZVkI

Ireland are due to play Spain in a World Cup qualifier with the winner to face either Italy or Scotland for a place at the rescheduled tournament, which takes place next year.

Asked what it a win against Italy would mean, the New Zealander said: "It would be a huge confidence boost for us. We are licking our wounds a little bit from last week.

"We’ve turned the page now and we’re moving into this week and we know that they will be a [potential] opponent for us in those qualifiers so it’s about laying down a marker and it’s more our internal standards, what we’ve got as targets this week that we need to make sure we hit.

"If we can come off the pitch and look each other in the eye and know that we did that, I’m sure the scoreboard will reflect that."