Lynne Cantwell believes Ireland will need to rely on crossover athletes in the short to mid term as talent coming from the grass roots will take time to reach the top levels of the game.

While the semi-professional versus amateur argument came to the fore following Ireland's dismal 41-point Six Nations loss to France at the weekend, there are a number of factors at play, not least the fact that very few of Ireland’s starting XV had played underage rugby with most switching over from other sports at a later age.

France, meanwhile, had a squad filled with years of experience and a wide gap between the abilities of the two sides became evident early on in the game.

In an ideal world, the players at Adam Griggs' disposal would all have years of experience, but that not the case at the moment, argues the former centre, who believes that nuance is needed to address the various issues.

"The talent transfer, I think we have to embrace it," Cantwell, Ireland’s most capped international female player, told the RTÉ Rugby podcast.

"There are going to be lots of basketballers and footballers and hockey players that will play rugby for the next while because women’s sport is coming from a lower base.

"Therefore those athletes that are capable of operating in that intensity are going to come from other sports at the moment – and that’s okay."

Cantwell, who is soon to move to South Africa to take up the role of women's high-performance manager, stressed that there are numerous issues to be addressed as Ireland moves to close the gap on the likes of France and England, including better structures for the current crop of Ireland internationals. 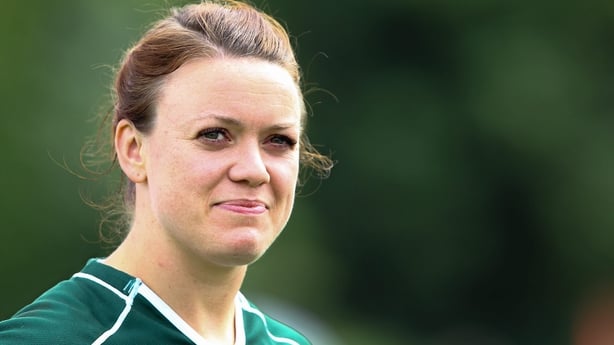 "We have to recognise that women’s sport doesn’t know how to be professional, a lot of them don’t and we have to try to guide them in that transition," she added.

"The semi-pro model can be a positive one because there’s huge value in people having a profession and growth off the pitch is important.

"But you have to try and focus on the talent that you have there in order to map them for performance immediately and the effect that that’s going to have from a visibility point of view on the girls that are going to watch that sport.

"There’s an element of patience from our point of view that we need to allow the girls time to grow and develop into high-performance athletes.

"Are they given the capability to be able to do that? Are the structures, resources in place?

"It’s great that they’ve been training for 20 weeks through the Covid but take that away and do they have weekly skill sessions by coaches in their own provinces to develop their own skills?

"Do they have those strength and conditioning facilities, are there regional hubs? Why aren't the girls training in the academies within Leinster and Munster etc?

"Do we have a high-performance system in Ireland that truly enables the girls to perform?"