Ireland fell to a comprehensive defeat to France in their second Women's Six Nations game at Donnybrook.

The eight-try mauling means Adam Griggs’ side finish second in Pool B and will face Italy, who beat Scotland 41-20, next weekend in a play-off for third place in the re-formatted championship.

France move on to face England in the play-off final.

Ireland, playing just their second game in six months, were simply out-classed and could not handle the power and tempo of a semi-professional French side.

There was little opportunity for the hosts to build on last weekend’s impressive 45-0 win over Wales and they were out of contention when France hit with a three-try salvo in an eight-minute period at the end of the opening quarter.

Cliodhna Moloney’s first-half try and a second touchdown from debutant Emma Hooban were the only positives on a harrowing afternoon.

Ireland had been due to play France last October in the rescheduled Six Nations fixture but that game was cancelled following coronavirus concerns in the French camp.

Indeed, this fixture only got the green light on Thursday when an exemption was granted for elite athletes by the Irish Government, which bypassed mandatory hotel quarantine. 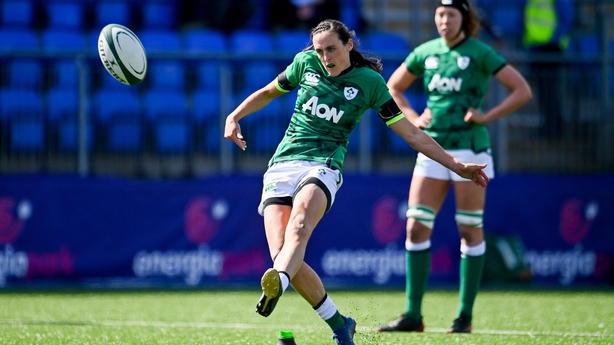 Ireland initially had the better of a scrappy opening and Kathryn Dane's tackle on Emeline Gros set up a chance for Hannah Tyrrell to convert a penalty from in front of the posts.

Centre Jade Ulutule escaped a yellow-card sanction for a blatant slap-down in midfield just a minute before France got their opening try.

It came in the 14th minute via a first-phase move off a scrum and it was a fairly straightforward effort with France attackers outnumbering the Irish defence and full-back Emilie Boulard setting winger Caroline Boujhard free.

That was the start of a purple patch from Les Bleues, who added four more tries before the break.

Boulard first chased down a kick from scrum-half Laure Sansus after Eimear Considine lost the ball in midfield.

Referee Sara Cox awarded a penalty try two minutes later and also sent Aoife McDermott to the sin bin for her part in pulling down a French maul.

Ireland get their first try while a player down as Cliodhna Moloney crashes over from close range #WomensSixNations #IREvFRA pic.twitter.com/oA1LtRiObD

However, Ireland managed to work some territory and a clever lineout move paved the way for hooker Moloney to touch down for Ireland’s first try in the 27th minute.

Lock Safi N'Diaye barged over for another try seven minutes later and there was even time for another before the break when winger Cyrielle Banet took advantage of a turnover in midfield.

There was no let-up in the second half with France manager Annick Hayraud able to introduce a number of experienced players soon after Boujard burst over for her second try in the 46th minute. 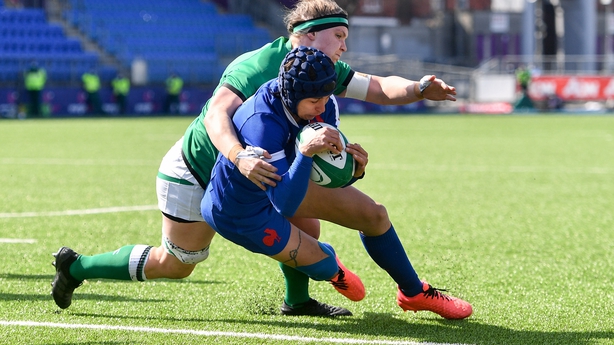 Replacement back row Romane Menager got on the end of a fine off-loading move to run in a seventh try in the 56th minute with Ireland struggling to keep pace.

There were debuts for hooker Hooban and Amee-Leigh Murphy Crowe, who was subsequently yellow-carded after a needlessly lengthy TMO consultation, in the second half but the momentum remained firmly with the French, who added another touchdown through Banet.

Hooban's try, converted by impressive replacement out-half Stacey Flood, from a lineout maul in the 74th minute served only to add some gloss to the scoreline. 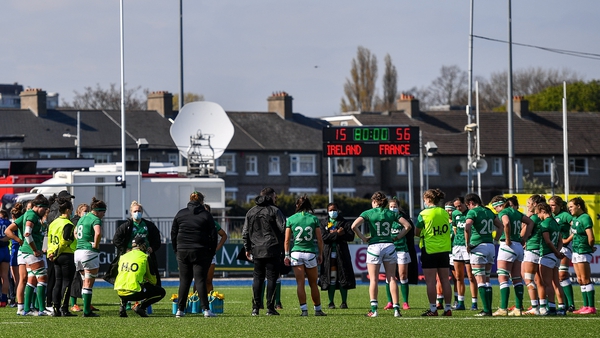