Follow Ireland v Scotland on Saturday afternoon via our live blog on RTÉ.ie/sport and the RTÉ News app.

Saturday will be a drier day for most places, with just isolated showers and some good sunny spells. It will stay rather cloudy for a time in the east of the province, with showery rain continuing there until the afternoon.

Highest temperatures of 5 to 7 degrees, with moderate to fresh and gusty north to northeast winds gradually decreasing light to moderate by evening.

While Ireland's autumn campaign has arguably brought more questions than answers, one thing is clear.

The final stage fixture against the Scots will be the "litmus test" for Andy Farrell's side - as Bernard Jackman said on the RTÉ Rugby Podcast in the wake of the defeat to England - in a way that the three pool fixtures against Wales, England and Georgia were not.

Wales are not quite the force of old at the start of the Wayne Pivac era, England remain a distance ahead in their development and Georgia are simply not among the upper tier.

However, Scotland are at a similar level to Ireland and not just in the sense of also finishing in the same second position in their own pool.

Their campaign mirrored Ireland's somewhat, beating Italy with a bonus point in the process, before falling short against the toughest opponent in the pool which in their case was France. 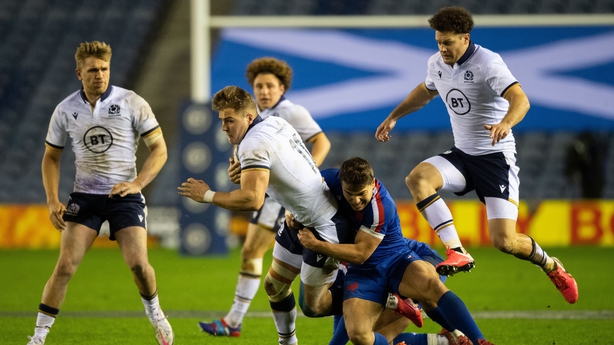 Ultimately, their fixture against pool minnows Fiji did not go ahead which also gives them an extra week to prepare for the clash at the Aviva Stadium.

Gregor Townsend's side could count themselves a little unfortunate not to have got something from the last meeting at the same venue 11 months ago.

But for Scotland captain Stuart Hogg inexplicably dropping the ball when over the line, the Scots would have probably salvaged at least a draw against an Irish side which was still adjusting to new methods in their first match of the post Joe Schmidt era.

Other than the prospect of revenge, they will feel like an away victory is eminently possible, especially given the continued question marks over Ireland's performances across 2020.

Andy Farrell has made six changes to the Ireland team which started against Georgia with a number of big hitters returning.

Johnny Sexton, who had been absent since suffering a hamstring strain against Wales last month, returns while  Bundee Aki, Robbie Henshaw, Cian Healy, Peter O'Mahony and Caelan Doris all come back into the starting team.

Ulster prop Eric O'Sullivan has been named among the replacements which puts him in line to become the latest Irish debutant during this international window.

Andy Farrell (Ireland head coach): "We're always striving to improve every aspect of our game. You guys will obviously judge the performance on the weekend and you won't necessarily see the steps that we're taking on a daily basis behind the scenes.

"What have we seen so far? Our game understanding has grown, our attacking-kicking game is improving but the accuracy is not quite there yet.

"And then obviously the fundamentals of the game always have to be strong."

Gregor Townsend (Scotland head coach): "We've been together for the past two months and from a coaching perspective it has been a real joy seeing the group come together and work so hard to improve both individually and collectively," said Townsend on Thursday.

"We are looking forward to facing Ireland in what will be an opportunity to continue our progress away from home once again."

Follow Ireland v Scotland this Saturday via our live blog on RTÉ.ie/sport and the RTÉ News app, watch live on RTÉ 2 from 1.30pm, or listen to live commentary on RTÉ Radio 1's Saturday Sport.