Online
Live blog on RTÉ.ie and on the RTÉ News app from 3.30pm.

Television
The Saturday Game Live begins at 3.40pm on RTÉ2, with Ger Canning and Kevin McStay providing commentary. Coverage on Sky Sports Mix begins at 4pm. Highlights of the final, along with the 'Team of the Year' announcement, on The Saturday Game, beginning at 9.55pm.

Viewers outside Ireland can access the game on GAAGO.

Weather
Saturday will be cool and breezy with sunshine and widespread showers, many of them heavy or prolonged and some of hail. Highest temperatures of 8 to 10 degrees with fresh or strong, gusty southwest winds. For more go to met.ie.

And just like that, we're almost at the end of a unique and dramatic All-Ireland SFC championship. Here's the story of the winter games... #RTEgaa pic.twitter.com/lSljxbKjwv

This year's final was due to have taken place on 30 August. In recent years the GAA decided on the 35th Sunday of the year as the date for the football decider. When the pandemic came to our shores and sport was subsequently suspended, many feared we would not see a championship. However, when the effects of the virus eased in midsummer, Croke Park plotted the year ahead and opted for a football championship that would be straight knockout, with the final scheduled for the Saturday before Christmas.

A thread about the last All-Ireland football final played in December — on this day, 9 December, 1917 when Wexford played Clare in Croke Park at high noon. Post-1916 it was a highly politicised final, from the Clare point of view.

The last time we had a December finale was in 1917, when Wexford defeated Clare to complete the third leg of a four-timer. A crowd of 6,000 turned up at the Jones' Road venue to watch a game played in ideal conditions. The Irish Independent reported that " the weather was ideal for outdoor games, the sun shining brilliantly."

This year, with a 5pm start, the sun will have settled well out west. Let's hope the expected heavy showers won't impact too much on what will be the fourth time in eight seasons that Dublin and Mayo have met on football's biggest day.

The Dubs, as expected waltzed through Leinster, even though many predicted Meath would give them something of a game on the night Bloody Sunday was commemorated. Not to be.

Donegal were expected to offer some resistance in the All-Ireland semi-final, but Cavan's defiance and doggedness in the Ulster final, put pay to that expected pairing. The Breffni were game at Croker a fortnight ago as the Dubs cantered to victory. Cue talk that Dublin should be split in two, maybe split in four and how they've arrived at a point where few can see an end to their dominance.

Let's take things one game at a time.

After Cork caught Kerry cold in the Munster semi-final, Mayo fans would then have seen a clearer path to the final if Galway could be overcome in the Connacht decider. Salthill on a breezy day is never the easiest environs to play football, but James Horan's side fought doggedly in the second half to repel a Maroon surge. In the end, there was the bare minimum in it, but in truth Mayo's effort was worthy of a three or four-point margin.

Against Tipp, the Green and Red at times were majestic, with Cillian O'Connor's haul of 4-09 the standout on day Croke Park was shrouded in fog. Yet, defensively the westerners where creaky at the back. More clinical opposition would have reaped a greater dividend.

And so here we are again. East v West. In one corner, a six-timer beckons; in the other a chance to end countless decades of hurt.

The 2020 final will be sorted on the day. If level after 70+minutes, we'll have two periods of extra-time - 10 minutes each way. If that doesn't sort things out, a penalty kick competition will follow. Sam Maguire will be presented by John Horan beneath the Hogan Stand, but the famous trophy will be staying in the building afterwards. Hopefully, when Covid is more manageable in 2021, Sam will either get to venture in the capital again or go to a place he hasn't been for a very long time.

Will strange year end with a surprise?

In summing up what has been said and written across all media platforms in advance of this final, Dublin are a warm order to complete the six-timer. Even though, they haven't been tested, they now look an even meaner machine than last year when the weight of the never-done-before five-timer was perhaps weighing on their minds.

Dessie Farrell was the obvious choice to take over from Jim Gavin. He has freshened things up somewhat, with Robbie McDaid, Seán Bugler, Niall Scully and Paddy Small all contributing nicely to the cause. Having the option of calling on Brian Howard, Paul Mannion, Cormac Costello and Kevin McManamon from the bench underlines the depth that Dublin possess.

Stephen Cluxton, who recently turned 39, rarely fluffs his lines on restarts. Brian Fenton is a midfield colossus, while Dean Rock will make any indiscretions pay with his accuracy from placed balls. All over the pitch, Dublin have more options.

Dessie's Dubs are dreaming of another All-Ireland SFC title. Watch the All-Ireland final live on @RTE2 & @RTEPlayer from 3.40pm on Saturday, listen to live commentary on RTERadio1 @SaturdaySport or follow our live blog on @RTESport Online #RTEgaa pic.twitter.com/MusAG1PpNF

Dessie Farrell has named an unchanged side from that which started the win over Cavan a fortnight ago.

Jonny Cooper was a late addition to the team for that game and keeps his place in the starting XV.

Mayo also opt for no change.

Cillian O'Connor makes his 95th Mayo appearance. He's one of seven Mayo men who started the 2017 decider against the Dubs - David Clarke, Chris Barrett, Lee Keegan, Patrick Durcan, Kevin McLoughlin and Aidan O'Shea being the others.

Recent history, however, has shown us that Mayo are a bit of a pebble in the shoe for the Dubs. The Green and Red have been hard to shake off. To say that they are not resilient is an understatement and they are more than capable of bringing a bit of madness to this final, just as long as they don't concede two own goals.

That fate befell Mayo in the drawn game in 2016. A year later, minus the own goals, they again put it up to the Dubs and came the closest to finally ending their wait for the title. In truth, they have a better team now, a nice mix of old and young. The addition of Eoghan McLuaghlin, Ryan O'Donoghue and Tommy Conroy has made a difference. Conroy, in particular, adding immeasurably to their attacking options.

Doubts persist about them defensively. The way Tipp opened them up early doors the last day was worrying. Quite simply, they will have to be tighter against the Dublin, or else we are looking at a game that could be well decided before the 70 minutes. 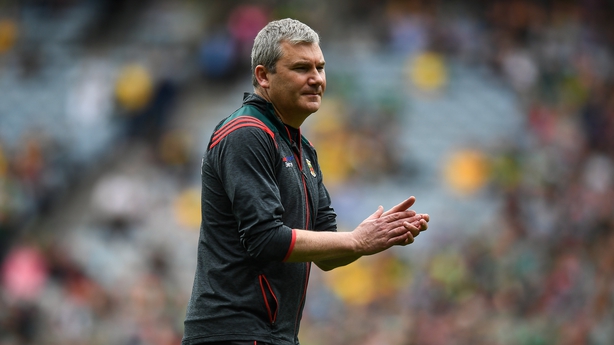 Manager James Horan struck a composed figure when speaking at the recent Mayo press night, and was no less confident where the strengths in his side lie.

"I think the way we play, we take calculated risks," he said.

"We think it's how we play best and our best chance of winning games and that's what we'll do. You see a lot of teams that don't take risks and play it safe, I don't know if they have a chance of winning with that mindset.

"We know what we're about, where we're strong and we'll go after that. There's no doubt about that.

"There's a lot that we're trying to add to our game as well and bit by bit that's coming together as well.

"We've a lot of threats, a lot of danger in our team and we try to utilise that. So we're in good shape physically, we're an athletic team, there's power there.

"When you get all that into the mix and get the ratio right we're a seriously strong team. So we'll be looking to play like that again."

Confident words indeed and if Horan has plan to stifle the impact of Brian Fenton, Ciarán Kilkenny and Con O'Callaghan, then his side could be well on their way to success.

In previewing the game, Tomás O'Se spoke about about Mayo's work-rate and their turnovers, with them scoring 3-12 off them against Tipperary. Dublin, he added are also well capable of winning a high amount of turnovers.

The Dubs will also look to putting a sweeper in front of Cillian O'Connor and Tommy Conroy if, as expected, Aidan O'Shea wanders out the field. There are also questions relating to David Clarke's restarts, and while he had a fair degree of success against Tipp, the champions will ask more questions.

Mayo then have far more on their plate to get right if we are to have a surprise.

My colleague Conor Neville has written about 'Mayo's shot to nothing in a strange year'.

He wraps it up by saying: "After last year's 'end of an era' semi-final defeat, Mayo possibly didn't expect to be back in a final so soon. They've gotten an infusion of young talent and the future looks bright(ish) again. There will be no sleepy transitional period".

Confidence in the capital, hope out west - @John_Kilraine and @patmcgrath take a look at the Dublin and Mayo camps ahead of Saturday evening's All-Ireland SFC showdown #RTEgaa pic.twitter.com/IvoxfZxoCi