ONLINE
Live blog on RTÉ.ie and the RTÉ News Now App from 5.30pm.

WEATHER
Cloudy with patchy rain. Temperatures will range between 20 and 22 degrees. Winds will be light to moderate south to southeast.

Given the annual graduation and renewal involved with underage teams it's rare that they get to build any kind of enduring rivalry.

The switch from U21 to U20 this year has exacerbated that, as just four players from Tipperary and one from Cork, remain from those who played a part in last year's All-Ireland final.

Nonetheless, Saturday's All-Ireland final will be the fourth Championship clash between Liam Cahill and Denis Ring's underage sides in just over 13 months, and a lot of the players involved would also have faced each other at minor level. Goals are the common denominator.

Cork hammered Tipp 2-23 to 1-12 in the last Munster U21 final but the Premier youngsters reversed that result in stunning fashion when the teams met again in the All-Ireland final.

Tipperary had built an early lead but Cork twice fought back and were leading until the fourth minute in injury-time when Conor Stakelum scored a match-winning goal on a 3-13 to 1-16 scoreline.

It was a similar story in Munster this summer when both sides cruised back to the final. The Rebels were two points up heading into injury-time before Jake Morris rattled the net with a superb strike. It finished 3-15 to 2-18 in Tipp's favour.

Jake Morris with a match winning goal for Tipperary! pic.twitter.com/KIJonrcA7o

Morris has scored 2-21 (15f) in three games in between cementing his role as an impact substitute for the All-Ireland winning Tipperary seniors.

Jerome Cahill (2-01 in the semi-final demolition of Wexford) and Paddy Cadell are also in line to be the first double-winners since the class of 2010.

Those three and Eoin Connolly remain from those who featured in last year's All-Ireland final while goalkeeper Ger Collins, young brother of senior netminder Patrick, returns for Cork.

Cork bounced back from their defeat in Munster to pull clear in the second half of their All-Ireland semi-final win over Leinster champions Kilkenny. 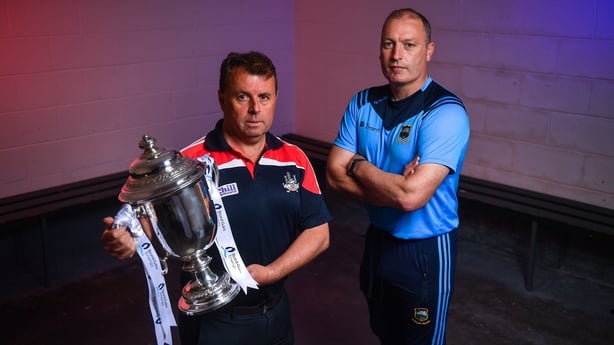 "Every time we meet we seem to bring the best out of one another and Saturday will be no different. That's what comes about when these two teams meet. They've met on numerous occasions at minor and U20 level.

"I think it will be a great game, a real battle and it will go right down to the wire.

"No disrespect to any other team in the competition, I think the two best teams are in the final on Saturday.

"Given they have scored 14 in three games, 11 in the last two, eight against Wexford, who only lost by two points to Kilkenny, they are a goal machine.

"Since they put Jerome Cahill at centre-forward it has added a new dimension to their forward line.

Both Liam Cahill and Denis Ring have named unchanged sides.

"There obviously isn’t the party atmosphere in Cork that there would be in Tipperary at the moment. But there will be no less hunger and desire for an All-Ireland title – it’s a long time since Cork have won an Under-21.

"The All-Ireland final last year was fine margins, we all know what happened in the Munster final a couple of weeks ago. I expect a huge, huge crowd to attend from Cork."