The games are coming hot and heavy - just the way Mayo like it.

After three wins on the bounce inside 15 days they now face two more matches in the coming fortnight, starting with Kerry away in Killarney next Sunday.

Saturday night's round four qualifier win over Galway at the LIT Gaelic Grounds sees them through to the All-Ireland quarter-final Super 8s stage.

"Games are coming hot and heavy and the game-to-training ratio is the way you want it."

Mayo halted their seven-game losing streak across all competitions against Galway, winning their first truly knock-out championship game with the Tribesmen since 1999 by six points in Limerick.

"Our aim was to win the game and get into the Super 8s," said Horan. "We're really happy with the start and the energy we showed throughout the whole game, from some of our newest guys and some of our experienced guys.

"I thought overall the work-rate and effort was very good so delighted with that aspect of it and obviously happy to be heading down to Kerry next weekend."

When asked about the winning margin of three points having twice led in the second half by eight, Horan replied that he wasn't concerned by the final score as long as his team came out on the right side of it.

"We only won by three so I'm more than happy with that," he remarked. "The goal from the free right at the end was crazy so that would make it six points. I don't think there's any story in that. As I said I'm delighted with a lot of stuff.

"We had a lot of goal chances and two of our goal chances I was sure they were frees at a minimum. We went down, got surrounded and the ball went down so it gave Galway a bit of momentum when we had scores on and if we took those scores it would have been different.

"They're the things we're learning from. We're still in there, still fighting and trying to get better. We had Cillian O'Connor and Donie Vaughan their first full games in months.

"Cillian's first game this year and Seamie O'Shea came back on. We're happy tonight that we got through that. It's been a while since we've beaten Galway, by only three points, so we're just delighted to get through."

Lee Keegan also made a late substitute appearance having suffered what looked to be a serious ankle injury in the round three win over Armagh seven days previously.

Horan admits he thought the former Footballer of the Year would be ruled out and hailed his powers of recovery.

"He got a bad injury you all saw last week with his ankle, but he has amazing powers of recovery, he really has, whatever physiology he has," said Horan.

"You saw him on the field there today, he was running well and we’re delighted with that because obviously we thought it was a much longer-term injury. He’s up and running." 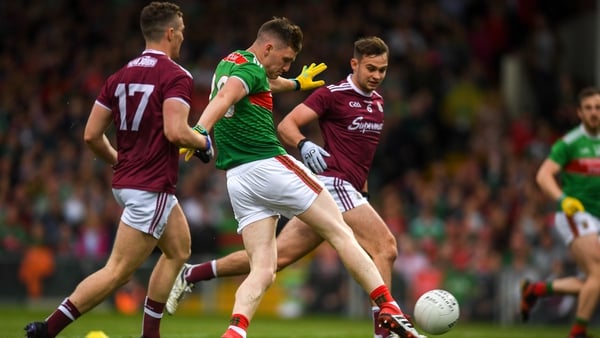 Late goal not enough as Mayo battle past Galway