TV
Live coverage on Sky Sports, with highlights of the game, along with all the weekend's action, on The Sunday Game, RTÉ 2, from 9.30pm.

Ahead of last year's All-Ireland semi-final the expectation was that Tyrone, after sailing through Ulster and then crushing Armagh, would cause Dublin no amount of bother. How wrong we were. Three minutes in and Con O'Callaghan's goal set the Dubs on their way. 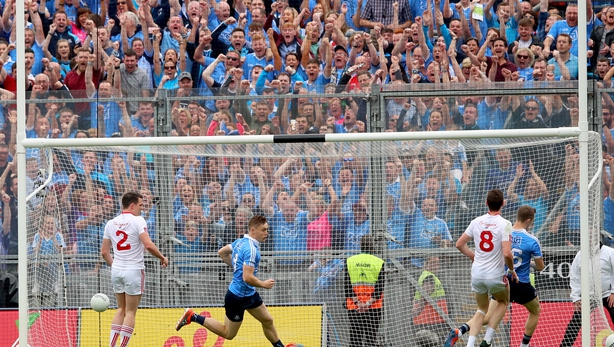 The Red Hand plan of containment and keeping things tight from the outset simply had to change. It didn't. Harte's men were a well beaten docket long before the end.

Nearly a year on and the sides lock horns again in a game that will more than likely decide who tops Group 2 in this new world of the Super 8s.

Tyrone used their get-out-of-jail card to get over Meath in round 1 of the qualifiers and since then have been forcing the scoreboard operators into overtime, more so in their last two games against Cork and Roscommon.

Sean Cavanagh says Tyrone are timing their performances well and have unearthed a couple of players in the qualifiers pic.twitter.com/1uSYzPfLb5

Okay, you can question the strength of the opposition, but clocking up 7-44 against the latter pair.

Against the Rossies, it didn't take long for them to put the foot and neck, pressing down hard by way of swift counter-attacks. The scores followed, and this more offensive approach lead Colm O'Rourke to say that "Tyrone are the team we have to watch now" after the opening weekend.

Certainly, the Ulster side's deployment of Richard Donnelly at full-forward is aiding their scoring thrust and with Lee Brennan, this year's top scorer in Division 1 back for Saturday after a hamstring injury, another potential score getter will be on view.

The word from Mickey Harte and indeed most observers is that Tyrone now face a huge test of their credentials as the All-Ireland champions head to Omagh.

Dublin were far from their swashbuckling best when accounting for Donegal last Saturday, They had many chances to kill the game off long before the final whistle. Indeed, we had the scenes of Dublin players in the last ten minutes playing keep-ball as if they didn't want to score any more.

Maybe they had Healy Park on their minds and the importance of ball posession in what could be an attritional fare against Tyrone. It didn't make for great viewing in what was to be one of the stand-out encounters on the opening weekend of Super 8s.

Jim McGuinness, in his Irish Times column this week, claims that Dublin are now more heavily defensive than ever before, while adding that "the idea that Dublin are some still some kind of advert for flamboyant attacking – for total football – is a delusion that too many are willing to uphold". 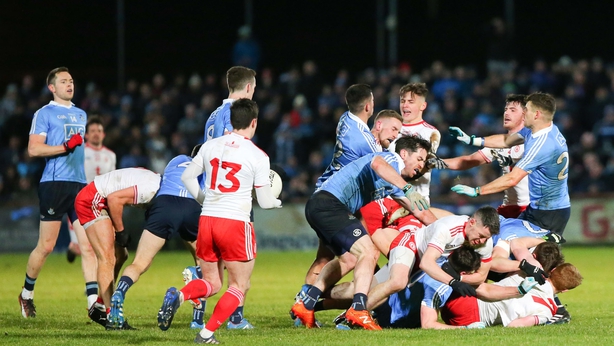 Last February's league meeting between Tyrone and Dublin will have little bearing on this latest coming, but the chill of that evening did bear testament to perhaps a shift in emphasis from Harte's side in terms of their offensive approach. Numerous chances went abegging in their five-point defeat.

A few minor skirmishes also broke out and Tyrone were more than willing to stand their ground. They'll have to do that and more if they are get a first championship win over the Dubs since 2008.

Dublin goalscorer Niall Scully says their performance won't be good enough against Tyrone next week and rejects idea they were 'saving themselves' pic.twitter.com/77DwVNmOX7

That said, the Ulster side will take heart from the fact that against Donegal, Dublin turned the ball over 15 times, losing the ball in contact nearly twice as often as their opponents. The lack of support runners was also evident from the Boys in Blue last weekend.

Some chinks of light for Tyrone and the chasing pack, though that light could be banished if Dublin play puck this weekend.

Tyrone are forced to make one change, as Hugh Pat McGeary takes his place at corner-back with Cathal McCarron missing out after he picked up a knee injury during their comprehensive win over Roscommon last weekend.

Mickey Harte has elected to stick with an otherwise unchanged team although there are some positional changes. Peter Harte is named to start in the half-back line while Mattie Donnelly moves up to wing half-forward for the clash in Omagh.

As for the Dubs, Philly McMahon and Paddy Andrews are in from the start.

Did you know
This will be the ninth championship meeting between the sides - all since 1984. Dublin have won five to Tyrone's two while there has been one draw.

Omagh factor
In the last five seasons, Tyrone have won 13 of their 26 competitive games at Healy Park. They have lost nine and drawn four. Not quite the fortress it would seem.

"If you were to get Dublin in any match, you'd rather it was at home to give you the best opportunity.

"No one is tipping Tyrone to beat Dublin, but we're hopeful we can provide them with their biggest challenge yet"

"But Dublin did win fairly easily in the league in Omagh. If Tyrone can perform well and push the Dubs close, that will be something to build on going into what will likely be a do-or-die game against Donegal (though Roscommon in the Hyde will be no walk in the park for Declan Bonner's team).

"No one is tipping them to beat Dublin, but we're hopeful we can provide them with their biggest challenge yet."