Richard Donnelly, who helped himself to 1-04, Peter Harte, Niall Sludden and Conor Meyler all raised green flags in the first ever Super 8s game.

Tyrone have been accused of a lack of 'marquee' forwards yet relied on the power of the collective with 13 different scorers to surge to the Phase 1 win.

It sets Tyrone up perfectly for next Sunday's home clash with All-Ireland holders Dublin when they will target a sixth consecutive win in this year's Championship.

As for Roscommon, Kevin McStay's side need to regroup quickly as they welcome Donegal to Dr Hyde Park next weekend.

Roscommon dreamed of a rare win in a Championship game at GAA Headquarters having beaten Cavan there earlier in the year in the Allianz league Division 2 final.

But they were outfought and out-thought by a Tyrone side that sent out a serious statement of its All-Ireland intentions.

Roscommon were the only beaten provincial finalist to win their final round qualifier so came into the tie with some momentum.

But it was nothing compared to the benefits Tyrone amassed from navigating all four rounds of qualifiers, for the third time in six seasons.

They're a well drilled, ultra intense side who are working to a clear plan and confident in their ability.

They got on top of Roscommon after an even first 20 minutes or so and turned the screw from there with a highly impressive performance.

Roscommon were just a point down with 22 minutes on the clock at 1-04 to 0-06 and matched the Red Hands virtually score for score.

The difference between the teams at that stage was Sludden's 12th minute goal when Tyrone capitalised on a stray pass from Enda Smith to set up a goalscoring move. 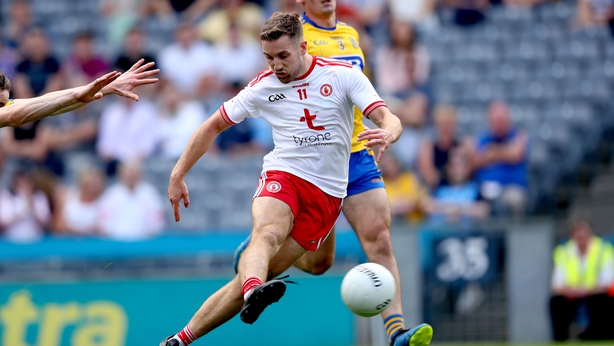 But Tyrone upped their game considerably for the last 15 minutes or so of the half and hit six points without reply.

There's been plenty of commentary about Tyrone's lack of a marquee forward but they're racking up the wins by spreading the scoring burden around.

They had eight different scores in the first-half with three points coming from defenders Michael McKernan, Ronan McNamee and Tiarnan McCann.

Connor McAliskey has been their one consistent scoring threat up front and he was on the mark during that burst of six points.

Peter Harte stretched the gap to seven with a converted free after the restart before Roscommon suddenly came alive again.

Enda Smith powered down the right and blasted a low shot across Niall Morgan in the Tyrone goals.

Ciaran Murtagh tapped over a Roscommon free shortly after and the seven-point deficit was now down to just three.

But it was all Tyrone from there and last year's Ulster champions opened up with some excellent play.

Boss Mickey Harte rolled in his full allocation of substitutes and second-half goals from Meyler, Harte and a late, late Donnelly strike left a wide gap between them.

Harte's goal came from a penalty and Donnelly's was the pick of the bunch as he palmed in after an excellent passing move.