Liz Truss has been confirmed as the new leader of Britain's Conservative Party and will be the next UK Prime Minister.

The 47-year-old will become the third female prime minister in British history tomorrow - following in the footsteps of Margaret Thatcher and Theresa May.

After two months of political instability and a long drawn-out leadership contest, the MP who will replace Boris Johnson as British prime minister was announced shortly after 12.30pm.

Ms Truss defeated rival Rishi Sunak with 81,326 votes to 60,399, after they emerged as the final two contenders from an original field of 11 candidates.

Mr Sunak held a commanding lead in the final round of voting by Tory MPs but it is the estimated 160,000 Conservative Party members who had the final say during the month-long vote.

Afterwards, he said: "It is right that we now united behind the new prime minister, Liz Truss, as she steers the country through difficult times."

In her victory speech at the Queen Elizabeth Centre in Westminster, London, Ms Truss vowed "bold" action to fix her country's worst economic crisis in decades.

She praised her "friend" Boris Johnson stating: "Boris, you got Brexit done, you crushed Jeremy Corbyn, you rolled out the vaccine and you stood up to Vladimir Putin. You were admired from Kyiv to Carlisle."

The outgoing UK Foreign Secretary concluded her speech with a promise to "deliver a great victory" for her party at the next UK general election in 2024.

Liz Truss has been confirmed as the new leader of Britain's Conservative Party and will be the next UK Prime Minister | https://t.co/Bk8iW7WVR8 pic.twitter.com/uOLoEUhrRk

Tomorrow, Mr Johnson is expected to make a farewell address outside No 10 at around 8.30am before departing Downing Street for the last time.

He will fly to Aberdeen in Scotland and will be received by Queen Elizabeth at Balmoral, where he will formally offer his resignation.

Later tomorrow, Ms Truss will also meet with the Queen, where she will be asked to form a government and become prime minister.

The historic audience will be the first time the 96-year-old British monarch, who has faced ongoing mobility issues, has not carried out this key duty at Buckingham Palace.

Ms Truss has, in the past, called for the monarchy to be abolished.

She is expected to fly back to London and arrive at Downing Street for the first time as prime minister at around 4pm.

Ms Truss will make her first appearance as prime minister in the House of Commons on Wednesday.

He said on social media: "I know she has the right plan to tackle the cost of living crisis, unite our party and continue the great work of uniting and levelling up our country.

"Now is the time for all Conservatives to get behind her 100%."

Brexit minister Jacob Rees-Mogg said he was "delighted" that Ms Truss had been chosen to become the next prime minister.

Emerging from the Queen Elizabeth II Centre, Mr Rees-Mogg said: "Delighted Liz Truss has won. It's very good news for the Conservative Party and for the country."

He added: "I think she will be an excellent prime minister."

Leader of the UK Labour Party, Keir Starmer, said on Twitter: "I'd like to congratulate our next Prime Minister Liz Truss as she prepares for office.

"But after 12 years of the Tories all we have to show for it is low wages, high prices, and a Tory cost of living crisis. Only Labour can deliver the fresh start our country needs."

British Liberal Democrat leader Ed Davey called for a general election in the wake of Ms Truss' victory in the Conservative leadership contest.

"Under Liz Truss, we're set to see more of the same crisis and chaos as under Boris Johnson. From the cost of living emergency to the NHS crisis, the Conservatives have shown they don't care, and have no plan," Mr Davey tweeted.

"It's time to scrap the energy price hike then call a general election."

Under Liz Truss, we're set to see more of the same crisis and chaos as under Boris Johnson. From the cost of living emergency to the NHS crisis, the Conservatives have shown they don't care, and have no plan.

It's time to scrap the energy price hike then call a General Election.

Patel says she is returning to back benches

Priti Patel confirmed her plan to resign as Britain's Home Secretary and return to the backbenches in a tweet.

"I congratulate Liz Truss on being elected our new leader, and will give her my support as our new prime minister," her letter to Boris Johnson said.

"It is my choice to continue my public service to the country and the Witham constituency from the backbenches, once Liz formally assumes office and a new home secretary is appointed."

In an interview with GB News, he said: "It is a very good, clear majority for Liz Truss I think gives us a very clear message. The party now has taken its decision.

"We now come back together, get behind the leader of the party and next prime minister, and get on with delivering for people." 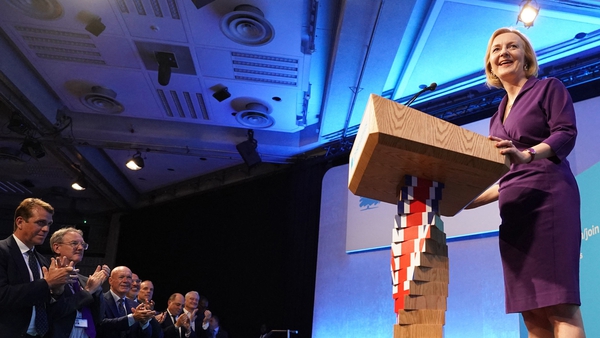 Truss as PM a chance for 'reset' in relations - Taoiseach