"We should not see the image that that we see in movies of a captain steering the ship with a beard through a canal. It isn't like that. These are highly sophisticated, highly complex vessels with the most modern equipment".

Irishman Bill Kavanagh has been at sea for 20 years and has been a captain for eight of them.

He knows all about the Suez Canal after travelling through it on a number of occasions.

The Suez Canal stretches almost 200 kilometers from Port Said on the Mediterranean Sea in Egypt southward to the city of Suez.

Navigating the Suez Canal is an intricate, complex and high-risk process, Captain Bill Kavanagh has said, after a giant cargo vessel veered off course and ran aground in a sandstorm on Tuesday | Read more: https://t.co/lTWteAbhke pic.twitter.com/Z8XRjIuQYN

It took 10 years to build and was officially opened to navigation on 17 November, 1869.

Over the centuries, the 200km manmade waterway became a critical direct route for shipping between Europe and Asia, allowing for passage from the North Atlantic to the Indian Ocean without having to circumnavigate the African continent.

Capt Kavanagh described the historic waterway as a "great feat" of human engineering and said transiting through it was a "fascinating experience".

Throughout history it has been a centre of conflict, a symbol of Egyptian pride and a vital route for international trade.

Capt Kavanagh warned that it is a very complex and high risk operation to get through it. 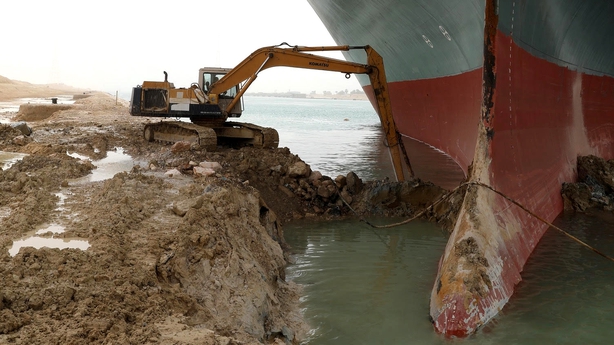 "When a ship is transiting the Suez Canal, the ship is under the conduct of a pilot who advises the captain or master as to how to navigate through the canal and it’s very, very intricate. It’s very complex and it’s a very high risk process" he told RTÉ News.

"Nevertheless, mariners are very professional and they know how to do this. But they very much depend on local knowledge and that’s where the pilot comes in," he said.

This week the waterway made the news for all the wrong reasons as a giant container ship blocks this artery of global trade.

Around 19,000 ships pass through it every year, providing passage for approximately 10% of international maritime trade.

Fears are mounting that it could disrupt global shipments for days or even weeks.

Egypt's Suez Canal Authority said the ship, which is the length of four soccer pitches, ran aground and became lodged sideways across the water on Tuesday after the vessel was caught up in a sandstorm.

Capt Kavanagh, now a lecturer in Lecturer in Nautical Science at the National Maritime College of Ireland, said the sheer size of this 400 metre long vessel cannot be underestimated and that it probably caused a lot of the problems.

"Imagine what it's like when you’re out walking and cycling and a truck drives past with a container. It gives you a bit of a fright, this ship can carry up to 20,000 of those in one go. So they are considerably large" he said.

Even the head of a Dutch company trying to free the MV Ever Given described it as a "beached whale".

"With this size, comes problems because they are very large, there are lot of containers on deck compared to traditional vessels and they present a lot of windage" said Capt Kavanagh.

While these ships have powerful engines, he believes that there is very little the crew could have done if they were hit with a sandstorm unexpectedly.

"So if there’s a gust of wind that’s unexpected, this container area will act like a sail. It can easily destabilise the vessel and blow a vessel off course. When you’re taking about a vessel of so many thousand tonnes of weight, it’s momentum is quite considerable and it’s very hard to stop any movement caused by wind" he added.

According to officials trying to help free the vessel, the ship’s bow and stern has been lifted up against either side of the canal.

The ship’s winches and tug boats are trying to move the MV Ever Given while dredgers have been attempting to clear sand and mud away from the bow.

It is a race against time to prevent more disruption to supply chains and markets as an alternative route, around the southern tip of Africa, can take up to two weeks longer and is more expensive.

While frantic efforts continue to free the ship, Capt Kavanagh said lessons can be learned from this incident.

"The question can be asked if vessels like that should not have additional precautions allowed for. For example, extra tugs to help guide them through the canal in the event of an emergency" he said.

For now that is not a concern for MV Ever Given's Japanese owners.

They are preoccupied with trying to resolve the problem which they say is proving extremely difficult.