France will halt all travel from Britain for 48 hours from midnight including journeys "related to goods transport by road, air, sea or rail", the prime minister's office said, after a new fast-spreading strain of coronavirus appeared in the UK.

While companies are scrambling to shift merchandise across the English Channel with days to go until Britain finally quits EU trade structures, "only unaccompanied freight will be authorised".

"Flows of people or goods towards the UK will not be affected", the government added after a meeting chaired by President Emmanuel Macron.

The decision on air travel was in line with similar measures adopted by Germany, Italy, Austria, Romania, The Netherlands and Belgium.

Britain's Health Secretary Matt Hancock said the new variant is "out of control".

"This genetic variant does not seem to entail, at this stage of knowledge, a heightened seriousness or a resistance to the vaccine," a French government statement said.

The 48-hour window will allow time for coordination among all 27 EU states for a joint policy on travel to and from Britain, as well as preparing for a "safe reopening", the statement said, noting that this will entail testing for Covid-19 before departure.

A spokeswoman for the World Health Organization Europe said that "across Europe, where transmission is intense and widespread, countries need to redouble their control and prevention approaches".

The Irish Government is to impose a 48-hour ban on flights from Britain following fears over the spread of the new strain of Covid-19, while ferries will be limited to freight travel.

The move was agreed by the three coalition party leaders who held discussions this afternoon.

Read more: Q&A - What is the new coronavirus variant?

British Prime Minister Boris Johnson said the infectiousness of the new strain had forced his hand into imposing a lockdown across much of England over the Christmas period.

Scientists first discovered the new variant - which they believe is up to 70% more transmissible - in a patient in September. And Public Health England notified the government on Friday when modelling revealed the full seriousness of the new strain.

But Britain's chief medical officer Chris Whitty pointed out that while the new strain was greatly more infectious, "there is no current evidence to suggest (it) causes a higher mortality rate or that it affects vaccines and treatments, although urgent work is underway to confirm this."

The novel coronavirus has killed at least 1,685,785 people since the outbreak emerged in China last December, according to a tally from official sources compiled by AFP this morning.

And with the onset of colder winter weather in the northern hemisphere where respiratory diseases flourish, countries are bracing for new waves of Covid-19 with tighter restrictions, despite the economic damage such lockdowns wrought earlier this year.

The Netherlands is under a five-week lockdown until mid-January with schools and all non-essential shops closed to slow a surge in the virus. 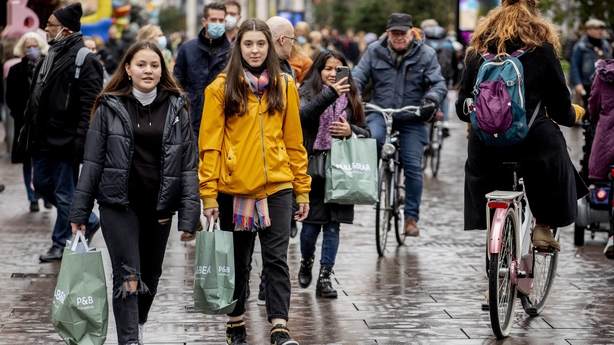 Italy also announced a new regime of restrictions until 6 January that included: limits on people leaving their homes more than once a day; closing non-essential shops, bars and restaurants; and curbs on regional travel.

The rapid roll-out of vaccinations is now seen as the only effective way to end the crisis and the economically devastating shutdowns used to halt its spread.

Europe is expected to start a massive vaccination campaign after Christmas following the United States and Britain, which have begun giving shots with the approved Pfizer-BioNTech vaccine, one of several leading candidates.

Russia and China have also started giving out shots with their own domestically produced vaccines.

On Friday, the United States authorised Moderna's Covid-19 vaccine for emergency use, paving the way for millions of doses of a second jab to be shipped across the hardest-hit country in the world.