Twitter says it is testing a new feature that seeks to limit the sharing of articles by users who have not read them.

The feature - which asks users whether they have read an article before they retweet it - appears to be aimed at slowing the spread of unverified information.

"Sharing an article can spark conversation, so you may want to read it before you tweet it," Twitter's support team said.

Twitter said it would be testing the feature on its Android application "to help promote informed discussion."

"When you retweet an article that you haven't opened on Twitter, we may ask if you'd like to open it first," the company said.

In a reply to one user, Twitter noted, "We wanted to test a way to improve the health of a conversation as it gets started."

But it said users will "always have the option" to go ahead with the retweet.

Brussels has waded into the dispute between US President Donald Trump and Twitter, backing the social media giant's decision to fact-check two tweets by the US leader.

The European Commission's top official on countering disinformation praised Twitter for tagging two claims made by Mr Trump last month about postal ballots in US elections. 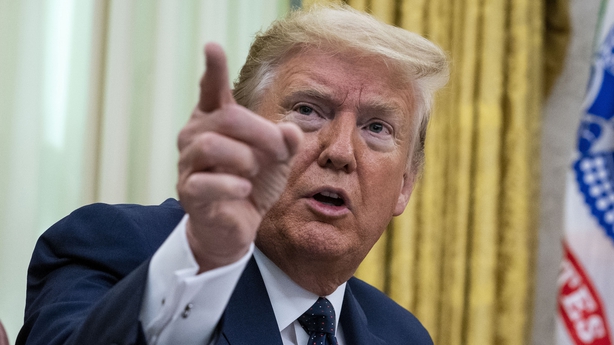 The intervention came as the European Union urged web giants, including Twitter, Facebook and Google, to do more to tackle the "massive wave" of harmful online disinformation triggered by the coronavirus pandemic.

Brussels officials said that while social media platforms had taken steps to counter the deluge of misleading healthcare information and conspiracy theories, their efforts were "not good enough".

President Trump came under fire recently for suggesting Covid-19 patients could be treated by ingesting disinfectant, but it was his tweets claiming mail-in voting would lead to a "rigged election" that sparked the clash with Twitter.

The site added links reading "get the facts" to the two Trump tweets, infuriating the president, who has more than 80 million followers.

European Commission Vice President for Values and Transparency Vera Jourová, who leads the bloc's anti-disinformation fight, said this was the right approach.

"I support the Twitter reaction to tweets of President Trump," she said. "They did not delete it. We all can see it. They provided fact-checked information and promoted facts."

Read more:
Cuomo 'disgusted' at Trump tweet over Buffalo protester
Tens of thousands take part in anti-racism protests across US
Re-election glimmers of hope for Trump amid chaos

Ms Jourová was speaking at the launch of a major policy document outlining the EU's approach to tackling disinformation about the pandemic.

In the report, the bloc also accused China and Russia of mounting targeted propaganda campaigns to undermine democracy and improve their own images.

Since the outbreak of the pandemic, Twitter has challenged more than 3.4 million suspicious accounts targeting coronavirus discussions.

YouTube, which is owned by Google, has reviewed more than 100,000 videos related to misleading virus information and removed more than 15,000 of them.

"They have to open up and offer more evidence that the measures they have taken are working well," she told reporters.

After some platforms were accused of exploiting controversial content to drive revenue from adverts, Ms Jourová said this business model needed to be examined.

"It is also crucial to remove the financial incentives for those who want to benefit from disinformation," she said.

Dubious claims about how the virus originated and spread, and how it can be treated, have spread around the globe.

Conspiracy theories have included claims that the virus was deliberately created to reduce population growth, or that its spread is somehow linked to 5G communications infrastructure.

The EU report said a new approach is needed because of the wide range of dangerous or misleading material appearing online.

While much of it is not illegal, it can still be harmful, such as hate speech, consumer scams and influence-peddling operations by foreign powers.

The 17-page report accuses Moscow and Beijing of "seeking to undermine democratic debate and exacerbate social polarisation, and improve their own image in the Covid-19 context".