Criminal poaching gangs are targeting and attempting to recruit vulnerable people in Kenya who were left unemployed by the collapse of the country’s tourism industry due to the Covid-19 pandemic.

Endangered elephants, lions and giraffes are all at risk of exploitation as poachers take advantage of weakening conservation enforcement measures and those desperate for income.

Around one million tourists visit the African nation every year to see the country’s famous national parks. The money generated is used to employ millions but also protect ecosystems and animals who are on the verge of extinction.

With the tourism sector effectively "shutdown overnight", from the introduction of coronavirus restrictions to curb the spread of the disease, conserving and managing wildlife is facing new challenges, Kaddu Sebunya, CEO of the African Wildlife Foundation told RTÉ News.

As many fawn over a fox savouring an empty Grafton Street and mountain goats running riot in north Wales, some of the world’s most precious animals are further under threat due to the pandemic.

Taking care of wildlife in Kenya is divided between government and private conservancies, the latter can be owned by individuals or communities.

While the government has doubled down on enforcing ranger patrols with wardens wearing PPE, it is a different story for privately owned conservancies who do not run their services from a national budget.

Rather tourism revenue drives these parks which protect over two-thirds of Kenya’s wildlife.

"We have a community in northern Kenya that made over $300,000 last year in 2019 from tourism. This year they are projecting zero revenue" said Michael O’Brien-Onyeka, Conservation International's Senior Vice President for the Africa Field Division.

Speaking from Nairobi to RTÉ News, Mr O’Brien-Onyeka said if private conservancies, who some are "historic guardians" of these ecosystems, do not get help with funding to pay rangers, the area will become weak and a "free for all".

While the Kenyan govt continues its ranger patrols in national parks, it's different for private/community led conservancies who take care of 65% of Kenya’s wildlife. No money = decreased wages / staff let go = weakening of anti-poaching measures (3/7) pic.twitter.com/718hutyYbL

But it already has led to a rise in poaching.

The abrupt end to the tourism industry lead to an increase in poverty with not only rangers let go, but hospitality staff.

Alarming increases in bushmeat hunting has been reported in Kenya because of restrictions on mobility to buy meat from shops but also having no means to afford it.

Giraffes are of a particular concern to the African Wildlife Foundation.

"I think the biggest worry right now is on bushmeat. As people and poverty increase people are going to take bushmeat as a protein. That has implications for lions because if giraffes are killed and that’s food for lions. It has a real connection," said Mr Sebunya. 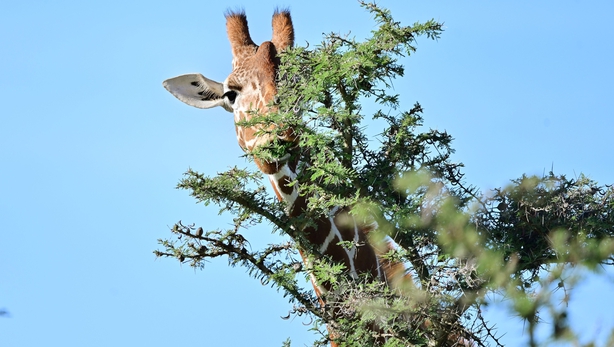 Even though not endangered, the poaching of zebras, antelopes and buffalos is on the rise which is a worry for Colman O’Criodain, Policy Manager of WWF's Wildlife Practice.

"[Buffalo is] relatively common but we couldn’t let that go in indefinitely… they wouldn’t be able to sustain that for very long if that pattern was to emerge" said Mr O’Criodain, who is from Ireland but lives in Kenya.

Gangs also see this desperation for food and money as an opportunity to take advantage of local knowledge of the parks to step-up poaching efforts.

"People are hungry, they have no incomes. People turn to wildlife as a source of protein with bushmeat or they can be recruited by the criminal syndicates that are going to take advantage of poverty" Mr Sebyna from the African Wildlife Foundation said.

Millions have been let go from tourism-related jobs. Ppl have no incomes, are hungry & are turning to wildlife for protein. @AWF_Official & @WWF are worried about giraffes, antelopes, zebras and buffalos being killed by humans for food (5/7) pic.twitter.com/4nOqH4sZHG

Organised criminal syndicates which run poaching schemes thrive in poverty, disorganisation and corruption, according to Mr O’Brien-Onyeka from Conservation International.

"They effectively become the only employers in the area. When somebody is desperate, you would take five dollars to ten dollars to just shoot the last elephant you saw is or rhino" he said.

Rhinos are a target for their horns, which are estimated to be worth $65,000 per kg on the Asian black market.

"The community doesn’t know how much these rhinos are… what’s the real value in the market. They have no access to the criminal market so they just take the handout they can get to feed their community and families and put food on the table. I fully understand where they might be coming from," Mr O’Brien-Onyeka added.

What is at risk is more than 30 years of effort and investment in conservation, according to the Kenya Wildlife Conservancies Association.

Kenya has come a long way from crisis levels of poaching when rhinos, elephants and lions were on the way to being wiped out.

During the 1980s, it is thought that more than half of Africa’s elephants were killed, by mostly poachers who were hunting for ivory.

Selling elephant ivory is banned in a number of countries but the ancient demand still exists. Ivory can be more expensive per ounce than gold and many pay extraordinary amounts for the decorative treasure.

Kenya has gone on to run one of the most effective anti-poaching efforts in Africa and has seen its elephant and lion population growing.

However, this pandemic has seen communities hunt for food and gangs take advantage of the weakening of conservation enforcement to kill endangered wildlife for commercial purposes.

A 40-year-old elephant was poached for ivory in northern Kenya in April - the first case of illegal hunting in the area in more than a year.

"Even though it makes that big money, that money doesn’t trickle down. It solely benefits one or two individuals from the community" said Michael O’Brien-Onyeka.

An elephant can add more to the community alive than dead but it is becoming increasingly difficult for people "to do the right thing" in desperate times, he said.

While it is challenging to collect figures about the number of poaching incidents and the killings are not to the scale seen decades ago, there have been increased reports around the world.

Targeted for their horns by poachers, the critically endangered black rhinos in Botswana’s Okavanago Delt have been evacuated from the area after at least six of them were killed by poachers in March.

In South America, Panthera has also reported an increase in the poaching of wild cats like jaguars and pumas during Columbia’s lockdown. The big cat conservation organisation said it recorded the killing of five jaguars, one puma and one ocelot in the northwest of the country, but the true number could be a lot larger.

Freshwater dolphins, hailed for the medical properties from their fat and oil, have been found gutted in Bangladesh this month - sparking fears fisherman are taking advantage of the virus shutdown to exploit the endangered creates.

Those taking advantage of the weakness in the anti-poaching enforcement is not the only threat to animals.

Measures have been taken to shield mountain gorillas in the Virunga national park of the Democratic Republic of Congo over fears that they may be vulnerable to complications from catching Covid-19.

As airports and borders remain shut across many countries, the African Wildlife Foundation is pleading to authorities to check items in transit once travel resumes.

"When things reopen again we need to be careful what leaves the country in terms of international wildlife trade" he said.

Opening up travel to tourism is unlikely to be this year. International tourism is facing its worst crisis since records began with the travel industry predicted to see an 80% decline in international arrivals this year amid the Covid-19 pandemic.

In the meantime, a review of the tourism model in Kenya is necessary to make sure this funding shortfall does not happen again, according to the WWF’s Colman O’Criodain.

He said that national or international stimulus packages need to take tourism into account to not only protect the interests of the wildlife but the economy.

Mr O’Criodain, who is from Ireland but lived in Kenya for three years, suggested looking at making the sector more sustainable, by "adding value" to the tourist product.

"Like what Botswana do, by just offering a more expensive product that relies on smaller numbers and also by fostering domestic tourism," Mr O’Criodain said.

While Michael O’Brien-Onyeka agrees that alternative incomes and new methods need to be looked at to shift a reliance away from tourism funding, a respect for animals should be the main lesson from this pandemic.

It is not a question of if but when there will be another animal-borne virus, he said, because destroying tropical forests leads to easy access to kill or kidnap wildlife and take them to wet markets.

"So the more we take wildlife from their natural habitat to wet markets, into heavily populated urban centres. We are the ones asking for trouble and that’s why we have zoonotic linked pandemics" he added.

The parting word from Michael O’Brien-Onyeka was a plea to reflect on our relationship with animals to save them but also ourselves.

"The old normal was chaotic. It was wrong. It’s an opportunity for us to identify what is actually important to us as a species. Securing critical ecosystems on this planet including wildlife and their habitat should be number one, in our own self interest" he concluded.

Irish in Melbourne: 'We have never felt so far away'

States of Mind: The anti-Trump Republicans in the president's head