A US cruise ship blocked from several Asian ports over concerns that a passenger could have been infected with the new coronavirus has docked in Cambodia, as frustrated holidaymakers expressed hope their ordeal may soon be over.

The Westerdam was supposed to be taking its 1,455 passengers on a 14-day cruise around east Asia, beginning in Hong Kong on 1 February and disembarking on Saturday in Yokohama, Japan.

But the ship was turned away from Japan, Guam, the Philippines, Taiwan and Thailand over fears of the novel coronavirus epidemic that has killed more than 1,300 people in China.

Cruise operator Holland America has insisted there are no cases of the SARS-like virus on board and Cambodia announced yesterday that the boat would be able to dock in Sihanoukville, on its southern coast.

By evening, the ship moved into the beach town's port, moving past the small fishing vessels that usually ply the waters.

As it slowly approached the pier, people onshore snapped selfies of themselves with the massive vessel.

The mood was equally buoyant on the boat.

"Thank you Cambodia! You believed in us when no one would!" tweeted passenger Lydia Miller. 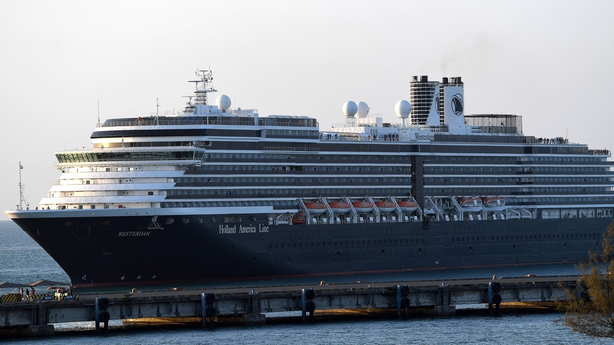 But all passengers would have to remain onboard until flights have been arranged, said provincial governor Kuoch Chamroeun.

"The arrangement of the planes to take them from (Sihanoukville) airport to Phnom Penh airport is under way," he said, explaining that three flights were scheduled for tomorrow.

Buses were lined up by the pier ready to transfer passengers to Sihanoukville's airport. Holland America has said they would foot the bill to return all guests.

Before the ship docked, doctors conducted health checks for the passengers.

The samples of 20 on board who were sick were sent to the Pasteur Institute in Phnom Penh to test for the virus, said transport minister Sun Chanthol.

Dr Michael Ryan of the World Health Organization today gave an update on the cruise ship quarantined in Japan, and the one docked in Cambodia.

He told the briefing: "Regarding the Diamond Princess cruise ship which is currently quarantined in Yokahoma, 218 passengers have tested positive for the virus, which does represent the largest cluster of Covid-19 cases outside of China.

"There are also negotiations under way to allow elderly patients to leave the ship, and that's currently being negotiated and discussed."

Referring to the Westerdam cruise ship docked in Cambodia, Dr Ryan said all people remain onboard as a "precautionary measure".

He said: "Cruise doctors and others on the ship have seen some people with very mild upper respiratory symptoms.

"While those tests are being completed, all of the people remain onboard, but that's been a purely precautionary measure at the moment."

Cambodian premier Hun Sen is a staunch Chinese ally and has been vocal in his support of Beijing's handling of the epidemic, even going so far as to visit China last week in a show of solidarity.

"The permission to dock is to stop the disease of fear that is happening around the world," he told state-affiliated media website Fresh News.

"We must help them when they asked us for help," he added.

Both Seabourne Ovation and Quantum of the Seas were allowed to dock, and passengers to alight for roughly ten hours as part of the scheduled stop.

"They were all checked by their doctors on the ship, and we also examined them when they disembarked," Phuket governor Pakapong Tawipat told AFP.

He added that the passengers and the crew members "were not Chinese", and that Phuket was part of their regular routes, unlike the Westerdam.

Japan's premier Shinzo Abe expressed worries last week over a possible infection on the Westerdam, and said measures will be taken to "reject entries" for foreigners into the country.

Cambodia has one confirmed case of the virus.