China's top leadership has admitted "shortcomings and difficulties" in its response to the coronavirus outbreak, as state media said a new hospital built at breakneck pace began receiving patients in Hubei province.

The death toll in China stood at 425, exceeding the 349 mainland fatalities from the Severe Acute Respiratory Syndrome (SARS) outbreak of 2002-03, which killed nearly 800 globally.

Hong Kong has confirmed the first fatality from the virus - a 39-year-old man - the second death outside mainland China since Sunday.

Japan has quarantined a cruise ship carrying 3,500 people and is testing passengers for coronavirus, after an 80-year-old passenger who disembarked in Hong Kong tested positive.

The four Thai people included a couple who had visited Japan and two drivers who had picked up Chinese passengers in Thailand, the health ministry said.

The new cases brought the total reported in the country to 25.

Over 230 Australians evacuated from China have been flown to Christmas Island in the Indian Ocean, where they will be held in quarantine for two weeks, the maximum incubation period of the coronavirus.

The United States has reported its second case of human-to-human transmission, taking the number of cases in the US to 11.

The virus has spread to more than 20 countries.

Journalist Yvonne Murray, who is in the UK having left China with her family, said it is unusual for China's leadership to admit shortcomings in its handling of the outbreak.

Speaking on RTÉ's Morning Ireland, she said a doctor in Wuhan was detained and punished after he warned of a new SARS-like illness last year.

She said the crisis has also shone a light on the major deficiencies in China's public health system.

As it races to try to contain the spread of the virus, China's Politburo Standing Committee called for improvements to the "national emergency management system" following "shortcoming and difficulties exposed in the response to the epidemic," according to the official Xinhua news agency.

"It is necessary to strengthen market supervision, resolutely ban and severely crack down on illegal wildlife markets and trade," the Politburo said in a meeting yesterday, Xinhua reported.

The government also said it "urgently" needed protective medical equipment such as surgical masks, protective suits, and safety goggles as it battles to control the outbreak.

Authorities in provinces that are home to more than 300 million people - including Guangdong, the country's most populous in south China with 113 million people - have ordered everyone to wear masks in public. 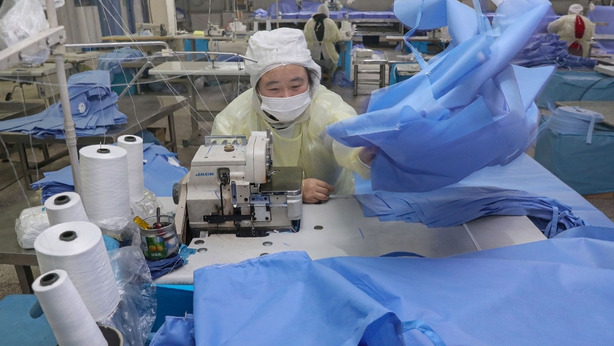 But factories capable of producing around 20 million masks a day are only operating at 60-70% of capacity, industry department spokesman Tian Yulong said, adding that supply and demand remained in "tight equilibrium" as a result of the Lunar New Year break.

Mr Tian said authorities were taking steps to bring in masks from Europe, Japan and the United States, while the foreign ministry said countries including South Korea, Japan, Kazakhstan and Hungary had donated medical supplies.

Most of the deaths have been in Wuhan and the rest of surrounding Hubei province, most of which has been under lockdown for almost two weeks.

With more than 20,400 confirmed infections, the mortality rate for the new coronavirus is much lower than the 9.6% rate for SARS.

In Wuhan, where the virus is believed to have jumped from animals at a market into humans, authorities have been racing to build two new hospitals to treat the infected.

The first of those - a 1,000-bed facility - "began to receive" patients, the People's Daily reported, just 10 days after construction began, but no details were offered about how many. 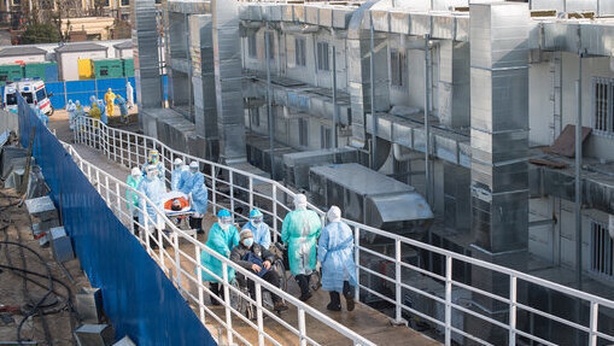 The second hospital is due to open later this week.

The Shanghai stock market plunged almost 8% yesterday on the first day of trading since the holiday as investors played catch-up with last week's global retreat.

In Wuhan, which has been transformed from a bustling industrial hub into a near-ghost town, residents have been living in deep fear of catching the virus.

The city's medical facilities have been overwhelmed, with Xinhua reporting that 68 medical teams of 8,300 staff had been sent to Hubei.

The emergence of the virus coincided with the Lunar New Year, when hundreds of millions travel across the country for family reunions.

Originally scheduled to end last Friday, the holiday was extended by three days to give authorities more time to deal with the crisis. 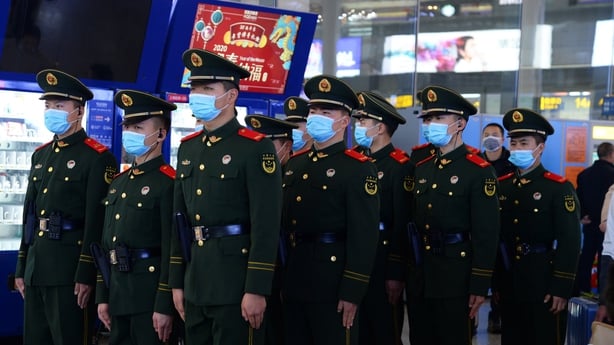 But some major cities - including Shanghai - extended it again, and many schools and universities have delayed the start of new terms.

Road, train and air traffic were all significantly down on Sunday, when hundreds of millions of people would have been expected to return to their cities of work, the transport ministry said.

Many companies offered staff the option to work from home or defer travel, or simply remained closed.

Many nations have evacuated hundreds of their citizens from China - with some forcing them into quarantine on their return - and more airlines are cancelling services to the mainland.

China's foreign ministry criticised the United States for being among the first to evacuate nationals without providing "substantial assistance" to China.

The US actions had caused "panic", said spokeswoman Hua Chunying.

Mongolia, Russia and Nepal have closed their land borders, while semi-autonomous Hong Kong announced yesterday that it was closing all but two land crossings.

The Cruise Lines International Association, which represents some of the world's largest operators, said vessels will deny boarding to passengers and crew who have recently travelled to China.

Macau said it will temporarily close all casinos and many other entertainment venues as the gambling hub battles the deadly coronavirus, cutting off the lifeblood of the city's economy.

The move came as the former Portuguese colony confirmed its tenth case of the virus, which has killed more than 400 people in China, infected tens of thousands, and spread to more than 20 countries.

Chief Executive Ho Iat-seng, a pro-Beijing appointee who took office in December, said the gambling industry would close for two weeks, but warned that could be extended if the virus continues to spread.