Dutch intelligence has information that a Ukrainian airliner that crashed in Iran was probably hit by a missile, the prime minister has said, becoming the latest western country to suggest the plane was brought down.

The US, Canada and Britain have already suggested that the crash - in which all 176 people on board the plane were killed - was caused by an accidental missile strike by Iranian forces, but Tehran has dismissed the claims.

"Based on the information from the MIVD (Dutch military intelligence), we can confirm that it is likely that an Iranian anti-aircraft missile has led to the crash of the aircraft," Prime Minister Mark Rutte told a press conference.

Mr Rutte gave no further details about the information or how the Netherlands, which did not have any nationals on board the Ukrainian Boeing 737, obtained it.

"There are procedures between allies for sharing this kind of information, but these are internal for security and military agencies," he said.

The crash happened after Iran launched missiles at US forces in Iraq in response to the killing of a top Iranian general in a US drone strike in Baghdad.

Mr Rutte has offered Canadian premier Justin Trudeau "all the support that the Netherlands can offer" after Mr Trudeau called him to ask about his experiences with MH17, the Dutch press agency ANP said.

Malaysia Airlines flight MH17 from Amsterdam to Kuala Lumpur was shot down over eastern Ukraine in 2014 with the loss of 296 people on board.

Investigators say a missile fired by pro-Russian separatists was to blame and the trial of four people over the crash is due to start in the Netherlands in March.

Dutch Foreign Minister Stef Blok said in Brussels that it was "indeed very likely that the plane has been shot down by Iranian missiles".

"Unfortunately the Netherlands has experience from MH17," he said. 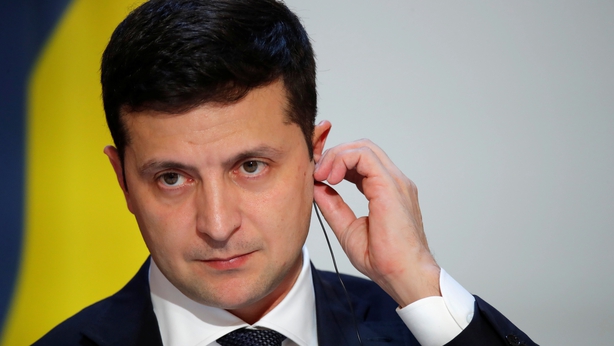 Earlier, Ukraine's President Volodymyr Zelenskiy said that the possibility a missile downed the plane had not been ruled out but it had not been confirmed yet.

He said he would discuss the investigation with US Secretary of State Mike Pompeo.

"The version about a missile hitting a plane is not ruled out, but it has not been confirmed yet," Mr Zelenskiy said on Facebook.

"Given the recent statements by the leaders of the states in the media, we call on all international partners, notably the governments of the United States, Canada and the United Kingdom, to submit data and evidence concerning the disaster to the commission which investigates the causes," he added.

He discussed the investigation into the plane crash with his Iranian counterpart Hassan Rouhani yesterday,  who said that Iran would provide the Ukrainian expert group with prompt access to all the necessary data.

"President Volodymyr Zelensky and I met with US representatives," Mr Prystaiko said in a post on Twitter. "We have received important data which will be processed by our experts."

Hundreds of mourners held a candle-light vigil last night in Toronto to remember the 176 people killed when Flight 752 crashed shortly after take-off from Tehran's Imam Khomeini International Airport on Wednesday.

The dead included 63 Canadians and many others headed for Canada.

The Ukrainian government said it was investigating reports of debris from a Russian-made Tor-M1 missile.

The Tor, also called the SA-15 Gauntlet by NATO, is a short-range "point defence" system that integrates the missile launcher and radar into a single tracked vehicle.

It is designed to be mobile and lethal against targets at altitudes up to 6,000 metres (20,000 feet) and at ranges of 12km, according to the Federation of American Scientists, which researches and analyses "catastrophic threats to national and international security".

To attack a target, the Tor operator must identify it on the radar screen and direct the missile to launch.

Commercial air flights have transponders, which are radio transmitters that broadcast their identity, speed and altitude at an internationally agreed frequency.

There were several other civilian aircraft nearby when Flight 752 crashed just a few kilometres from the airport.

All of those aircraft would have been visible on the radar screen of the Tor battery, as well as civilian radar at the airport.

Iran fields "small numbers" of Tor systems, the Center for Strategic and International Studies said in a report last year.

Yesterday, a US official, citing an extensive review of satellite data, said Washington had concluded with a high degree of certainty that anti-aircraft missiles brought the plane down.

The official said the Boeing 737-800 had been tracked by Iranian radar. Iran denied that the airliner had been hit by a missile.

Riki Ellison, a defence expert and founder of the Missile Defense Advocacy Alliance, said it would have been impossible to divert the missiles after launch, even if the ground operators realised their error.

"Once you shoot those things, it's over," Mr Ellison said.

US, Canadian and French representatives are to travel to Tehran to attend meetings for the Iran-led investigation into the crash, Iranian state media reported.

The European Union has demanded an "independent and credible" probe into the crash.