Australian authorities have begun assessing the damage from massive bushfires that swept through two states yesterday, as cooler conditions provided a temporary respite from the blazes.

Light rain and cooler temperatures in the southeast of the country were a welcome change from the searing heat that has fuelled the devastating fires, but officials warned they were not enough to put out almost 200 fires still burning.

"It certainly is a welcome reprieve, it is psychological relief if nothing else," New South Wales (NSW) state Rural Fire Service Commissioner Shane Fitzsimmons said.

"But unfortunately it is not putting out the fires."

Tens of thousands of homes in both NSW and Victoria states were without power as a large-scale military and police effort continued to provide supplies and evacuate thousands of people who have been trapped for days in coastal towns by the fires.

Initial estimates put damaged or destroyed properties in the hundreds, but authorities said the mass evacuations by residents of at-risk areas appear to have prevented major loss of life. 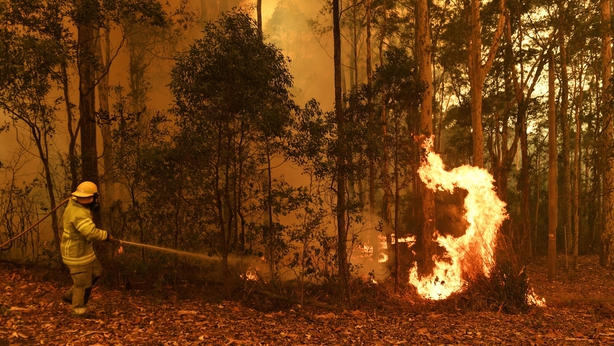 Twenty-four people have been killed since the start of this year's wildfire season.

Fire officials said temperatures were expected to rise again during the week and the next major flashpoint would come by Thursday, but it was too early to gauge the likely severity of the threat.

"The weather activity we're seeing, the extent and spread of the fires, the speed at which they're going, the way in which they are attacking communities who have never ever seen fire before is unprecedented," NSW Premier Gladys Berejiklian said.

"We're in uncharted territory," Ms Berejiklian said. "We can't pretend that this is something that we have experienced before. It's not."

Authorities have struggled to keep pace with the severity of the crisis - which has scorched an area almost the size of Ireland.

Thousands of people have been evacuated from coastal towns at the peak of the summer holiday season, in one of the biggest coordinated operations since the evacuation of Darwin after Cyclone Tracy flattened the northern city in 1974. 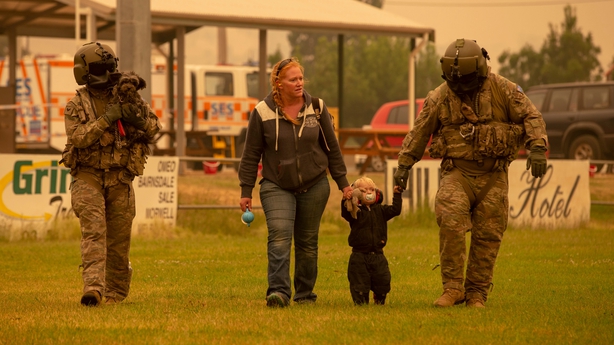 Up the coast, thousands of people remained displaced and many more are weighing an uncertain future.

Noreen Ralston-Birchaw, 75, lost her home in Mogo on New Year's Eve and said she was unsure what to do.

Prime Minister Morrison also announced the establishment of a Bushfire Recovery Agency, that will run for two years and help survivors get back on their feet, a signal that the path ahead will be long and difficult.

Australia has been battling blazes across much of its east coast for months, with experts saying climate change has been a major factor in a three-year drought that has left much of the country's bushland tinder-dry and susceptible to fires.

As smoke cleared, about 350 people were due to be airlifted out of the Victorian town of Mallacoota, where around 1,000 people were evacuated by sea on Friday.

That would leave about 400 people who had chosen to stay in the community, The Age newspaper reported.

Celebrities have pledged or raised millions of dollars to support firefighters and fire-affected communities, including US pop star Pink, who tweeted yesterday that she was donating US$500,000.

I am totally devastated watching what is happening in Australia right now with the horrific bushfires. I am pledging a donation of $500,000 directly to the local fire services that are battling so hard on the frontlines. My heart goes out to our friends and family in Oz ❤️ pic.twitter.com/kyjDbhoXpp

"Our family's support, thoughts and prayers are with everyone affected by the fires all over Australia," she posted on Instagram. "We are donating $500,000 to the Rural Fire Services who are all doing and giving so much right now."

No fires were burning out of control in the New South Wales, but four fires in Victoria had Evacuate Now or Emergency Level warnings.

A threat earlier to the NSW town of Eden had eased by late afternoon, and authorities said evacuation was no longer necessary.

Haze from the fires was turning skies orange as far away as New Zealand; police there asked people to not call the emergency phone number.

In Canberra, officials asked for 100,000 extra breathing masks from the national stockpile as the country's capital recorded the worst air quality in the world today, according to the IQAir Air Visual global index.

The masks are expected to arrive tomorrow.

The death of a 47-year old man who was defending a friend's rural property in NSW took the national toll this season to 24.

More than 5.25 million hectares (13 million acres) of land has been burnt this fire season. Almost 1,500 homes have been destroyed in NSW state alone.