New Zealand troops have launched a mission to recover bodies from the still-active White Island volcano.

Two military helicopters set off from Whakatane at first light for the volcano off the North Island where an eruption last Monday is believed to have resulted in at least 16 deaths.

At the same time, police took grieving families out near the island on a boat and a Maori blessing was performed.

Authorities say eight bodies remain on the volcano and - after coming under pressure from distraught families - they approved a recovery mission despite a 50-60% chance it will explode again in the next day or so. 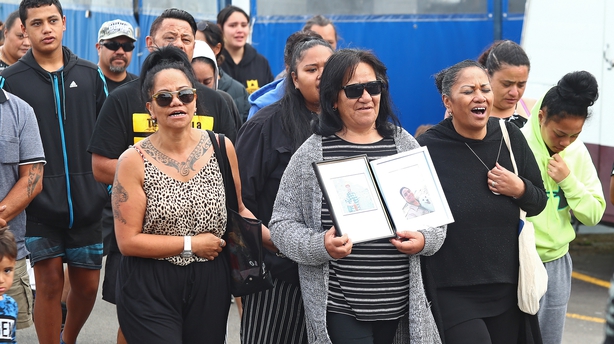 Volcanologists will monitor live feeds of seismic activity from the still-smouldering volcano as the eight-strong military team attempt to extract the bodies, ready to call off the operation if signs point to another eruption.

"Of course I'm worried, I would be inhuman if I did not worry," deputy police commissioner Mike Clement said when he outlined the plan, adding "we have a job to do".

With the help of drone flights and helicopter pilots who were near the volcano immediately after the eruption, authorities have located six of the eight bodies on the island.

The plan is to immediately recover the six bodies and search for the other two, then transport them to military frigate HMNZS Wellington anchored off the coast, Mr Clement said.

The operation is expected to take several hours.

Prime Minister Jacinda Ardern earlier expressed empathy with the grieving families, but insisted "everyone is desperate to get those victims back".

"We are all in exactly the same place and wanting to make sure that as soon as possible, as soon as we can, that recovery operation begins," she said.

After days of caution and focusing on the risk to rescuers, police have indicated they now see the recovery as a race against time, and the longer the operation was delayed, the less chance there was of returning identifiable remains to grieving families.

On White Island poisonous gases are still billowing from the volcanic vent and the island is blanketed in a thick layer of acidic ash.

While officials weighed how to recover bodies of the dead, 22 people, mostly tourists who had been on a day trip to see the natural wonder, are still being treated in hospital, many in a critical condition suffering severe burns.

"All those patients whose condition is still listed as critical, they are very unwell and require a lot of intensive care," Ministry of Health director-general Ashley Bloomfield said.

The survivors' injuries were so severe New Zealand doctors initially estimated they would need to import 1.2 million square centimetres of skin for grafts, although some victims are now being moved overseas to ease the strain on hospitals.