Police in New Zealand have launched an investigation into the circumstances that placed 47 people in harm's way as an active volcano erupted on White Island yesterday.

Police have raised the death toll from five to six, saying the latest victim died in hospital. Police also doubted whether any more survivors would be found.

Prime Minister Jacinda Ardern said reconnaissance flights showed no signs of life on the island, as eyewitnesses detailed the severe burns suffered by those caught up the eruption.

"The scale of this tragedy is devastating," Ms Ardern said in parliament.

"To those who have lost or are missing family and friends, we share in your grief and sorrow and we are devastated."

Police said 47 people were on the uninhabited island at the time of the eruption - 24 from Australia, nine from the United States, five from New Zealand, four from Germany, two each from China and the UK and one from Malaysia.

"I would strongly suggest that there is no one that has survived on the island," police Deputy Commissioner John Tims said of the eight people still missing.

Of the 31 injured, at least 27 suffered greater than 71% body surface burns, and some could succumb to their wounds, said Peter Watson, the government's chief medical officer.

Burns units in the country are full to capacity, he added.

Police said an investigation into the deaths on White Island had been launched but clarified it was not a criminal investigation.

Ms Ardern said: "The focus this morning is on recovery and ensuring police can do that safely".

She singled out "our Australian family" for sympathy, while her Australian counterpart Scott Morrison warned his compatriots to brace for "a very hard day".

Mr Morrison said there were fears that three of the six dead were Australian, and another eight citizens were unaccounted for.

He described the tragedy as a "time of great innocence and joy interrupted by the horror of that eruption".

"This is a very, very hard day for a lot of Australian families whose loved ones have been caught up in this terrible, terrible tragedy," he told reporters in Sydney.

White Island Tours, a trip operator, confirmed that two of its guides were unaccounted for, while Britain's high commissioner in Wellington said two female citizens were hospitalised.

"We will only go to the island when it is safe to do so for our people," police spokesman Bruce Bird said.

He said a helicopter scoured the area for 45 minutes, checking if anyone was still alive - without success.

The eruption at White Island -  also known as Whakaari - thrust a thick plume of white ash 3.6km into the sky. 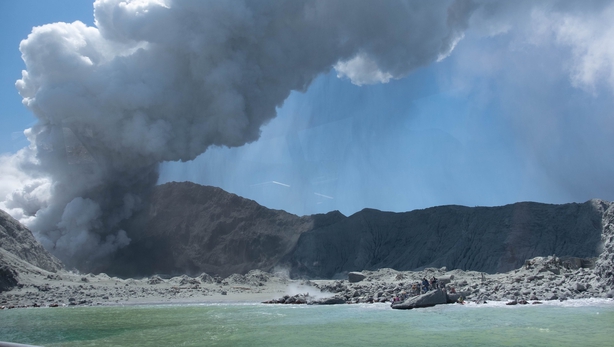 The island is about 50km offshore in the picturesque Bay of Plenty and attracts more than 17,000 visitors every year.

When the blast occurred, it was being visited by a group of more than 30 people from a Royal Caribbean cruise ship, the Ovation of the Seas, which left Sydney on a 12-day voyage last week.

Seconds before, live camera feeds showed a group of more than a half dozen people walking on the crater floor. Then the images went black.

The threat level at the volcano had been raised in recent days, and questions are already being raised about whether it was safe for tour groups to visit.

Cruise operator Royal Caribbean had sold a day trip to White Island as an "unforgettable" adventure to New Zealand's most active volcano, one that took visitors so close to the action they could require gas masks and hard hats.

White Island Tours said it "operates through the varying alert levels" but that "passengers should be aware that there is always a risk of eruptive activity regardless of the alert level". 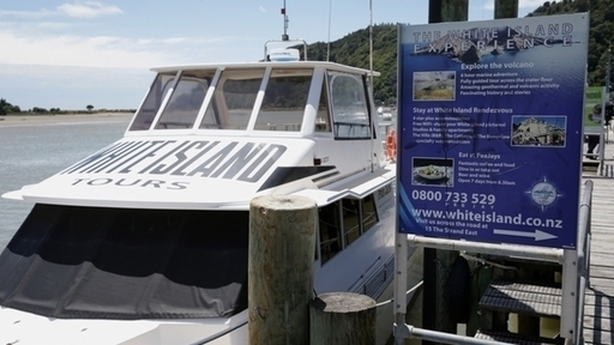 Ms Ardern said there were legitimate questions to be asked but they could wait until the emergency response was complete.

"The focus today is on providing critical care for those who have been injured," she said.

Scientists said there had been increased activity at the volcano over the past week - but nothing to indicate an eruption was imminent.

"The eruption was unfortunate but not completely unexpected," said Jessica Johnson, a geophysicist at the University of East Anglia.

She said levels of activity "have been relatively high since September, and even more elevated over the last couple of weeks," with small earthquakes and more volcanic gas detected than usual.