A 27-year-old woman has died at a Venezuelan clinic after being shot in the head during anti-government protests in Caracas, a human rights organisation has said.

The death came amid protests called for by the opposition leader Juan Guaido's who had asked Venezuelans to take to the streets in a bid to force President Nicolas Maduro from power.

46 people are reported to have been injured in May Day clashes between opposition supporters and Venezuela's armed forces in Caracas.

The standoff has increased tensions between the United States and Russia, who accused each other of interference in the OPEC-member nation's affairs.

Mr Guaido had called for the "largest march" in Venezuela's history and said on Twitter that "millions of Venezuelans" were in the streets in "this final phase" of his move to oust Mr Maduro.

However by late afternoon, many of the protesters in the capital Caracas were drifting home.

Despite Mr Guaido's calls for the military to support him, the armed forces leadership has so far remained loyal to Mr Maduro, who has been in power since 2013.

The Venezuelan opposition has often staged huge street protests against Mr Maduro but has failed to dislodge him despite a deep economic recession and hyperinflation.

Mr Guaido faces a challenge to keep up the momentum.

Some protesters in Caracas, their faces covered in shirts, threw projectiles from an overpass at National Guard officers below, who responded by firing tear gas canisters.

"If the regime thought we had reached maximum pressure, they cannot even imagine," Mr Guaido told thousands of cheering supporters. "We have to remain in the streets."

Some supporters are frustrated that nothing has changed more than three months after Mr Guaido, head of the opposition-run National Assembly, invoked the constitution to assume an interim presidency, arguing that Mr Maduro's 2018 re-election was illegitimate.

Mr Guaido is recognised as Venezuela's legitimate head of state by the United States, Europe and others, while Mr Maduro is backed by countries including Russia, China, and Cuba.

The fault lines are increasingly putting Venezuela at the heart of global geopolitical tensions.

US President Donald Trump's administration has imposed sanctions on the Maduro government and refused to rule out military intervention, although it says it prefers a peaceful transition.

"Military action is possible. If that's what's required, that's what the United States will do," US Secretary of State Mike Pompeo told Fox Business Network.

The Pentagon appeared to downplay any active preparations to directly intervene in Venezuela, but acknowledged detailed contingency planning.

In turn, the United States has accused Russia of interfering in the South American country, an ally of Russia since the time of Mr Maduro's predecessor and mentor, the late President Hugo Chavez.

Mr Pompeo said yesterday that Mr Maduro had recently been prepared to leave Venezuela but changed his plan after Russia intervened.

A spokeswoman for Russia's foreign ministry denied that.

"This is our hemisphere," he told reporters outside the White House. "It's not where the Russians ought to be interfering. This is a mistake on their part. It's not going to lead to an improvement of relations." 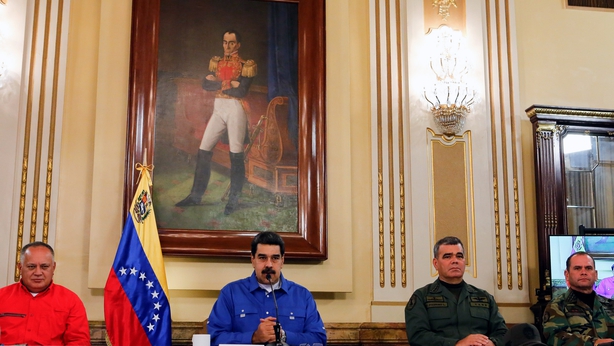 Venezuelan living standards have declined even further in the first several months of the year, with blackouts and water shortages adding to hyperinflation and chronic shortages of food and medicine that have prompted millions to emigrate.

"Tomorrow, the first of May, we will have a large, millions-strong march of the working class," Mr Maduro said in a television address yesterday.

"We have been confronting different types of aggression and attempted coups never before seen in our history."