President Michael D Higgins has sent "the sympathies and solidarity of the people of Ireland' to the families of victims of a series of deadly bomb attacks in Sri Lanka.

A string of blasts ripped through churches and high-end hotels as worshippers attended Easter services in Sri Lanka this morning, killing at least 156 people.

The nature of the blasts was not immediately clear and there were no immediate claims of responsibility.

In a statement, Mr Higgins said "the right to the freedom of worship is a fundamental right."

We need your consent to load this rte-player contentWe use rte-player to manage extra content that can set cookies on your device and collect data about your activity. Please review their details and accept them to load the content.Manage Preferences
Tánaiste Simon Coveney also expressed his sympathies, saying there can be no justification for the attacks.

"I am shocked at the appalling attacks on innocent civilians this morning in Sri Lanka," Mr Coveney said.

"No political or other cause can justify or excuse the bombing of people at worship or simply going about their daily lives."

He added that the Sri Lankan attacks and a recent attack on a mosque in New Zealand are "a challenge to us all" to protect everyone's freedom of religion and belief.

"Places of worship must be places of peace, free from fear," he added. 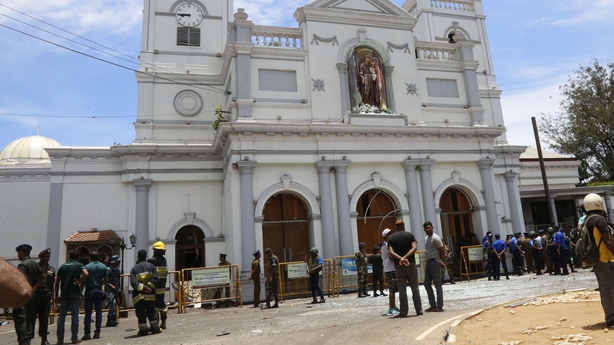 Pope Francis expressed his sadness at the deadly bomb attacks and said he stood with the victims of "such cruel violence."

"I learned with sadness the news of the attacks which today, Easter Sunday, brought mourning and pain," Francis said in his traditional Easter address at the Vatican.

"I want to express my affectionate closeness with the Christian community, attacked while it was at prayer, and to all the victims of such cruel violence."

The Catholic Church in Jerusalem has voiced support for Sri Lanka's Christians and also condemned the attacks.

A statement said the blasts were particularly sad as they "came while Christians celebrate Easter."

"We pray for the souls of the victims and ask for speedy recovery of the injured, and ask God to inspire the terrorists to repent of their killing and intimidation," the statement said.

"We also express our solidarity with Sri Lanka and all its inhabitants in their various religious and ethnic backgrounds."

Only around 6% of mainly Buddhist Sri Lanka is Catholic.

The Church of Ireland Archbishop of Dublin has said the blasts remind us "starkly and tragically" of the persecution of Christian minorities.

In a statement, Reverend Dr Michael Jackson said: "These Christians are our sisters and brothers. We stand in solidarity with them and they with us. Together we are one family of the resurrection."

"There is no tomorrow, no Bank Holiday Monday, for those killed in the multiple bomb blasts in Sri Lanka," he said.

"There is nothing but devastation and fear and injury for these people, these communities and for Sri Lankan society."

A minute's silence was held at Easter Rising commemorations in Dublin's Glasnevin Cemetery this morning.

A minute’s silence is being held at Glasnevin Cemetery in Dublin in memory of Journalist Lyra McKee in Derry and all those killed in the attacks in Sri Lanka @rtepolitics @rtenews pic.twitter.com/GMjjXIWet9

A month after dozens of Muslims were killed in a shooting at two mosques in Christchurch, New Zealand Prime Minister Jacinda Ardern described the attack as "devastating".

"New Zealand condemns all acts of terrorism, and our resolve has only been strengthened by the attack on our soil on the 15th of March. To see an attack in Sri Lanka while people were in churches and at hotels is devastating.

"New Zealand rejects all forms of extremism and stands for freedom of religion and the right to worship safely. Collectively we must find the will and the answers to end such violence."

The acts of violence against churches and hotels in Sri Lanka are truly appalling, and my deepest sympathies go out to all of those affected at this tragic time.

We must stand together to make sure that no one should ever have to practise their faith in fear.

She said: "The acts of violence against churches and hotels in Sri Lanka are truly appalling, and my deepest sympathies go out to all of those affected at this tragic time.

"We must stand together to make sure that no one should ever have to practise their faith in fear."

Australia's Prime Minister Scott Morrison said the country was thinking of those killed in a "horrific terrorist attack".

"To the beautiful people of Sri Lanka, Australia sends its heartfelt sympathies and our prayers and our support - and our offer to do whatever we can to support you in this terrible time of need," he said in a statement.

"At this time as Easter Sunday draws to a conclusion here in Australia, our heart goes out to those Christians and all of those other innocents who have been slaughtered today in this horrific terrorist attack."

It was with horror and sadness that I heard of the bombings in #SriLanka costing the lives of so many people. I offer my heartfelt condolences to the families of the victims who had gathered to worship peacefully or come to visit this beautiful country. We stand ready to support.

EU commission chief Jean-Claude Juncker expressed his "horror and sadness" at the deadly string of attacks.

"It was with horror and sadness that I heard of the bombings in Sri Lanka costing the lives of so many people," Mr Juncker said on Twitter, adding that the European Union stood ready to help.

"I offer my heartfelt condolences to the families of the victims who had gathered to worship peacefully or come to visit this beautiful country," he added.

EU foreign policy chief Federica Mogherini said the attacks marked "a truly sad day for the country and for the world".