The 1916 Easter Rising has been commemorated around the country today with a military ceremony on O'Connell Street in Dublin.

The commemoration was held outside the GPO in Dublin - the Headquarters of the rebels.

President Michael D Higgins laid a wreath at the GPO to mark the 103rd anniversary of the rebellion. 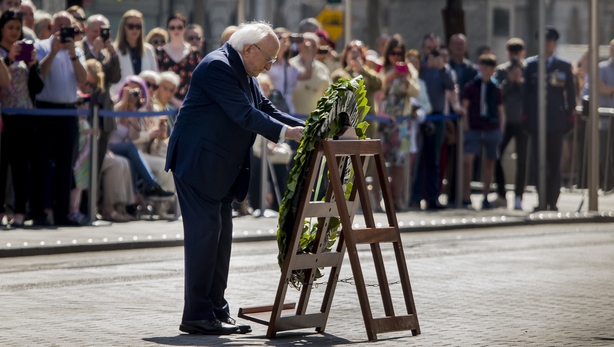 The Taoiseach Leo Varadkar and the Minister with Responsibility for Defence, Paul Kehoe also attended the event, which involved prayers of remembrance and a reading of the Proclamation.

A minute's silence was held to honour those who fought and lost their lives in the rebellion, which reduced parts of the capital to ruins and fired the country's flame of independence.

Hundreds of people including relatives of those who died in 1916 lined the streets of O'Connell Street in the sunshine to mark the anniversary.

With the national flag on top of the GPO lowered, the crowd applauded after a reenactment of Padraig Pearse's reading of the proclamation by Captain Paul Conlon, with an Air Corps fly past bringing the event to a close. 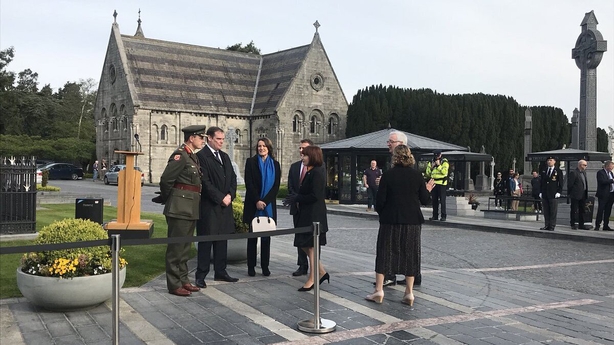 At an earlier ceremony at Glasnevin Cemetary, wreaths had been laid at the graves of Edward Hollywood, the man who delivered the first Irish tricolour flag to Ireland from France, and Peader Kearney, the composer of Ireland's national anthem.

The Minister for Culture, Heritage and Gaeltacht Josepha Madigan was speaking during the ceremony to honour those who died during the Easter Rising in 1916.

She also condemned the recent murder of journalist Lyra McKee in Derry.

Ms Madigan said there can be no justification for violence in Ireland or in Northern Ireland.

She said the people who carried out this murder represent nobody on this island.

A minute’s silence was held in honour of Ms McKee, as well those killed in the attacks in Sri Lanka this morning.

A minute’s silence is being held at Glasnevin Cemetery in Dublin in memory of Journalist Lyra McKee in Derry and all those killed in the attacks in Sri Lanka @rtepolitics @rtenews pic.twitter.com/GMjjXIWet9

Separately, the National Union of Journalists says it will hold a vigil at the entrance to the Garden of Remembrance, Parnell Square, on Tuesday evening at 6pm, the eve of the funeral of the murdered journalist.

The funeral of Lyra McKee will take place in St Anne's Cathedral in Belfast at 1pm on Wednesday, followed by burial in Carnmoney cemetery. Members of the NUJ will form a guard of honour at the funeral.