Eight people have been arrested in connection with a string of deadly blasts that have killed more than 200 people in Sri Lanka, the country's prime minister said.

Prime Minister Ranil Wickremesinghe added that "so far the names that have come up are local," but that investigators would look into whether the attackers had any "overseas links".

He also acknowledged that "information was there" about possible attacks.

"While this goes on, we must also look into why adequate precautions were not taken," he said.

Mr Wickremesinghe reiterated the government's first priority would be to "apprehend the terrorists."

"First and foremost we have to ensure that terrorism does not lift its head in Sri Lanka."

In the aftermath of the worst act of violence since the end of Sri Lanka's civil war a decade ago, the government decided to impose an immediate and indefinite curfew across the entire country of 21 million people.

At least two of the attacks were confirmed as being carried out by suicide bombers, according to police sources and a hotel official.

An AFP photographer at the scene at St Anthony's saw bodies lying on the floor, some draped with scarves and clothes.

Much of the church roof was blown out in the explosion, with roof tiles, glass and splintered wood littering the floor along with pools of blood. 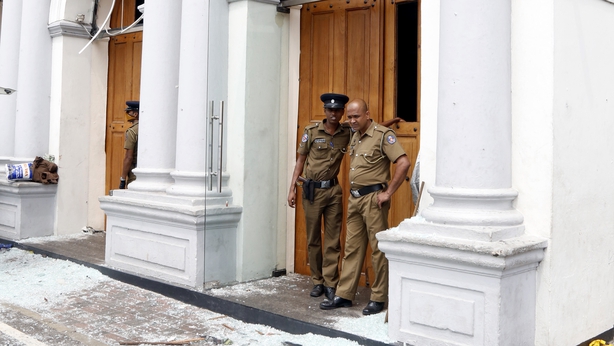 At the Shangri-La hotel, an AFP photographer saw extensive damage on the second floor restaurant, with windows blown out and electrical wires hanging from the ceiling.

The injured flooded into local hospitals, where officials reported hundreds of wounded were being admitted.

There were no immediate claims of responsibility for the blasts, but documents seen by AFP show that Sri Lanka's police chief Pujuth Jayasundara issued an intelligence alert to top officers ten days ago, warning that suicide bombers planned to hit "prominent churches". "A foreign intelligence agency has reported that the NTJ (National Thowheeth Jama'ath) is planning to carry out suicide attacks targeting prominent churches as well as the Indian high commission in Colombo," the alert said.

The NTJ is a radical Muslim group in Sri Lanka that was linked last year to the vandalisation of Buddhist statues.

The government ordered a nationwide curfew to start immediately and last "until further notice", and a "temporary" social media ban was imposed "in order to prevent incorrect and wrong information being spread". 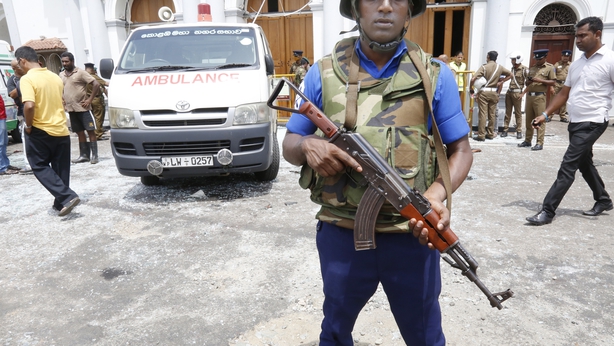 The first blast was reported at St Anthony's, followed by a second deadly explosion at St Sebastian's, a church in the town of Negombo, north of the capital.

"A bomb attack to our church, please come and help if your family members are there," read a post in English on the church's Facebook page.

Soon after, police confirmed that a third church in the east-coast town of Batticaloa had been hit, along with three high-end hotels in the capital - the Cinnamon Grand, the Shangri-La and the Kingsbury.

An official at the Cinnamon Grand, near the prime minister's official residence in Colombo, said a suicide bomber blew himself up at people at the hotel's restaurant.

"He came up to the top of the queue and set off the blast," he told AFP.

A police official told AFP that the death toll after the first six blasts was at least 156, including 35 foreigners.

Later in the afternoon, two died in a strike at a hotel in the south of Colombo, while a police source said a suicide bomber hit the suburb of Orugodawatta in the north of the capital, killing three and bringing the overall toll to at least 161.

President Maithripala Sirisena said in an address that he was shocked by the explosions and appealed for calm.

On Twitter, Mr Wickremesinghe wrote: "I strongly condemn the cowardly attacks on our people today.

"I call upon all Sri Lankans during this tragic time to remain united and strong. Please avoid propagating unverified reports and speculation. The government is taking immediate steps to contain this situation." 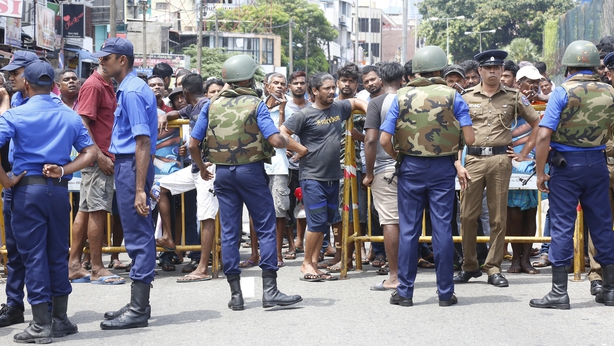 The Archbishop of Colombo, Malcolm Ranjith, described those behind the attacks as "animals" and called on the authorities to "punish them mercilessly".

US President Donald Trump tweeted his condolences on the "horrible terrorist attacks", and Pope Francis in his Easter address at the Vatican spoke of his "affectionate closeness with the Christian community, attacked while it was at prayer".

Sri Lanka's Minister of Economic Reforms and Public Distribution, Harsha de Silva, said he had been to two of the attacked hotels and was at the scene at St Anthony's, where he described "horrible scenes".

"I saw many body parts strewn all over," he tweeted, adding that there were "many casualties including foreigners". Embassies in Colombo warned their citizens to shelter in place, and Sri Lankan Airlines told customers to arrive at the airport four hours ahead of flights because of ramped-up security in the wake of the attacks.

Only around 6% of mainly Buddhist Sri Lanka is Catholic, but the religion is seen as a unifying force because it includes people from both the Tamil and majority Sinhalese ethnic groups.

There have been no attacks in Sri Lanka linked to foreign Islamist groups, despite local media reports that a 37-year-old Sri Lankan was killed in Syria in 2016 while fighting for the Islamic State group.

In January, Sri Lankan police seized a haul of explosives and detonators stashed near a wildlife sanctuary following the arrest of four men from a newly formed radical Muslim group 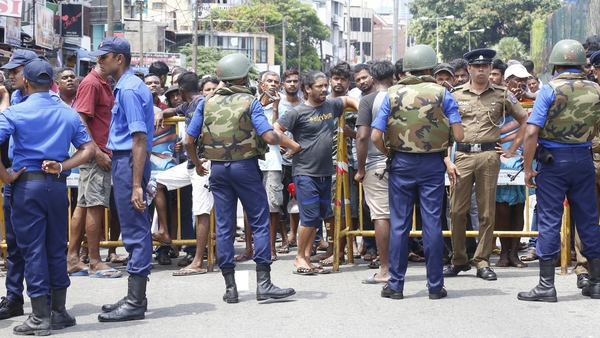