The starvation in Yemen has left children too weak to cry.

Ghazi Saleh, who is ten years old, can barely breathe and weighs only 8kg.

He is in Al-Mudhaf Hospital in the southwestern Yemeni city of Taez receiving treatment for severe malnutrition.

Skin and bones, Ghazi is just one of 11.3 million children in need in Yemen as the war rages on.

Four hundred thousand children under the age of five suffer from severe acute malnutrition and are fighting to survive, according to UNICEF.

The number is the equivalent to every child in Ireland under the age of four.

Some children have become too weak to swallow and have to be injected with nutrients.

Chief of Communications for UNICEF in the Middle East & North Africa, Juliette Touma, told RTÉ News that the situation in Yemen is like 'hell'.

UNICEF also said just half of Yemen's health facilities are functional, and those that are left face severe shortages in medicine, equipment and staff.

As Ghazi continues to battle against the hunger, many have lost their fight.

It is estimated that 85,000 children, all under-five, may have died from starvation in Yemen since 2015.

The figures, from Save the Children, are a conservative estimate based on data from the United Nations.

Over 14 million Yemenis are at risk of famine and more than half are children, according to the UN.

The world turned its attention to Yemen last month, when the New York Times gave an insight into the scale of the devastation.

The newspaper gave an account of how the war is affecting communities, in particular children, and showed a striking image of a starving seven-year-old girl, Amal Hussain.

For those who are not dying of hunger, UNICEF said almost 3,000 boys have been recruited into fighting.

Education of children is now rare, and makeshift schools are emerging around the country.

More than 2,500 schools have been damaged or destroyed.

One in five schools in Yemen can no longer be used and teachers have not been paid in years.

The war is rooted in the lack of political stability following the Arab Spring.

However, President Hadi found it difficult to make changes to a range of problems including corruption and threatening political movements.

The Houthi movement took advantage of Mr Hadi's disadvantages and gained power in the northern Saada province - eventually forcing the president to flee.

As the Houthi-controlled ground grew, Saudi Arabia and other states began an air campaign, worried that the movement was being backed by Iran.

The fighting has continued since 2016 and has resulted in different factions emerging and getting involved.

Millions of people have been left in need of aid.

The latest available figure from the UN for the death toll from the war was in 2016, when it stood at more than 10,000.

The UN is hoping for peace talks to take place in Sweden by the end of this year.

For Ghazi, and many more children suffering, they hope they can look forward to peace and a future in Yemen. 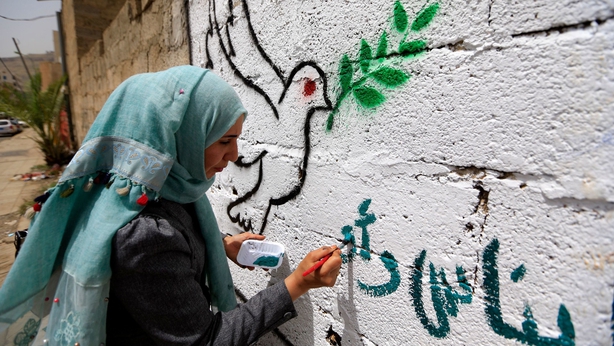