British volunteer divers have "spearheaded" the discovery of 12 boys and their football coach missing for nine days in flooded caves in Thailand, however rescuers now face the daunting task of bringing them to safety.

Rick Stanton and John Volanthen are believed to have been the first rescuers to reach the group who disappeared in the Luang Nang Non Cave, Chiang Rai province, on 23 June.

British media reported that Mr Stanton is a firefighter in his mid 50s from Coventry who has more than 35 years' experience of cave-diving.

The Guardian reported that Mr Volanthen is a computer engineer from Bristol who runs marathons in his spare time.

They are regarded as world experts in their field.

There were scenes of elation yesterday as parents and relatives who had gathered at the cave site learned the group had been found in a stable medical condition.

However, rescuers still face the challenge of safely helping the boys and their coach to safety through nearly a mile of tunnels, large portions of which are underwater.

Thai authorities have said that the military will make the final decision on how the boys are rescued, with one option coaching them to swim through the passages using scuba equipment.

Another would be waiting for the water level to drop, which some officials are reported to fear could take months.

BCRC vice chairman Bill Whitehouse described how celebrations that the group had been found quickly turned to the challenge ahead.

"It was euphoria for a moment and then you draw back and think 'what do we do' - it's not going to be easy to get 13 people out of a flooded cave," he said.

"That's still a lot of diving and it's possible it will need a lot of equipment. The questions is how much time until the water goes up again." 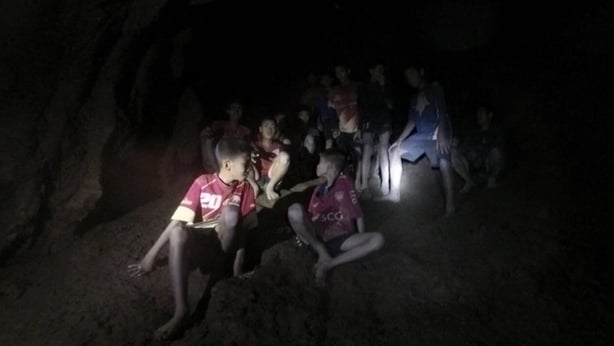 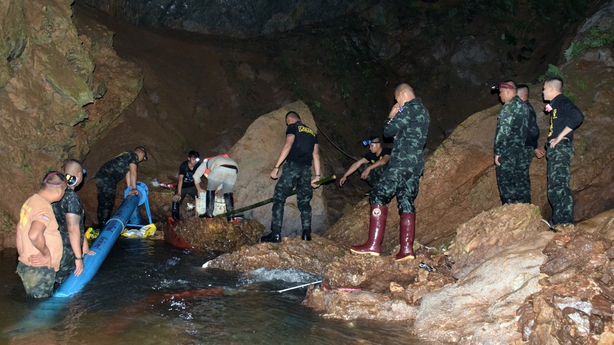 Mr Whitehouse said the chances are that the youngsters and their coach will be able to "sit it out" if the water levels rise again.

Since their discovery they have been given a brief medical assessment and supplied with high-protein liquid food, painkillers and antibiotics as a precaution.

Underwater operations resumed after the treacherous conditions began to improve on Sunday, with the forward search party setting off midday local time yesterday.

"The British divers Rick and John were at the spearhead of that," Mr Whitehouse said.

"They were pushing ahead with the other divers following on behind, creating dumps of air bottles.

"We were hoping that today we would know one way or the other (if the group would be found).

"They managed to dive the last section and get through into the chamber where the missing party were on a ledge above the water."

Despite the key role played by the British team in the remarkable events, Mr Whitehouse highlighted that they were part of a major effort overall.

"It was a huge operation of which our divers were only a relatively small part, but it happened to be a breakthrough," he said.

"It might have been down to the pumping of water or finding another way in."