Footage has been released of an emaciated and bedraggled Thai youth football team crammed onto a wedge of dry ground surrounded by water deep inside a cave where they have been trapped for nine days.

The group, mostly seated and with baggy football shirts pulled over their knees, asked for food and to leave the cave immediately, according to the video shared on the official Facebook page of the Thai Navy SEALS.

In the video a diver, speaking with a British accent, urges the group to stay calm and says "many, many people are coming... we are the first".

The group appeared exhausted, thin, sensitive to the light but lucid, with some speaking faltering English to try to communicate with the unidentified diver.

A voice confirms all 13 people who went missing last Saturday are on the slope of land.

One child asks "what day?" and another says "we are hungry.. shall we go outside?"

A child in the foreground appears to bow in gratitude and says "thank you" as his voice falters.

This afternoon Chiang Rai governor Narongsak Osotanakorn told reporters that rescue teams had discovered the 12 boys and their assistant soccer coach in the cave with "signs of life".

Earlier, rescuers scrambled to clear a constricted passageway for divers deep inside the flooded cave complex as the search for the team entered a ninth day.

The boys, aged between 11 and 16, and their 25-year-old coach disappeared on 23 June during an outing to the Tham Luang cave, which runs for 10km beneath the mountains in northern Chiang Rai province.

Aside from belongings left at the mouth of the cave and handprints on cave walls, there had been no trace of them until this afternoon.

Read more:
Thai cave rescue: How it unfolded
What the search teams faced

Relatives of the boys, who have been at a shelter near the cave hoping for a breakthrough, were seen cheering, smiling and receiving calls after being given the news.

Rescuers shook hands and congratulated each other as occasional cheers broke out.

It remains unclear whether any of the group are injured or in need of medical attention, but they have been given energy gels to sustain them while a plan is worked out to bring them to safety.

As the days wore on with the group missing, distraught family members had placed fruit, desserts, sugary drinks and sweets on mats near the cave as an offering to the spirits which some people believe protect the cave and the forest.

Rescuers had been working on Monday to clear a constricted passageway for divers deep inside the flooded complex in a search operation that has been hampered by heavy rain. 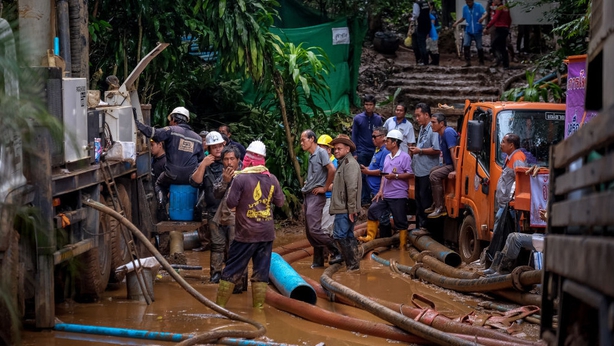 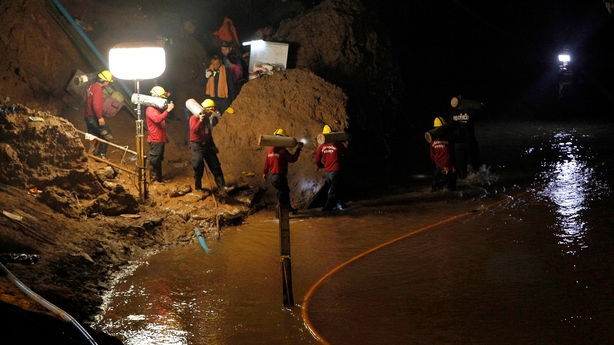 Divers from Thailand's elite navy SEAL unit had been focusing on an elevated mound inside the cave which cavers have named "Pattaya Beach", which could have provided the boys with a refuge when rains flooded the cave.

Captain Jessica Tait from the US Air Force's rescue support team said there were "lots of challenges" throughout the search but that the effort had brought the country together.

"But you know what I saw, I saw Thailand coming together,"she added.

The next challenge will be getting the group out of the cave, which some have dubbed a "labyrinth".

Rescuers had discussed waiting until water levels subsided to get the boys out. Other options included teaching the group to use diving gear to navigate the flooded cave.

Medical teams were seen preparing first aid kits after news of the group's discovery broke outside the cave's entrance.

Mr Narongsak said medical teams had been sent inside the cave and it would take them around four hours to assess the group's health and how fit they are before coming up with a strategy to get them out.

The boys have been provided with energy gel to eat, the Thai Navy SEAL unit said on its official Facebook page.

"Power gel and sustenance equipment has been brought ... to the team ... and we've sent people to keep them company until the transport plan can begin," it said.

The search for the boys gripped the nation, with news bulletins dominated by updates on progress made by a mammoth rescue effort involving more than 1,000 personnel.

Divers from the Thai Navy SEAL unit were at the forefront of the search, supported by international rescue teams from the US, Britain and Japan and elsewhere.