A massive international operation to search for 12 boys and their football coach in a flooded Thai cave made agonising progress as rescuers battled muddy torrents in almost total darkness, in a race-against-time to find the lost children.

Bad weather hampered the rescue effort for the youngsters, aged between 11 and 16, and their 25-year-old coach through the snaking Tham Luang cave - one of Thailand's longest and toughest to explore.

Rains finally eased over the weekend and water pumps working around the clock helped to stem the floods.

But several tunnels leading to where the boys were believed to be were still submerged in murky waters this afternoon as the search entered its ninth day.

Here's what we know about how the boys got stuck, what rescuers were up against and how the team can be removed from the flooded cave.

How did they get trapped so quickly?

It is not known why the team ventured into the cave, but they had been there before - some of the boys knew it well.

They are believed to have walked several kilometres into the winding network of passageways to an elevated, airy sandbank called 'Pattaya Beach'.

That means they would have had to pass through at least one narrow slit in the rock now submerged in muddy water.

Then the heavy rains started and water likely rushed in through the cave's main entrance while simultaneously seeping through porous limestone walls.

"It's like filling your bathtub with 15 different hoses at the same time, and then you have a single drain... and the drain can only do so much," Josh Morris, founder of Chiang Mai Rock Climbing Adventures, who helped the rescue effort, told AFP. 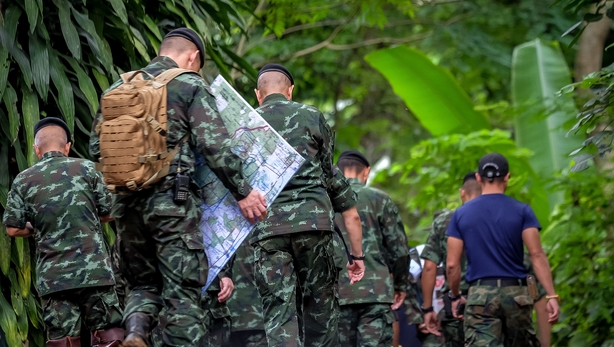 The cave is one of Thailand's longest - it stretches 10km underground - and also one of the most notoriously difficult to navigate.

A sign outside the cave warns visitors not to enter in the rainy months from July to November.

Its up-and-down tunnels provide plenty of low points for floodwaters to pool, and its claustrophobic passageways are almost impossible to find once submerged.

What were rescuers up against?

Mr Morris compared the tunnels to an "obstacle course", while Thai television showed archive footage of jagged crannies that lead to 'Pattaya Beach' - hard going in water and with bulky oxygen tanks for the divers.

There are few openings to the cave and few light sources, so without head torches conditions inside are pitch black.

Thai Navy SEAL divers reached several kilometers inside the cave, but it took them days and they were forced back at several points by onrushing waters.

They risked being pinned to rocks by fast-moving torrents and every move forward needed to be calculated carefully.

They were also battling poor visibility: the murky waters have been compared to swimming in a cold cafe latte.

A base camp was set up 3km inside the cave over the weekend - stocked with food, medicine, water and hundreds of oxygen tanks - allowing the divers to stay in the depths for longer stretches. 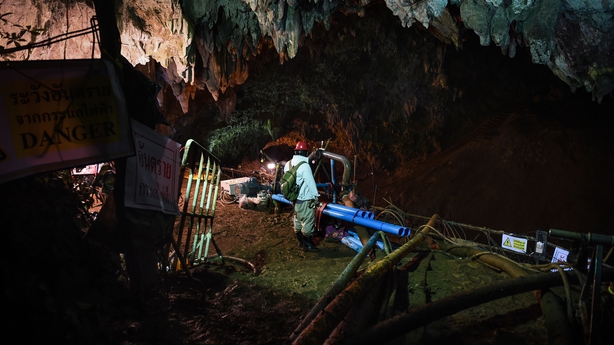 How long will it take to get the boys out?

Now the boys have been found, the precarious task of getting them out has become an urgent - and complicated - task.

There are several options, though none of them easy.

They may have to dive through flooded tunnels, retracing divers' routes to reach them.

Or they could be lifted out through chimneys the rescuers have drilled - if those chimneys connect to the area where the boys are found.

Waiting for flooding to subside is another option that could allow the boys to get out on foot.

All of the choices are seriously complicated by the physical condition of the team and their immediate medical needs after days underground with little food.

"Cave rescue is laborious, it takes forever, even when you find people that's the first step then kind of the 'real' rescue starts after that," Mr Morris said.

"My assumption is that if they do find the boys it will probably take a few weeks after that," he said earlier.