The European Union has called for an immediate ceasefire and aid deliveries in the rebel-held Syrian enclave of Eastern Ghouta after more than 400 civilians were killed there.

"The European Union is running out of words to describe the horror being experienced by the people of Eastern Ghouta", she added.

A new wave of bombs struck the area today, witnesses said, ahead of a United Nations Security Council vote to demand a 30-day ceasefire across the country.

The vote was due to take place this afternoon but the UN Security Council delayed the vote until tomorrow afternoon.

For a sixth straight day, warplanes have pounded the densely populated agricultural pocket east of the capital, the last rebel bastion near Damascus.

The dead include at least 98 children.

Medical charities say jets have hit more than a dozen hospitals, making it near impossible to treat the wounded.

The Britain-based observatory said government warplanes and artillery hit Douma, Zamalka, and other towns across the enclave in the early hours of this morning.

There was no immediate comment from the Syrian military.

The UN Security Council has been considering a resolution, which Kuwait and Sweden drafted, demanding "a cessation of hostilities throughout Syria for all military operations" for 30 days to allow aid deliveries and medical evacuations. 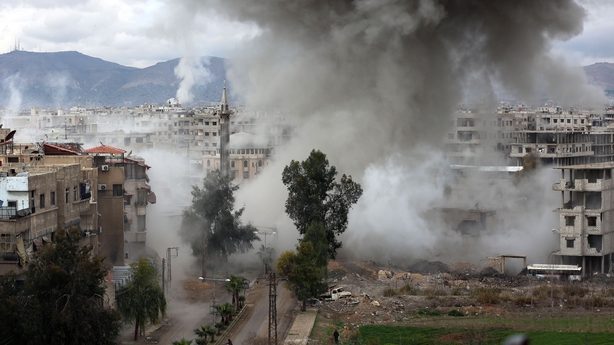 The resolution does not cover the groups Islamic State, al-Qaeda and the Nusra Front, which Russia and Syria say they have targeted in Eastern Ghouta.

The French government has said President Emmanuel Macron and German Chancellor Angela Merkel have written to Russian President Vladimir Putin urging him to back the resolution.

Several previous ceasefire attempts in Syria have quickly unravelled throughout the multi-sided conflict, which has killed hundreds of thousands and displaced 11 million people.

A witness in Douma said that today’s early morning bombing was the most intense so far.

Another resident, in the town of Hamouriyeh, said the assault had continued "like the other days".

"Whenever the bombing stops for some moments, the civil defence vehicles go out to the targeted places. They work to remove the debris from the road," said the witness.

The bombing of Eastern Ghouta since Sunday night has been among the fiercest of the war, which is now entering its eighth year.

Tánaiste and Minister for Foreign Affairs Simon Coveney has described what is happening in Eastern Ghouta as "shocking", and said he hopes a resolution will be passed.

Speaking to RTÉ News in Washington, he said: "We know that hundreds have been killed, many women and children.

"When you hear the Secretary General of the UN describing a place as hell on earth and appealing to countries to respond accordingly, you should not take that lightly as the UN Security Council deals with all sorts of difficult cases."