Pro-government forces have pounded the rebel-held Syrian district of eastern Ghouta district for a second day, with the death toll from the attacks reportedly reaching 250.

The Britain-based Syrian Observatory for Human Rights claimed it was the highest 48-hour death toll in the Syria conflict since a 2013 chemical attack in the area.

Eastern Ghouta is the last major rebel bastion located near the capital Damascus.

The wave of air strikes, rocket fire and shelling has sparked international condemnation.

France, a permanent member of the UN Security Council, described the bombardment as a serious violation of international humanitarian law.

The US said it was "deeply concerned" about the attacks, criticising what it called the "siege and starve tactics" of the regime of Syrian President Bashar al-Assad.

There was no immediate comment from the Syrian military, while the Syrian government has maintained that only targets militants. 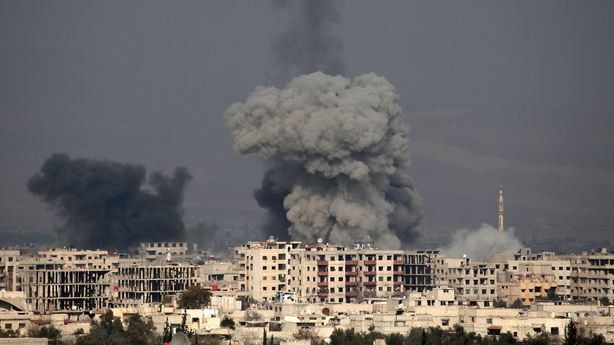 Recent violence in the besieged suburb is part of a wider surge in fighting on several fronts as President Assad's military pushes to end the seven-year rebellion.

The observatory said the bombardment had killed more than 106 adults and children in eastern Ghouta today alone.

He said intentional attacks on medical facilities "may amount to war crimes".

In Geneva, the UN children's agency issued a blank statement in which it expressed outrage at the casualties among the enclave's children, saying it had run out of words.

Those killed since the escalation began on Sunday include 58 children. Another 1,200 people have been injured in the bombardment. 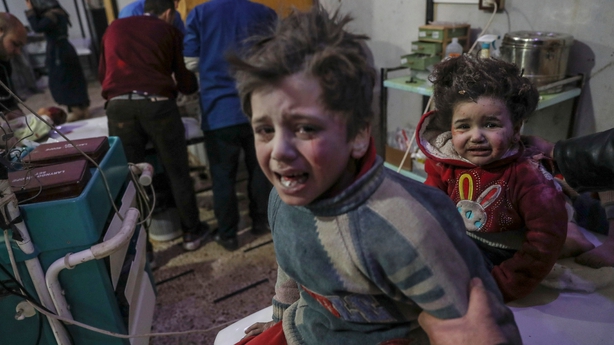 Rescuers said the air raids created "a state of terror" among residents in eastern Ghouta, where the UN says nearly 400,000 people live.

The pocket of satellite towns and farms has been under government siege since 2013.

The army retaliated and pounded militant targets, according to the state news agency SANA.

It said in a letter of complaint to the UN that some Western officials were denying the government's right to defend itself. 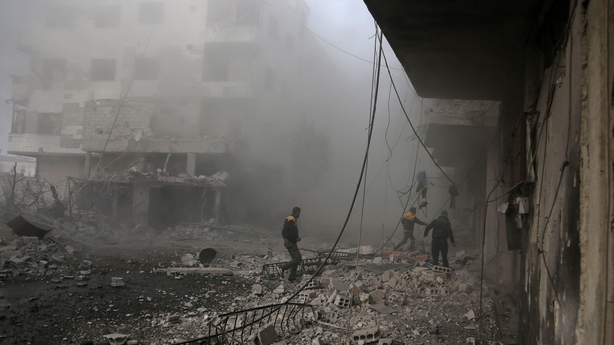 "The warplanes are not leaving the sky at all," said Siraj Mahmoud, a civil defence spokesman in Ghouta.

He said that government forces bombed houses, schools and medical facilities, and that rescuers had found more than 100 people dead yesterday.

Mr Assad's most powerful backer, Russia, has been pushing its own diplomatic track, which resulted in establishing several "de-escalation zones" in rebel territory last year.

Fighting has raged on in eastern Ghouta even though it falls under the ceasefire plans that Moscow brokered with the help of Turkey and Iran.

The truces do not cover a former al Qaeda affiliate, which has a small presence in the besieged enclave.

Residents and aid workers say the "de-escalation" deals have brought no relief. Food, fuel and medicine have dwindled.

Russia did not comment on the renewed bombing in eastern Ghouta.

UN Syria envoy Staffan de Mistura warned that the escalating battle in Ghouta could turn into a repeat of the bloody fight for Aleppo, over which the Syrian government regained full control in late 2016 after years of fighting. 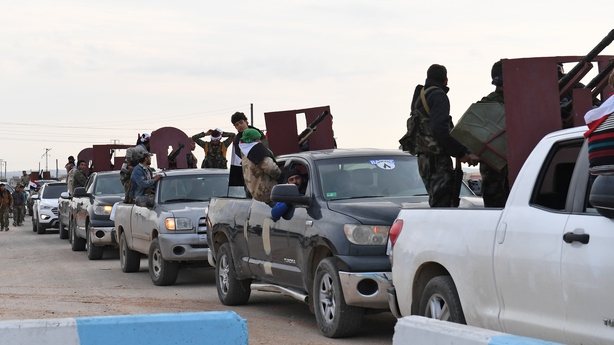 Pro-Syrian government forces entered Syria's northwestern Afrin region to help a Kurdish militia there fend off a Turkish assault, raising the prospect of a wider escalation of the conflict.

Soon after the convoy of militia fighters - waving Syrian flags and brandishing weapons - entered Afrin, Syrian state media reported that Turkey had targeted them with shellfire.

Turkish President Tayyip Erdogan described the convoy as being made up of "terrorists" acting independently.

He said Turkish artillery fire had forced it to turn back, although the Kurdish militia denied this.

A commander in the pro-Assad military alliance told Reuters the forces had turned back after coming under fire, but then resumed their progress and were now in Afrin.

Syrian television had earlier shown the group of fighters passing through a checkpoint that bore the insignia of the Kurdish security force, some chanting "one Syria, one Syria", and driving further into Afrin.

Turkey's month-old offensive is aimed at driving the Kurdish YPG militia, which it sees as a big security threat on its border, from Afrin.

The YPG hailed the arrival of the pro-government forces, which included militias allied to Mr Assad but not the Syrian army itself, and said they were deploying along the front line facing the Turkish border.