Democrats in the US House of Representatives have begun an investigation into the decision by US Vice President Mike Pence to stay at the Trump International Golf Links and Hotel in Doonbeg, Co Clare.

Mr Pence spent two nights at the property this week during his visit to Ireland.

Democrats had accused the vice president of funneling US taxpayers' money into a Trump business.

They have now requested documents from the White House, the office of the vice president, the Secret Service and the Trump Organisation.

They want to establish how the decision was made and how much the stay at Trump Doonbeg cost.

The US House Oversight Committee and the US House Judiciary Committee have sent a series of letters requesting information on what they described as "multiple efforts by the President, Vice President, and other Trump Administration officials to spend taxpayer funds at properties owned by the President in potential violation of the constitution's emoluments clauses".

The letter points out that the hotel is 250km from Dublin, where Mr Pence's official meetings took place.

"The Committee does not believe that US taxpayer funds should be used to personally enrich President Trump, his family, and his companies," Congressman Cummings wrote.

According to letter: "The White House has not made public how much the Vice President’s trip cost the American taxpayer, or benefited the Trump Organisation, but based on previous investigations by the Government Accountability Office, the bill could be significant."

"President Trump stayed at his property in Ireland in June, which cost the American people an estimated $3.6 million," the letter stated.

The US President has said he was not involved in the decision by his vice president to stay at his Doonbeg hotel. 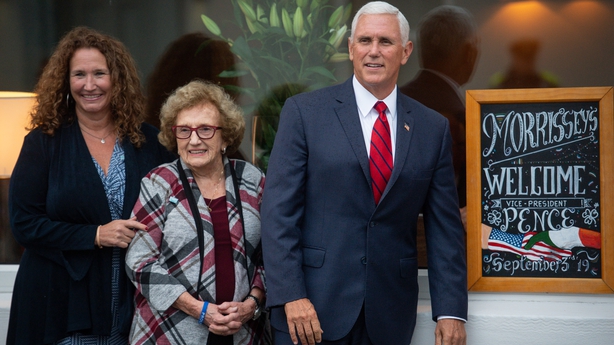 Mr Pence's Chief of Staff Marc Short had originally said that Mr Trump had suggested staying at the hotel but the US President said this was not the case.

"I had no involvement, other than it’s a great place," Mr Trump said.

He described Doonbeg as beautiful and wonderful. He also made reference to the fact that Mike Pence has family connections to the area.

"It wasn’t my idea for Mike to go there, Mike went there because his family is there," he told reporters.

"People like my product, what can I tell you. I can’t help it," Mr Trump said.

He denied that he suggested staying at his hotel adding: "We never spoke about it."

"It was important for me, before our original trip [was] planned, to at least spend one night in Doonbeg. And I understand political attacks by Democrats, but if you have a chance to get to Doonbeg, you'll find it's a fairly small place.

"The opportunity to stay at the Trump National in Doonbeg, to accommodate the unique footprint that comes with our security detail and other personnel, made it logical."

"We checked it with the State Department. They approved us staying there," he added.