US Democratic presidential candidate Joe Biden has accused Donald Trump of surrendering to the surging coronavirus pandemic, as he took his campaign to the Republican stronghold of Georgia one week before the election.

While the former vice president went on electoral offence, seeking to expand the campaign map and his state-by-state path to victory on 3 November, Mr Trump barnstormed the Midwest in a last-gasp bid to shore up states that voted for him in 2016 but which polls show are tilting Mr Biden's way.

And with the campaign narrowing down to its final days, Mr Biden tapped one of his top surrogates, former president Barack Obama, to deliver a closing argument for Democrats in Florida, a must-win swing state for Mr Trump if he is to earn reelection.

Mr Biden, buoyed by poll numbers that show him leading the incumbent, drilled in on Mr Trump's coronavirus response, reminding voters that Mr Trump's chief of staff Mark Meadows conceded at the weekend that "we're not going to control the pandemic."

Speaking in Warm Springs, Georgia, Mr Biden branded the response "a capitulation" by a White House that "never really tried" to halt a pandemic which has now killed more than 226,000 Americans.

Instead of acting as a wartime president to battle Covid-19 as he promised, Mr Trump "shrugged, he swaggered and he surrendered," Mr Biden said.

"I'm here to tell you: We can and we will control this virus," he added.

Mr Trump defeated Hillary Clinton by five points in Georgia in 2016, but polls have the him running neck and neck with Mr Biden there.

Georgia last voted for a Democrat for president nearly three decades ago - Bill Clinton in 1992 - but the Biden campaign has high hopes of flipping the state, and also winning its two US Senate seats which are up for grabs.

Mr Biden held a socially distanced drive-in rally later in Atlanta, Georgia's largest city, where he repeated some of the same attacks on Mr Trump but also urged voters to recognise how vital the state suddenly is to winning the White House. 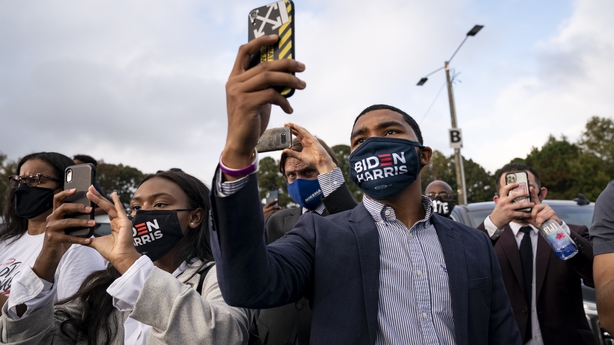 "We win Georgia, we win everything!" Mr Biden said, his voice rising. "These are the final days, so keep that sense of empowerment with you, that sense of optimism."

Mr Trump meanwhile maintained his hectic campaign pace, holding an open-air rally in Michigan followed by a similar one in Wisconsin and then Nebraska. Attendees did not practice social distancing, and many were maskless. 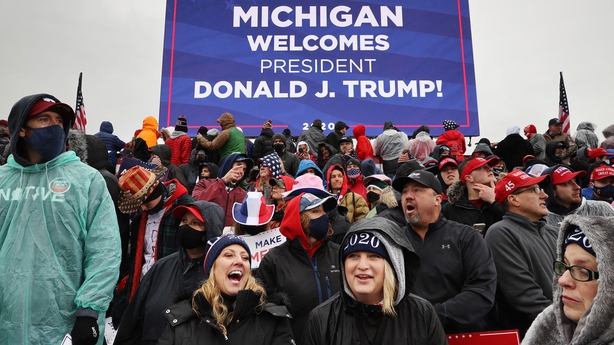 Michigan and Wisconsin are Midwestern battlegrounds which he won by razor thin margins four years ago, but Mr Trump insisted "we're leading almost everywhere" thanks to his frantic campaign schedule.

"I've got to say I'm working my ass off here!" he boomed in Lansing, Michigan, eliciting a huge cheer. 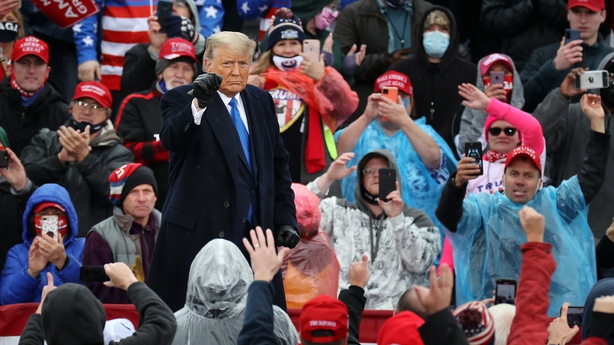 "This election is a choice between a Trump super-recovery or Biden depression," he said.

But with Covid-19 cases rising in several states and no agreement yet on a pandemic rescue package in Congress, US stocks mostly slid yesterday for a third straight session.

Later in Wisconsin, Mr Trump warned Americans that they should not "let this radical socialist group take over" with Mr Biden as president.

"We didn't come this far and fight this hard to surrender our country back to the corrupt Washington swamp," he said at his final rally of the day in Omaha, Nebraska.

Obama is drawing VERY small (tiny) numbers of people. Biden is drawing almost no one. We are drawing tens of thousands of people. You'll see that again today. The Great Red Wave is coming!!!

Election tracking website RealClearPolitics has Mr Biden up 7.4 points in an average of national polls - a slight drop from just days ago.

Mr Trump dismissed the polls in a tweet and accused the media of focusing on "Covid, Covid, Covid" to hurt his reelection chances.

With Mr Biden maintaining a more constrained campaign schedule instead of hosting what he called Mr Trump's "super-spreader" events, he dispatched Mr Obama to Florida, where the race is on a knife edge. 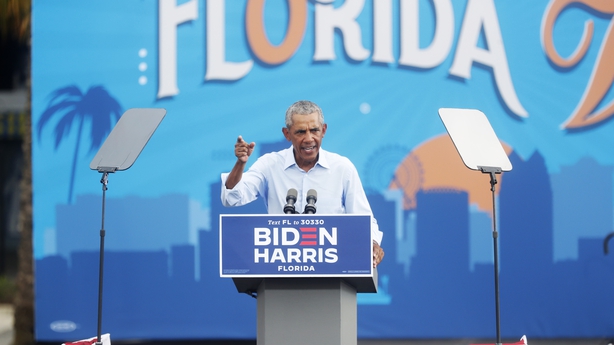 "One week until the most important election in our lifetimes," Mr Obama told a crowd at a drive-in rally in Orlando.

He delivered a searing indictment of Mr Trump, accusing him of incompetence, repeated lies, embracing dictators and ignoring the pandemic. 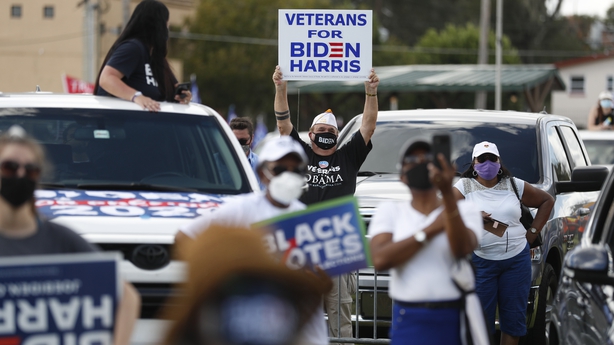 But he also offered a blunt assessment of how apathy in 2016 may have cost Democrats the election and he urged them to make a plan and vote early.

"We were complacent last time. Folks got a little lazy, folks took things for granted, and look what happened," Mr Obama said.

With Mr Trump in the Midwest, First Lady Melania Trump hit the hustings for the first time this year.

"Donald is a fighter," she told Trump supporters in Pennsylvania, before turning to her husband's rabid Twitter use.

"I do not always agree with the way he says things," she said, to some laughter. "But it is important to him that he speaks directly to the people he serves."