Photographs of Paul Quinn adorn the sitting room at the Quinn home in Cullyhanna in south Armagh. It's been 12 years since the 21-year-old left this house to pick up a friend from football training. He never returned.

The lorry driver was lured to his death and brutally murdered. He was found badly beaten in a shed near Castleblayney in Co Monaghan. Every bone in his body was broken. He was still alive when his girlfriend got to the shed. He died just hours later at Our Lady of Lourdes Hospital in Drogheda.

"We got to the hospital and we were told he was on life support. A nun came out to tell us the doctors were doing their best. But then the doctor came out and said, they left nothing to fix", explained Breege Quinn.

They say time is a healer but Breege Quinn said the pain of losing her son is unbearable and 12 years on, she misses him every day.

"I miss him every day of the week, he was full of life, he would just act the fool, he would make a phone-call to you and pretend he was someone else, he was so just full of life" she recalled. 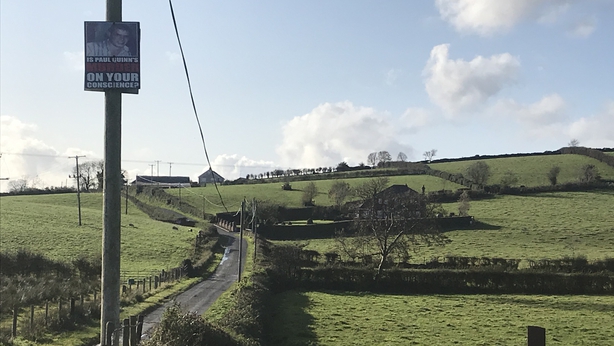 It's believed Paul Quinn was ambushed, beaten and killed on 20 October 2007 because he was involved in a row with the son of a senior member of the IRA.

At least nine men took part in the attack. Another 10 are suspected of acting as look-outs on the day of the murder.

"They had it all planned to a tee. I see these people every day. When they see me they look away" said Breege Quinn.

"I hope that those who murdered Paul can see him every night in their sleep and see themselves reigning down the blows on Paul, because you wouldn't do it to a dog", she said.

A month after his murder the Independent Monitoring Commission said it believed people associated with the IRA were involved in the murder of Paul Quinn.

However it said this was contrary to the policy and instructions of the IRA leadership and it believed the killing was the result of a local dispute.

Over the past 12 years detectives have made 23 arrests, 14 in the Republic and nine in Northern Ireland.

They've followed 1,900 lines of inquiry and taken over 700 statements but no one has ever been charged with the murder.

Searches have taken place. The van used to carry Paul's attackers is believed to have been buried but it's never been found.

The Garda Serious Crime Review Team, also known as the cold case unit, has reviewed the investigation and has made a number 100 recommendations which are now being assessed and considered.

Included in the recommendations are plans to re-interview people who were previously questioned over the killing.

DNA evidence will also be re-examined and further searches are expected for the van used to bring the gang from the shed where Paul Quinn was murdered.

"The investigation has been ongoing since 2007. The Cold Case unit had been asked to examine the case and give us their perspective on any recommendations that might assist us," he said.

They've made preliminary recommendations, over 100 in total.

"All those people have information that can assist the investigation and obviously we'll be reviewing all of that" said Superintendent Treanor.

On the 12th anniversary of Paul Quinn's murder, he once again appealed for information.

"The answer to this case lies in south Armagh, of that I have no doubt. What I will say to those people, they may have felt at that time that there were people who held a vice like grip of fear within that community - I'm saying to you, with the passage of time, tell us what exactly happened or what role you may have played" said Superintendent Treanor.

Paul Quinn would be 32 years old now. His mother Breege said it's never too late to come forward with information.

"You can lift the phone, you don't have to give your name, just give what you know, once it's truthful," she said.

She just wants justice for her son.

"I have hope, if I don't have hope I have nothing," she added.