The Fine Gael leader Leo Vardakar said that what has happened in the last 24 hours with the UK General Election demonstrates the risks associated with calling snap elections.

He said what happened is a lesson that we can learn from here in Ireland.

He was speaking as he arrived at a party event in Longford town tonight.

Speaking at the event, he said the fact that a new government will be formed with the support of the DUP does have risks at one level in that the government will only have a small majority and difficulties in getting things done.

On the positive side though he said the DUP may have influence on the British government and assist London to better understand the need to ensure there is no economic border on our island.

More on the UK election:

Earlier, Mr Varadkar said the election result suggests there is not a strong mandate for a hard Brexit.

Mr Varadkar, who is set to be elected as Taoiseach next week, said: "The results of the UK election indicate to me that there is no strong mandate to proceed with a hard Brexit, which represents an opportunity for Ireland."

He added: "The Irish Government is ready to participate in negotiations on Brexit and to restore power sharing in Northern Ireland.

"We must ensure that the Brexit talks are handled in a smooth and coherent manner to secure the best possible outcome for Ireland, for Europe and the UK."

Mr Varadkar also said the "early restoration" of the Northern Ireland Executive was a priority and that there is now a "strong opportunity for the parties in Northern Ireland to re-engage in discussions to form an Executive".

Minister for Foreign Affairs Charlie Flanagan has said he detects common ground in the deliberations of both the DUP and Sinn Féin in the aftermath of the election and wants to see the talks process up-and-running again and the dissolved assembly put back in place before the end of June.

Speaking in Ballinakill in Co Laois this afternoon, Mr Flanagan said he had spoken to Mr Varadkar about the situation but Mr Varadkar had not discussed the position of the foreign affairs minister in his government with him.

Meanwhile, Minister for Agriculture Michael Creed said the Government has to get on with the negotiation process in the aftermath of Brexit, regardless of whether Theresa May or anyone else is in charge at 10 Downing Street.

Speaking in Portlaoise this morning, Mr Creed said he did not see last night's election results leading in any way to a delay in the start date for negotiations between the UK government and the European Commission scheduled for 19 June.

He said Article 50 had already been triggered and there was a tight deadline in place.

The minister added it was not possible for anyone to say with any degree of certainty that last night's vote had made it likely there would be a hard Brexit for the UK from the EU.

Mr Creed said he was confident the new Taoiseach and his government would "hit the ground running next week" when it comes to dealing with the aftermath of the UK vote as a lot of preparatory work had already been done by the Government.

He said it was interesting that while the DUP would appear to be supporting the Conservatives in a new arrangement for government, the only party advocating a remain in Europe policy in the North had walked off the pitch and would not be heard in the Commons.

He said this was regrettable.

Martin critical of Sinn Féin in wake of UK vote 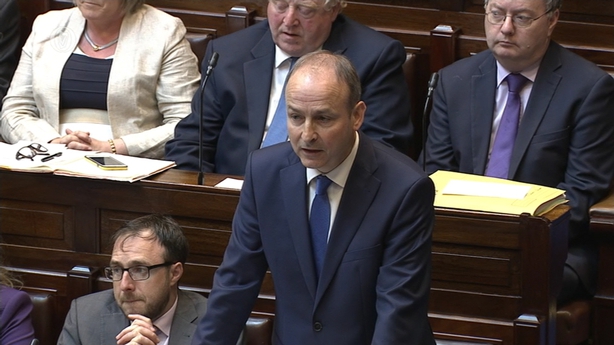 Mr Martin said it was "illogical and incomprehensible" that given the important issues facing the North regarding Brexit, that Sinn Féin would not participate as MPs in Westminster.

He also said he believes the outcome of the UK election should result in a softer Brexit.

Meanwhile, Sinn Féin Deputy Leader Mary Lou McDonald said "we are entering the end game of partition", which she said is "spurred on by the logic of Irish unity" in the wake of Brexit.

Speaking on RTÉ's News at One, Ms McDonald said it is a matter of great significance that no nationalist will take a seat at Westminster, but that the electorate in the North clearly understands Sinn Féin's abstentionist policy, and the "centre of gravity in (Irish) political life is in Ireland and in Belfast".

She said no nationalist or republican "imagines for a second that the DUP will defend their views or values".

Ms McDonald also said the DUP will have a hard task defending a hard Brexit.

"Arlene Foster and the DUP will have a hard task selling to her own people, the farmers of Fermanagh, anything that would rob them of 80% of their income stream," she said.

Richard Boyd Barrett said the results of the election were positive for Ireland and should strengthen the hand of those who want a softer Brexit.

He also described the showing of the Labour Party in the UK as an amazing success for Jeremy Corbyn.

Green Party Leader Eamon Ryan said a Conservative/DUP government "have no good cards to play in the upcoming Brexit negotiations".

He said the result showed Theresa May had lost her authority and described it as a victory for Jeremy Corbyn.

However, he warned "there is no upside for Ireland in what is happening today."

Mr Ryan also queried how Sinn Féin could continue to refuse to take their seats and allow events unfold without making any direct contribution.

The EU had planned to begin Brexit negotiations with Britain on 19 June. That timeline to begin talks now looks unlikely.

Meanwhile, the Director General of the British Irish Chamber of Commerce has said the hung parliament adds more uncertainty and more delay in the Brexit process.

Speaking on RTÉ’s Drivetime, John McGrane said Ireland might hope that the outcome will result in a "softer Brexit", but it is too early to know that.

He said even with DUP involvement in a political arrangement, there is much to be done to turn that into actual proposals that make sure the island of Ireland is not greviously damaged by Brexit.