Iarnród Éireann is urging people who are attending the papal mass in Phoenix Park on 26 August to book Intercity trains as soon as possible.

Iarnród Éireann said that a number of scheduled and extra trains are already sold out, and that tickets can be booked on its website or by calling 01-8366222.

The National Transport Authority has contracted the Northern Ireland transport company Translink to provide 100 double-decker buses to ferry pilgrims to and from the papal mass.

It comes as the Office of Public Works described the mass as the largest public gathering planned for Europe this year.

More stories: The Pope In Ireland

This morning, the World Meeting of Families unveiled the stage-cum-altar which was designed by Arcana's Johnny Donnelly, a former member of the band The Saw Doctors, and Tom Rohan.

Mr Donnelly said the design was partly inspired by the Claddagh ring in order to reflect Pope Francis' image of the family as a vine encompassing all its members.

He said the OPW had recently repainted the cross and that, thankfully, the colours of it and the stage matched. 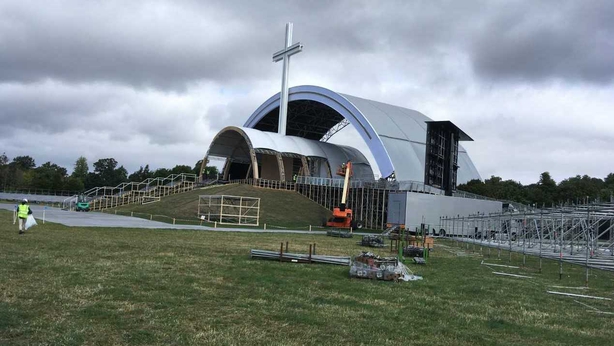 Mr Donnelly said the events of the day will run from 8am until 8pm.

Also attending the briefing was Garda Assistant Commissioner Pat Leahy, who confirmed that more than six entrances to Phoenix Park are being widened to cope with the large volume of pedestrian traffic at the mass.

He said he was confident that the exits in particular would be adequate and that studies had been completed to demonstrate the rate of flow of people entering and leaving the venue.

Mr Leahy also said that pilgrims should treat the mass in the same way that they would prepare for a pilgrimage to Croagh Patrick, and that they should wear clothes and shoes and bring sustenance to cope with a very long day.

The organisers of the World Meeting of Families have also appealed for people to leave no trace of rubbish behind them following the gathering at Phoenix Park, and said rubbish bags will be provided to everyone entering the venue.

Meanwhile, a Government spokesperson has told RTÉ News that the cost to the State of Pope Francis' visit to Ireland will not be available until after the two-day visit.