The Taoiseach Micheál Martin has said "no one party should have a veto" over the future of Stormont.

The Taoiseach was responding to comments by DUP leader Jeffrey Donaldson, who said his party would have difficulty reforming a Stormont executive after the upcoming Assembly election if issues with the Northern Ireland Protocol were not resolved.

Mr Martin said: "No one party should have a veto over whether the Executive exists or continues on, and likewise with the Assembly.

"I believe that decision is very damaging to politics itself, and to people's trust in politics."

On Friday, Mr Donaldson warned that his party will not support the restoration of the power-sharing Executive at Stormont after elections in May, if the dispute over the Protocol is not resolved to its satisfaction.

He told RTÉ News: "There would be little point in me withdrawing a minister from the executive and then, even if the Protocol issues haven't been resolved, forming a government after the Assembly elections.

"We want to seek a fresh mandate, but we are clear, that mandate is based on getting a quick resolution on the Protocol, getting a solution that we can all live with, and then moving on with the process of government in Northern Ireland, delivering for everyone here.

"We are very clear. We want to see the EU and the UK government reach an agreement and my preference would be that that happens before the Assembly election so that we can all seek a fresh mandate and form a government.

"But if agreement is not reached between the government and the EU, if we haven't got a satisfactory outcome on the Protocol, then I am clear, the DUP will not be involved in forming a government in Northern Ireland until those issues have been satisfactorily addressed."

Mr Martin said the DUP should have awaited the outcome of UK-EU negotiations before making a decision.

"It's not the European Union's fault that this has gone on so long in respect of the talks around the resolution of issues pertaining to the Protocol and the trade agreement," Mr Martin said.

"Those discussions are now continuing between the European Union and the United Kingdom. The conclusion of those should have been awaited, in my view.

"A lot of progress has been made. And a lot of advances were made by the European Union side, and they're still prepared to engage with the United Kingdom and those talks are continuing," said Mr Martin.

Paul Givan announced his resignation as Stormont's First Minister yesterday evening after less than a year in the role. The move also triggered the automatic removal of Sinn Féin's Michelle O'Neill from the Deputy First Minister position.

Governing powers were formally removed from the Northern Ireland Executive at midnight.

Other Stormont ministers can remain in post, but the Executive can no longer meet and is unable to take significant policy decisions.

The pair will meet again in London next week to continue discussions.

Power sharing is the only game in town, says McDonald

The Sinn Féin leader Mary Lou McDonald said the DUP needs to accept that power sharing is "the only game in town" and that they do not have a veto over the future of Stormont. 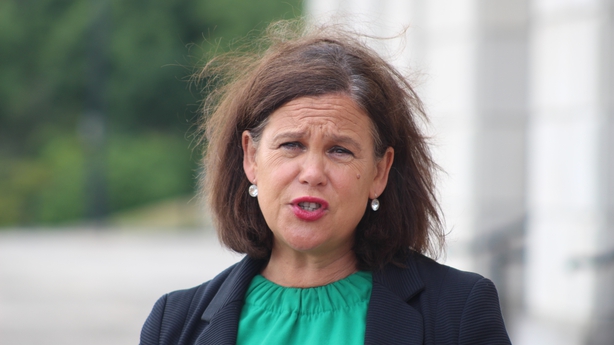 "Neither the DUP or anyone else gets it all their own way.

"Nobody has a veto on good politics and political progress. The DUP don't have a veto anymore and they need to come to terms with that reality," said Ms McDonald.

The Minister for Foreign Affairs said the DUP's decision for Paul Givan to withdraw as First Minister is unhelpful and "one party has decided to pull everything down" in protest over the Northern Ireland Protocol.

Simon Coveney said the DUP made a political decision to "pull the plug" on the NI Executive.

Speaking on RTÉ's Morning Ireland, Mr Coveney said negotiations between the UK and the European Union will continue but "unfortunately politics in Northern Ireland won't in the way it should".

He said it is enormously frustrating for the other parties in Northern Ireland who "agree on one thing" that politicians have an obligation to work together, but "the DUP has decided to isolate themselves from that thinking".

Mr Coveney said there is no perfect solution, but the Protocol was agreed between the UK and EU and with some debate on it also from the Northern Ireland parties.

"It is very unwelcome"@simoncoveney says "politics can't function as it should and needs to" in Northern Ireland because one party has "decided to pull everything down", adding that "it doesn't change much" in talks between Liz Truss and Maroš Šefčovič | https://t.co/dU493JYG47 pic.twitter.com/kt93recGZO

He said Mr Donaldson had not given ongoing talks between the UK and the EU a chance, ahead of expected progress in the coming weeks.

"People are working night and day to respond to legitimate unionist concerns and anxieties. We are listening to unionism," he said.

Mr Coveney said that, while the move was unwelcome, it "doesn't change much, actually, in the context of the negotiations".

He also said that officials in the Department of Agriculture are continuing with post-Brexit checks on goods arriving from Great Britain, despite an order from DUP Agriculture Minister Edwin Poots.

DUP decision based on lack of progress over Protocol - Donaldson

Speaking on the same programme, Mr Donaldson said the decision to withdraw the First Minister was taken because no progress has been made on the Protocol and his party simply acted on a warning he first gave last September.

Mr Donaldson said the Protocol is causing real economic harm and societal harm, and the party has waited months and months with no progress made in talks between the UK and EU.

"All of the Departmental ministers remain in place"@J_Donaldson_MP says despite the Executive losing governing powers there is no reason why the health service should not operate fully, or reason why Covid restrictions cannot eventually be lifted | More: https://t.co/dU493JYG47 pic.twitter.com/EwVnJrYJ1i

Mr Donaldson said: "When I met Liz Truss at the end of last year, she asked me a straight question. What is your limit here, when do you need to see progress by?"

He said he gave a firm date of 31 January and last week he asked the British Prime Minister his assessment of the likelihood of agreement being reached with the EU by the deadline.

Mr Donaldson said Boris Johnson told him there was a 20 to 30% chance of agreement. He also asked in circumstances where agreement was not reached would the UK be prepared to act unilaterally.

"I got no such commitment," he said.

Mr Donaldson said the EU and Irish Government have argued for a long time that the main purpose of the Protocol was to protect the Good Friday Agreement and the political institutions.

"Despite that the Irish Government and EU have completely ignored the fact that no unionist representative supports the Protocol. That cuts right through the heart of the principle of consensus which is right in the centre of the Good Friday Agreement."