The DUP's Paul Givan has announced his resignation as Stormont First Minister in protest over the Northern Ireland Protocol, with the move coming into effect at midnight.

An emotional Mr Givan said his short stint as First Minister had been a privilege and he thanked his family for their support.

"Today marks the end of what has been the privilege of my lifetime - to serve as the First Minister of Northern Ireland," the Lagan Valley MLA said.

"Holding this office is one that comes with a heavy responsibility and I have often felt the weight of this burden, to do what is right for all our people."

Other Stormont ministers can remain in post but the Executive can no longer meet and is unable to take significant policy decisions.

New legislation due to be introduced next week will mean the Assembly can continue to function until the next election.

The move is part of the DUP's escalating protest strategy against Brexit's Northern Ireland Protocol.

"I urge them to reinstate the First Minister immediately to ensure the necessary delivery of public services for the citizens of Northern Ireland," he said.

The privilege of my life time to serve the people of Northern Ireland. Thank you. pic.twitter.com/2NrXMrKDAq

DUP Leader Jeffrey Donaldson has been warning for months that he could ask Mr Givan to step down if a dispute over the Northern Ireland Protocol is not resolved to his satisfaction.

Civil servants have yet to implement the instruction and checks are continuing.

Mr Donaldson said his party has focused minds on tackling issues with the protocol.

He added that Prime Minister Boris Johnson had apologised to him for not recognising "the harm" caused by the protocol.

'I have given the government and the EU more than enough time to act. The time has now come for us to act and for the people to have their say,' DUP leader @J_Donaldson_MP says, with Paul Givan's resignation set to see an election in Northern Ireland | https://t.co/UXO7chFdWE pic.twitter.com/PH5jcgEjH6

Speaking after Mr Givan's resignation, he said the protocol "represents an existential threat to the future of Northern Ireland's place within the Union."

Mr Donaldson said that the time was now right "to apply the maximum leverage" on the European Union "to bring forward sensible proposals" to quickly resolve the row over the protocol.

"We have reminded the Government of their promise in the New Decade, New Approach agreement to protect Northern Ireland's place within the UK internal market," he said.

"I want to thank Paul for the way he has undertaken his duties as First Minister over the last eight months, particularly in the midst of the pandemic."

Mr Donaldson added that "now is the moment" to send the signal that the DUP wants Stormont "free from the long shadows of the protocol".

"The Irish Sea border must go," he said.

When asked if the move by Mr Givan means an early election, Mr Donaldson said "it is entirely for the Secretary of State to decide the timing of an election".

Taoiseach Micheál Martin said that he is "deeply concerned about the latest developments," adding that "this is a very damaging move".

"It is absolutely vital for peace and prosperity in Northern Ireland that the Executive is delivering for the people of Northern Ireland, particularly now as we emerge from the Covid pandemic," his spokesperson added.

"The protocol is part of an international treaty agreed and ratified by the UK and EU, to protect the Good Friday Agreement in all its dimensions.

"I would urge the DUP to return to full engagement with all the institutions of the Good Friday Agreement and avoid any action that could damage peace and stability in Northern Ireland."

In a statement, Mr Coveney said that he believes that people want to see a positive commitment from their political representatives to work with each other to resolve issues in Northern Ireland, "rather than the creation of any new cliff edges or instability."

"There are of course ongoing discussions on the implementation of the Protocol between the EU and UK, where the Commission have put forward proposals directly addressing the concerns raised by unionist representatives, including significantly reducing checks on goods moving between Great Britain and Northern Ireland," he said.

"No positive agenda is served by undermining the institutions of the Good Friday Agreement and the resignation of the First Minister of course has wider implications for the Northern Ireland Executive and its important work."

'All progress in NI jeopardised' - O'Neill

Ms O'Neill has said that the DUP has "jeopardised all of the progress" that has been made in Northern Ireland.

Speaking to RTÉ News Six One, the Sinn Féin MLA said that the party has "walked away and left everything high and dry at the expense of the public."

"They walked away from the institutions and jeopardised all the progress that's been made and put in real risk and real jeopardy, and what's really important to people right now, which is the cost of living crisis and how we can respond to that," Ms O'Neill said.

She insisted that the DUP "delivered the Brexit mess" and said that it had been "dishonest with the public" about the protocol.

Sinn Féin leader Mary Lou McDonald called for an early Stormont Assembly election, which is currently due to take place on 5 May.

She said it is a "disgrace" that the DUP is threatening to pull down power-sharing when crucial legislation needs to be passed.

Sinn Fein leader @MaryLouMcDonald calls for an early Stormont Assembly election, which is currently due to take place on May 5th @rtenews pic.twitter.com/9sbPhoM2N2

"The Executive and the Assembly have a lot of work to do," Ms McDonald said.

Alliance Party leader Naomi Long has said that there is "constant drama and crisis".

Also speaking on RTÉ News Six One, Ms Long said: "It has more in common, at the moment, with the soap opera than it has with proper governance that the people of Northern Ireland deserve.

Ms Long said that she is particularly concerned about the budget, which has not yet been agreed. 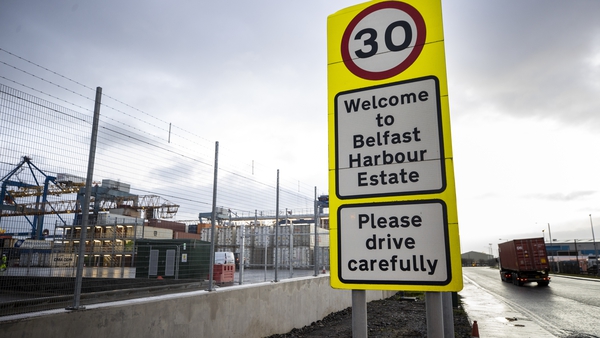