Eir has said that it will engage with any process to deliver high speed broadband across the country.

However, in a nine-page document sent to the Department of Communications it said the "constraints" of the current National Broadband Plan would have to be lifted.

In the document, seen by RTÉ News, Eir reiterates that it could provide broadband nationwide at a cost of less than €1 billion.

The cost to retail operators for a connection would be €170 compared to the €100 proposed in the NBP.

The company's Chief Executive Carolan Lennon said the correspondence is not a formal offer though.

She wrote that it was rather an "expert view" that "will help inform the NBP process and ultimately lead to a more cost-effective outcome for the taxpayer without compromising the service to the end user."

Ms Lennon said that Eir could have delivered the NBP programme as it currently stands but it was not willing to do so because of its complex and onerous provisions.

She said the decision to have a separate oversight division for the project, within the Department of Communications, was the single biggest reason why the company did not table a formal bid for the NBP.

A Department of Communications spokesperson has said that Eir's letter references a price range for the delivery of broadband of up to €1.5bn and it excludes any VAT or contingency allowance.

They said the assumptions that underpin Eir's numbers require consideration but an initial assessment suggests some may be unrealistic.

The spokesperson said there is no guarantee of future proofing, no commitment to 100% coverage, no VAT or contingency or protections for the State included in Eir's figures.

"Eir has explicitly stated that its letter is not a formal offer seeking to replace the current NBP process. Eir had previously withdrawn from that procurement process. Any new procurement process would delay the project by between three and five years," the spokesperson said.

Earlier the Minister for Communications said that Eir's proposal is still being evaluated by Government.

However, Richard Bruton added that the principles of the competition process have to be maintained to protect the taxpayer. 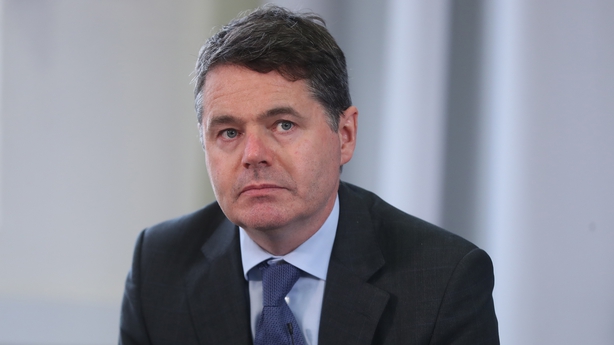 Minister for Finance Paschal Donohoe has said he and his department will be forming a view on Eir's proposal very soon.

The company withdrew from the NBP bidding process over a year ago, saying at the time that the risks had become "too great for its continued participation".

However, Ms Lennon then told the Oireachtas Communications Committee last week that her company could deliver the NBP for a fraction of the cost agreed with the preferred bidder, the Granahan McCourt consortium.

Last Friday the company submitted its plan to Government and it is understood that Eir will not be making any comment on its plan until the Government has had an opportunity to consider its provisions in full.

"The report only came in on Friday evening and myself and my department will be forming a view on it very very soon," Mr Donohoe told reporters today.

"I know that Minister [Richard] Bruton and his department have performed a very, very early assessment of the issue and they'll want to be presenting that, no doubt, to Cabinet in the coming period."

"A key thing for me to understand, and I hope the submission from Eir will allow me to do it, is if they believe they can deliver the objectives of ... the National Broadband Plan, why this approach wasn't made clear in the tendering process that they participated in for so long."