The Taoiseach has said that a positive outcome was still possible in attempts to reach agreement in the Brexit negotiations, but he said that "significant gaps remain".

Leo Varadkar said he was "disappointed and concerned" that significant gaps remain between both sides, despite recent intensive negotiations.

Speaking in the Dáil, he said: "I believe that a positive outcome is still possible.

"However, if we are to have an agreement secured and operational by the time the UK leaves, then we need to make decisive progress now."

He said the Government was still planning for a range of scenarios.

"No matter what happens things will be different, if not from March next year, then from January, 2021," he said.

The comments came ahead of a summit of European leaders in Brussels tomorrow.

The Taoiseach said Ireland was stepping up preparations for physical infrastructure at ports and airports after the UK's departure from the European Union.

Ministers held detailed discussions in Dublin today surrounding the hiring of customs officers and veterinary inspectors, as well as the upgrading of IT systems.

Mr Varadkar told the Dáil: "I cannot say at the moment that decisive progress has been made, but that is something that will play out over the next couple of days in Brussels, and a decision will be made whether or not to have a November summit when we can determine whether that is necessary - we won't be having a summit for the sake of it."

During Leaders' Questions Mr Varadkar said that a Brexit "no-deal scenario is unlikely" but the Government had stepped up its preparations for that scenario.

He said: "We are stepping up our preparations for that scenario and we had a detailed discussion at Cabinet today on Brexit and on those discussions and that does include the hiring of customs officials, veterinary inspectors.

"It includes preparing legislation, it includes IT systems and includes preparations to install physical infrastructure at our ports and airports, but not along the land border between Northern Ireland and the Republic."

The Taoiseach said that a special EU summit has been pencilled into his diary for next month, but it will only take place if "substantial" progress was made during this week's talks in Brussels.

He was responding to Sinn Féin leader Mary Lou McDonald, who pointed out that last December the British government signed up to a deal to avoid a hard border, safeguard the Good Friday Agreement, and ensure no loss of citizens' rights. 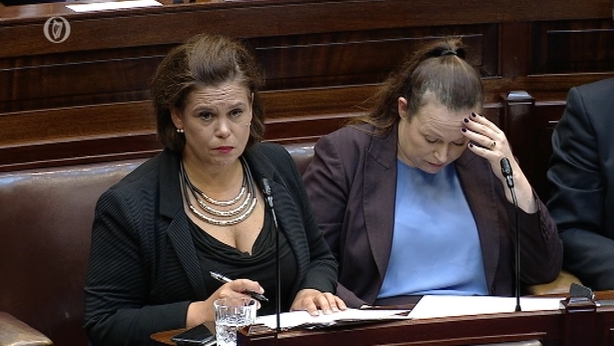 She said that at that time we were told there was a deal on the backstop. Ms McDonald said that she met British Prime Minister Theresa May yesterday and told her that she needs to live up to commitments, adding that "regrettably her toxic deal with the DUP has undermined progress".

Ms McDonald said the DUP cannot be allowed to dictate the pace of Brexit.

Fianna Fáil leader Micheál Martin warned the Taoiseach not to risk "being caught in a period of election campaigning or government formation" when quick responses will be needed to protect Ireland's interests in the Brexit negotiations.

He also warned that Ireland was "nowhere near ready" for Brexit.

"We must be ready for all eventualities but the growing evidence is that we are nowhere near ready," he said.

WATCH: @MichealMartinTD warns Taoiseach not to risk "being caught in a period of election campaigning or government formation" when quick responses will be needed to protect Ireland's interests in the Brexit negotiations. pic.twitter.com/zlzDcVz7fw

Independents4Change TD Maureen O'Sullivan asked the Taoiseach about the current difficulties with Brexit and the implications for the Good Friday Agreement.

She said there was now a "real fear" among Justice for the Forgotten - the group representing the survivors and families of the 1974 Dublin-Monaghan bombing - that they "may never see a resolution".

The Dublin Central TD said that after many years and three Dáil motions in 2008, 2011 and 2016 there has been no resolution.

In response, the Taoiseach said: "Unfortunately I am not in a position to answer those questions either. There is only so much information that any of us have about these terrible events which occurred some decades ago."