The Tánaiste has told the Seanad that she has received fresh legal advice from the Attorney General which reaffirms that she could not intervene in the legal strategy of the former garda commissioner at the O'Higgins Commission.

Frances Fitzgerald said the letter from Attorney General Seamus Woulfe indicated that the legal position of then-commissioner Nóirín O'Sullivan was for her and her own legal team to decide.

Ms Fitzgerald also reiterated her assertion that she had no hand, act or part in the legal strategy of Ms O'Sullivan's legal team.

It has emerged this evening that the email was discovered by the Department of Justice a fortnight ago, a week before the Tánaiste was told it had been found.

‘I see thousands of emails...I don’t remember reading that email. But it is likely that I read it’- Tánaiste on that email in Seanad tonight @rtenews pic.twitter.com/StDgUnVJZn

With regard to an email in relation to the legal strategy of the former garda commissioner, which was sent to the Tánaiste on 15 May 2015, Ms Fitzgerald said, "a number of points have been made about the fact that I said that I didn't remember getting that email. I got thousands of emails and I made every effort to read every email.

Sources close to Sergeant Maurice McCabe have said they want more answers and clarity about the email, which detailed a strategy to attack the credibility and motives of Sgt McCabe.

Speaking to RTÉ News, the sources say they have "serious concerns" about it.

Meanwhile, the Fianna Fáil parliamentary party has agreed to give party leader Micheál Martin the "space" to decide how best to approach the controversy.

It was confirmed to RTÉ News earlier that discussions have taken place between Fianna Fáil and the Government.

It is likely the talks address the fallout from the Tánaiste address to the Dáil last night.

However, Government sources sought to play down the contact, saying it happens almost every day as part of the Confidence and Supply agreement.

Sinn Fein says it is giving the Tánaiste one more day to answer questions satisfactorily before deciding whether or not to table a Dáil confidence motion.

The party said it will consider its position again tomorrow after the Tánaiste is expected to answer Leaders' Questions in the Dáil at midday.

Earlier, Fianna Fáil leader Micheál Martin said the email sent to the Tánaiste regarding the legal strategy was "damning" and should have raised alarm bells. 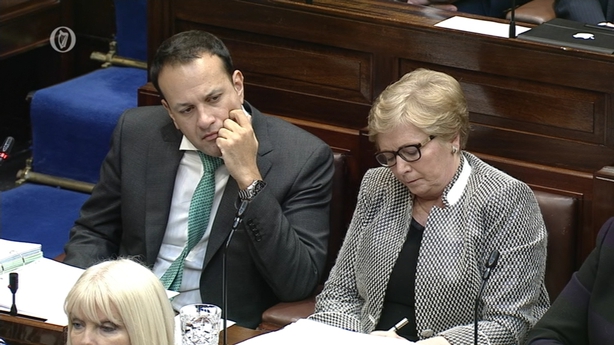 Speaking during Leaders' Questions in the Dáil, Mr Martin said the Tánaiste had also met the McCabes and would have known the trauma caused by the false allegations against him.

He said it was not credible that Ms Fitzgerald would have forgotten the email.

On Monday, it was confirmed that the Taoiseach's account of when Ms Fitzgerald first learned about the legal strategy had been corrected by the Department of Justice.

Mr Varadkar told the Dáil last week that the Tánaiste only became aware of what occurred during the opening days of the Commission of Investigation "around the time it entered the public domain".

This would have been in May 2016 when transcripts of proceedings at the commission were leaked.

However, it has since been confirmed that Ms Fitzgerald was informed about a row over the strategy that emerged at the O'Higgins Commission in May 2015.

This was a full year before the issue came into the public domain.

Mr Varadkar again insisted that the Tánaiste had no hand, act or part in the legal strategy.

He said the reason why Ms Fitzgerald did not act on the email was because advice was given that she could not act.

He also said he had spoken to Sgt McCabe, who disputed the contents of the email, and said that the allegations were not raised in the O'Higgins Commission.

"He actually disputes the contents of the email. He says that these criminal allegations around sex abuse were not raised that day.

He said that left everyone confused and now we do not know if the contents of the email are actually accurate.

Mr Varadkar also told the Dáil that has asked the Department of Justice to do a trawl of the documents again to see if there was anything that had not yet been passed to the tribunal.

He said he also asked for a report on the implementation of the Toland Report on the functioning of the department.

Sinn Féin deputy leader Mary Lou McDonald said the very fact that the Taoiseach has ordered a trawl of the documentation underscores the seriousness of this matter, and there are serious questions on the judgement, competence and credibility of the Tánaiste.

Mr Varadkar replied that he has confidence in the Tánaiste, but is not satisfied that on at least two occasions in the past week, he has been given incomplete information from the Department of Justice.

He said his role is to account for the Government to the Dáil and he did not like to be given additional information after the fact.

"I'm not satisfied with that and that's why I've asked a full trawl of documents in the Department of Justice and any documents that are found should be submitted to the Tribunal," he said.

Addressing the Taoiseach, Sinn Féin deputy leader Ms McDonald said she noted that "the record of the Dáil reflects the fact that you are either misleading the Dáil again or being disingenuous."

"You have said that you have defined prior knowledge, very specifically as after the fact of the cross-examination. You are now saying the Tánaiste knew nothing of this until the commission was under way."

"You need to clarify now Taoiseach."