The Taoiseach's account of when Tánaiste Frances Fitzgerald first learned about the legal strategy to attack the credibility and motives of Sergeant Maurice McCabe at the O'Higgins Commission has been corrected by the Department of Justice.

Leo Varadkar told the Dáil last week that the Tánaiste only became aware of what occurred during the opening days of the Commission of Investigation "around the time it entered the public domain".

This would have been in May 2016 when transcripts of proceedings at the commission were leaked.

However, it has now been confirmed that Ms Fitzgerald was informed about a row over the strategy that emerged at the O'Higgins Commission in May 2015.

This was a full year before the issue came into the public domain.

A spokesperson for the Department of Justice confirmed to RTÉ News that while the department had no prior knowledge of the legal strategy, it "was made aware in general terms in May 2015 of an issue having been raised by Counsel for Sergeant McCabe following the exchanges at the commission hearings and the then-minister was informed at that time in the context of it being a matter for the gardaí.

"As the Taoiseach has stated, the then minister did not become aware of the full details of the issue until the matter became public. The same is true in respect of the department's knowledge."

Last Wednesday, the Taoiseach told the Dáil in answer to a question by Labour leader Brendan Howlin that he was informed "by the Department of Justice and Equality that it was told about the approach taken by the commissioner’s senior counsel after the cross-examination had already taken place".

Mr Varadkar went on to say: "I spoke to the Tánaiste who told me that she had no hand, act or part in this decision and she was not aware of it until after the fact around the time it entered the public domain.

"The Department of Justice and Equality has told me that it was not made aware of it until after the fact."

The question of when the Department of Justice and the former justice minister became aware of the controversial legal strategy pursued by former garda commissioner Nóirín O'Sullivan's legal team arose in recent weeks after Labour TD Alan Kelly put down a series of detailed parliamentary questions relating to this issue.

Mr Kelly, who said he was acting on information he received from informed sources, complained that his questions had not been properly answered.

It emerged shortly after the O'Higgins Commission Report was published in May 2016 that the former garda commissioner's legal team had been instructed to attack Sgt McCabe's credibility and his motives for making allegations of garda malpractice. 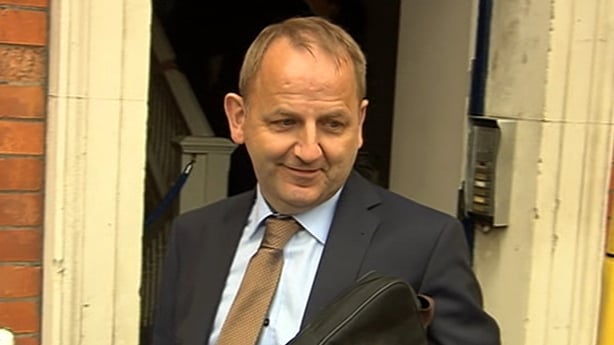 The commission was told that a senior garda would give evidence that Sgt McCabe had admitted at a meeting in Mullingar in 2008 that he only made his allegations because of a grievance he had with a senior officer.

However, Sgt McCabe was able to produce a tape recording of the meeting that proved this was not the case.

The matter was then dropped by the garda commissioner's legal team.

The revelations of what had occurred behind closed doors at the commission caused a major controversy when it emerged in May 2016.

Ms O'Sullivan came under pressure to explain why her legal team attacked the garda whistleblower in private when she had repeatedly supported him in public. She referred the matter to GSOC.

The handling of this issue is also being investigated by the Disclosures Tribunal.