The inquest into the deaths of four American visitors in Wexford has heard they died while trying to do a U-turn on the main Rosslare to Waterford road.

Douglas Alexander Snr, his wife Lily and their two sons, Douglas Alexander Jnr and Stephen, all died after their car was in collision with an articulated lorry on the N25 on 4 December 2017.

Stephen Alexander, a father of two, was a decorated Bolingbrook Police Department officer.

The four had travelled from the United States to attend the funeral of Lily's sister, Winifred, at Cushinstown, 5km from New Ross.

The inquest before Wexford County Coroner Dr Sean Nixon was held at the Brandon House Hotel in New Ross, the same hotel where the Alexanders had last eaten before they set off to attend the removal
ceremonies. 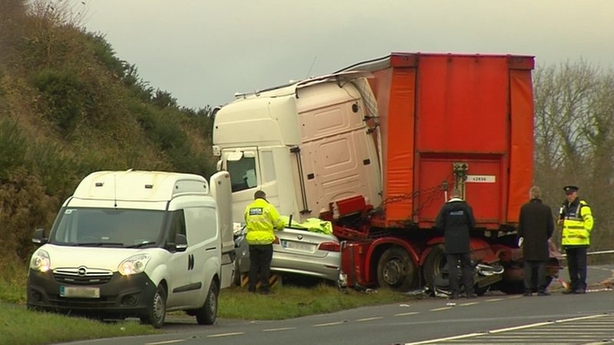 Garda Robert Carty said that the Alexanders had flown over from Chicago for the funeral and they had been travelling in convoy behind relatives of theirs, Oliver and Mary Prior, when the collision happened at Begerin Hill on the N25 outside of New Ross.

He said both cars were doing a U-turn on the road and that while the car being driven by Oliver Prior had completed the manoeuvre, the BMW being driven by Douglas Alexander Jnr was hit by an articulated
truck while attempting the same move.

All four died at the scene after their car became trapped underneath the lorry, which had jack-knifed as it attempted to avoid them.

Oliver Prior, who lives in Tallaght in Dublin, told the inquest that he would normally have picked up Mr and Mrs Alexander from the airport, but because their sons had decided to travel over also, they had decided to hire a car.

They all travelled to New Ross on the afternoon of 4 December, ate at the Brandon House Hotel where they were booked to stay for the night, and set off shortly after 6pm towards Cushinstown Church for
the removal.

Mr Prior said his wife Mary said she thought they had missed the turn for the church and he pulled into an entrance on the left side of the road, with the Alexanders' car also pulling in.

He said he pulled out to head back towards New Ross as it was safe and was still in first gear having crossed the road when he heard a bang.

The lorry driver, Paul Caulfield, who is based in Armagh, said he was heading towards Rosslare to the ferry and he knew the road very well as he travelled it at least twice a week.

He said he had not been on the phone at the time of the crash, that the radio was not even on and himself and his passenger, Kevin Collins, had been chatting on the journey.

He told the inquest it was not raining but the road was greasy. 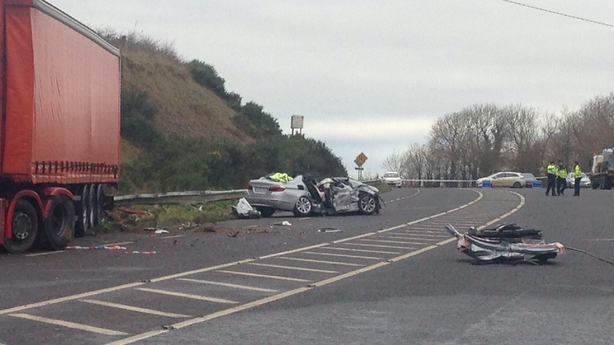 He said that as he came over the top of Begerin Hill, he saw a car shooting across from the left-hand side maybe 50m in front of him, and then a second car came out, he slammed on the brakes but the
collision happened.

Witness Liam Dwyer said the lorry looked like it had done something out of character as if to avoid something.

He said Mr Caulfield had no time to react.

Garda traffic collision experts told the court that when the lorry was examined, it was found to be in perfect condition and it had been doing 70km/h, 10km/h below the speed limit at that location.

The coroner said it was a very sad and tragic case, that the driver of the car would have been at a major disadvantage having only arrived from the States a few hours previously and would not have had
much rest.

The coroner said that being used to driving on the other side of the road, he may have been expecting traffic coming from the left rather than from the right, and that the driver of the lorry had done nothing wrong.

In a statement read out on behalf of Doug Jnr and Stephen Alexander's wives, solicitor Caroline McLaughlin said the devastated family were very grateful for the heroic efforts of the emergency services to save their loved ones.

"I express on their behalf their sincere gratitude to all who came to the assistance of their family in the immediate aftermath of the accident," she said, paying special tribute to gardaí, New Ross Fire Brigade, paramedics and motorists who stopped to help.

"To (nurse) Grace O'Sullivan, it is a source of great comfort to the family to know the care afforded by you and the bravery you showed under such difficult circumstances and they are eternally grateful to you.

"To Fr O'Neill, it is also a source of great comfort to the family to know that the sacraments were administered and that their family were blessed at the scene of the accident.

"They have also asked that I express to the driver of the lorry, Mr Caulfield, and his passenger, Mr Collins, that there is not a day that goes by they do not think of you and how difficult the incident must have been for you to encounter.

"They wish you health and happiness and pray that this accident will not cause you any difficulties into the future."

The jury returned a verdict of accidental death due to catastrophic injuries sustained in a road traffic collision.