Gardaí investigating the murder of a 52-year-old woman in Dublin have said that she could have been dead for some time before her body was discovered.

Lisa Thompson was found dead at her home at Sandyhill Gardens in Ballymun yesterday. She had been stabbed several times.

She was last seen on Saturday and gardaí have appealed for anyone with information on her movements to contact them.

Detectives have said that they have not yet identified a suspect for the murder and are keeping an open mind in the case.

Gardaí investigating the murder of a 52-year-old woman in Dublin have said that she could have been dead for some time before her body was discovered in Ballymun yesterday. Gardaí have appealed for anyone with information to contact them | Read more:https://t.co/UXCrdIb7vd pic.twitter.com/MZy0zlESXJ

The house where Ms Thompson was found dead remains sealed off for a second day as forensic specialists continue their examination.

The mother of two young teenagers, a boy and a girl, had been attacked and stabbed possibly up to 12 times at her home. A neighbour alerted the fire brigade, who called the gardaí.

Gardaí said that they are not aware of any threats that had been made against Ms Thompson and that she may have been in the house for two days before her body was found.

They are examining Ms Thompson's phone and contacting everyone who knew her. 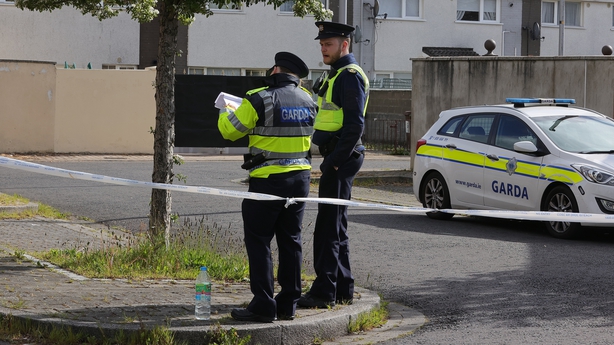 A post-mortem examination has been carried out by State Pathologist Dr Linda Mulligan and a preliminary report has been given to gardaí.

A garda family liaison officer has been appointed to support her family and keep them informed of developments.

Gardaí have said that Ms Thompson's children have lived with their father for some time and were not in the house with her when she was murdered.

They have also moved to reassure the community that they are following all lines of inquiry to ensure they bring the killer to justice.

A local councillor has said that there is "profound shock" in Ballymun following the violent death of Ms Thompson.

Speaking to RTÉ's Drivetime, Keith Connolly said that she was "well-known and well-liked".

He also said it was "very harrowing" for her children to lose their mother and "the nature of her death makes it worse".