Minister for Education Norma Foley has said that the Government is determined to progress talks with public sector unions on pay.

She was speaking to reporters at the annual congress of the Teachers' Union of Ireland in Wexford.

As Ms Foley entered the room to address the conference, a group of delegates held up placards outlining their concerns over Leaving Certificate reforms.

Ahead of the address, the TUI passed a motion seeking pay increases to counteract inflation, with one delegate calling for a ballot for industrial action to accompany the pay claim. 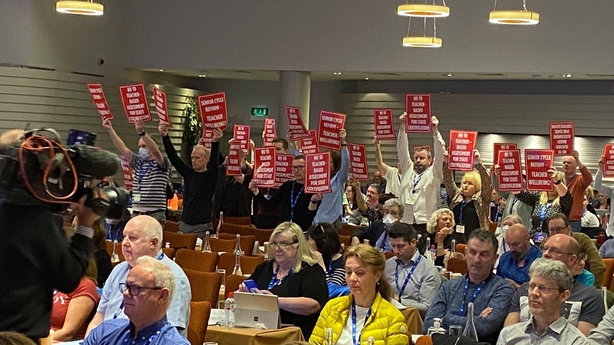 Ms Foley told reporters that the Government is aware that times have changed since the last public sector pay deal, 'Building Momentum’, was agreed.

"I think it is important that those initial discussions with public sector unions have already begun with Minister (for Public Expenditure) Michael McGrath and that there is an absolute determination on his part to progress that as quickly as possible and recognise that we are in a different place now as we were when 'Building Momentum' was first negotiated," she said.

Delegate Eddie Conlon tells the @TUIunion conference that there should be a ballot for industrial action as part of the union's pay claim. @rtenews pic.twitter.com/YnsPj7PHwx

Yesterday, Ms Foley addressed the conferences of the INTO in Killarney and the ASTI in Cork.

For the most part, her speech to the ASTI was received in silence, but she was heckled when she referred to Leaving Certificate reform and pay.

Earlier, ASTI members agreed to defer a proposal to ballot for industrial action on a range of pay issues and instead agreed to first allow the Irish Congress of Trade Unions and the Department of Public Expenditure and Reform to work on a solution to the issue.

Yesterday, Minister for Further and Higher Education Simon Harris said that a new public sector pay agreement is needed before the end of the year.

During an address to the TUI Congress, he said that the Government needed to respond to the current pressures of inflation by sitting down with public sector unions and commencing a discussion on a public sector pay agreement.

"We need a new agreement that will underpin pay for public servants and we need it by the end of the year," Mr Harris said.

Members of the TUI will also debate motions relating to pay equity for new entrants, housing, pensions and investment in education.