The criminal gang behind a series of ATM robberies in the northeast caused devastation and destruction but ultimately their brazen activity was disrupted by gardaí.

Today, a former All Ireland club football winner was jailed for ten years for his part in the raids, during which hundreds of thousands of euro were stolen.

"When I checked my phone and the cameras at the hotel, I couldn't believe what I was looking at," recalled Jimmy Murray, owner of the Riverfront Hotel in Virginia, Co Cavan.

"There was a digger and tractor in the middle of the street ready to pounce on the ATM."

On 14 August, 2019 a massive Garda operation was put in place to stop the criminal gang based along the border.

As the gang was about to rip the ATM from a wall in Virginia, gardaí emerged.

At 2am that morning, the town's Main Street was swarmed with officers from several Garda national units, including the Emergency Response Unit, along with local detective units.

"A significant operation was put in place during the early hours of that morning with a lot of garda resources on the ground," explained Alan McGovern, Chief Superintendent of the Cavan-Monaghan Garda Division.

"It was an intelligence-led operation. During the course of the operation, two men were arrested. Another two escaped but were arrested later," he added.

Gardaí had been working for many months on a plan to dismantle this organised crime gang whose actions they said were devastating communities and businesses across the north east.

Just a few hours later, gardaí began a search of house near Moynalty, Co Meath where they recovered hidden bags of cash. Some of the money was stashed in an area above a roller garage door.

Between December 2018 and April 2019, this gang carried out five ATM raids.

Ballybay in Co Monaghan was targeted on 16 December, just days before Christmas. Almost €112,000 was in the machine that night.

Kingscourt in Co Cavan was next in March 2019, followed by Castleblayney in Co Monaghan and Kells in Co Meath in April. A total of almost €800,000 was stolen in the ATM thefts.

Some trends were emerging in all of the robberies. The criminals carried out their work in the dead of night when the streets of these rural towns were quiet.

They operated at the weekends when the machines were full of money. The gang robbed machinery and cars locally and used the diggers and trailers to carry out their well-planned operation. The cars were used to make their getaway.

"Their modus operandi was that they would take getaway vehicles, low loader trailers and diggers. And they used the diggers to rip the ATM machines from the wall, causing significant structural damage," explained Chief Superintendent Alan McGovern.

On 19 April 2019, they carried one of their most brazen thefts. At 4.23am the gang arrived into Kells and in four minutes they ripped two ATMs from Bank of Ireland and AIB.

It was Good Friday and the machines was well stocked ahead of the bank holiday weekend. There was around €230,000 in the Bank of Ireland machine and €250,000 in the AIB machine.

The gang deployed homemade spikes outside Kells Garda Station in a bid to slow down the garda response to the crime.

Given that these cash machine thefts involved demolishing the front of shops or banks to break free the money, it made sense for the gang, who wanted to avoid being captured, to steer clear of busy towns.

Rural communities rely heavily on an ATM to bring business and footfall into a town and in these cases, the towns impacted were left without ATM facilities for weeks.

In Kingscourt, Co Cavan, the ATM was replaced after it was raided in March 2019 but less than two years later the Bank of Ireland branch closed and the ATM was removed.

Locals ponder whether the ATM robbery was the death knell for banking services in the town.

"It was closed for a number of weeks. It had a huge impact on people and business in the area. The people went to other towns," said Kevin Victory, owner of the local Centra.

"I think it took them around ten weeks to replace it then. People came back to us when it was replaced but now the people are gone again because there’s no facilities," he added.

Ultimately it is rural communities that pay the price for ATM robberies.

Mr Justice Tony Hunt said last Friday that in many cases, the cost of the structural damage exceeded the amount of the money stolen in the ATM.

In the case of Castleblayney for example, €70,000 was in the ATM machine when it was stolen but the raiders caused €79,000 worth of damage and it cost over €10,000 to replace the machine.

Some businesses were hit with high insurance premiums because of the robberies, others have struggled to get a quote.

"This type of crime has a devastating effect on communities, not just on the person using the ATM but on the business community, who find it very difficult to recover from it," said Chief Superintendent Alan McGovern.

At the Riverfront Hotel in Virginia, owner Jimmy Murray is thankful the criminals' plan was foiled.

"It’s a very important part of the community. It’s the last ATM on the N3 between here and Dublin so from 5am in the morning until midnight it's a very busy machine. We’re very happy these men were caught," he said.

Chief Superintendent Alan McGovern thanked the public for their patience and support during the investigation and urged anyone considering engaging in this type of activity to think twice. 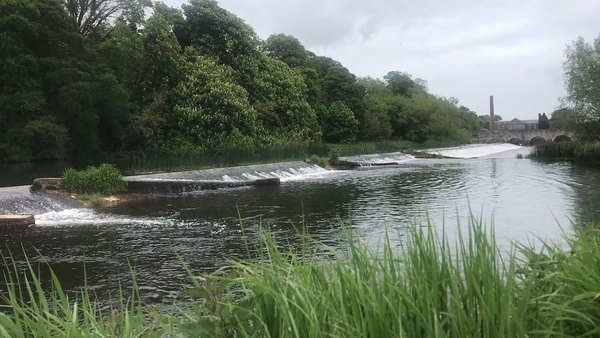