The service, which is being organised by the leaders of the main Christian churches, is being held in Armagh at the end of October.

A spokesman for President Higgins said he is not in a position to attend the ceremony.

He said this has been communicated to the organisers and that the President has conveyed his good wishes to Queen Elizabeth.

The statement concluded: "The President has welcomed, and continues to welcome any opportunities to meet with her majesty and members of her family."

It is understood that the President’s attendance had been expected at the event.

Áras an Uachtaráin has not explained why President Higgins will not be at the service.

President Higgins was today addressing the Arraiolos Group of EU Presidents in Italy, where they discussed the future of European cooperation.

He is due to meet Pope Francis in the Vatican on Friday. 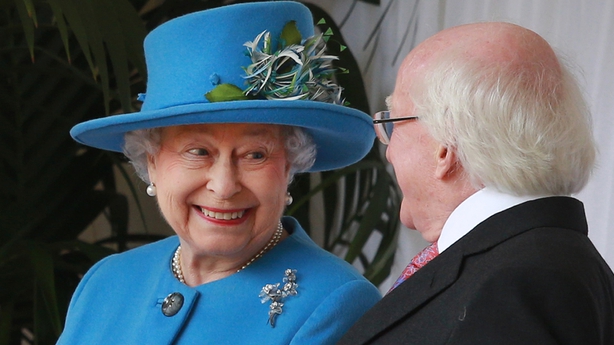 In a statement, the churches leaders said the service of "Reflection and Hope" will mark the centenaries of the partition of Ireland and the formation of Northern Ireland.

They said it was being held to contribute towards the work of building community and deepening relationships.

A spokesperson for Archbishop Martin said they had no further comment on the President's attendance at the event.

A senior figure in the DUP has questioned whether the President is snubbing the event.

Former education minister Peter Weir said he has written to President Higgins "asking if his office is officially snubbing all events marking this milestone in the decade of centenaries".

In a statement the MLA said: "If President Higgins is officially snubbing NI centenary events, I have urged him to think again.

"This island has been living through a decade of centenary milestones. At every stage, unionism has engaged positively and sought to use such events to advance reconciliation and peace.

"It is narrow-minded and deeply disappointing that Sinn Féin and the SDLP have vetoed almost every publicly funded initiative to mark Northern Ireland's centenary. They even vetoed the placement of a centenary stone in Parliament Buildings even though it was being gifted by unionist MLAs.

"For such high office in the Republic of Ireland to join Sinn Féin and the SDLP in boycotting centenary events speaks volumes about that country’s commitment to reconciliation and progress."

"The news that President Michael D Higgins has declined an invitation to attend a service at Armagh Cathedral alongside Her Majesty The Queen to mark the Centenary of Northern Ireland, is surprising and uncharacteristic from someone who has shown a consistent willingness to reach out and promote reconciliation," he said.

"The reciprocal State Visits were a high watermark in Anglo Irish relations and until we know the reason why he is 'not in a position to attend' we cannot be critical.

"Whether the President of Ireland attends or not should not detract from the fact Her Majesty the Queen will be in Northern Ireland marking our centenary at a church service which will see both Catholic and Church of Ireland Primates participate in an event entirely consistent with the Ulster Unionist vision of a Union of People."