The families of those killed on Bloody Sunday have given a mixed reaction to the news that one former British soldier is to be charged over the killing of 14 civilians.

Northern Ireland’s Public Prosecution Service announced this morning that one soldier would be charged with the murder of James Wray and William McKinney on the civil rights march in Derry in January 1972.

Soldier F will also be charged with the attempted murder of Joseph Friel, Michael Quinn, Joe Mahon and Patrick O'Donnell.

Mickey McKinney, whose brother Willie was shot dead, said: "Everyone deserves justice, including those whose loved ones were murdered by the British state."

He said it was "disappointing" for families who had not received news of prosecutions, saying: "We are mindful of those families who received that news today, and believe me, there are many."

But he added: "For us here today it is important to point out that justice for one family is justice for all of us.

Families of the victims of Bloody Sunday say they're disappointed only one former soldier is to face prosecution | https://t.co/1HEiUD7C08 pic.twitter.com/Ofsu6ja608

"It simply means that if these crimes had been investigated properly when they happened, and evidence gathered at the time then the outcome would've been different." 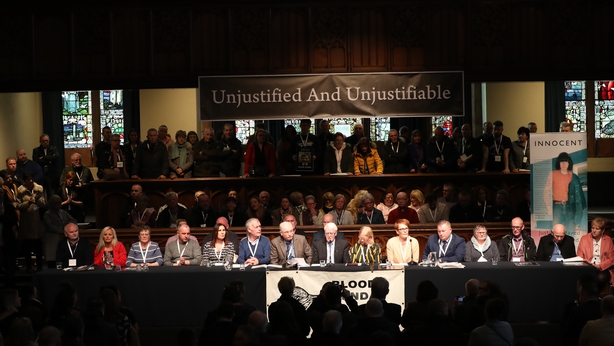 John Kelly, whose 17-year-old brother Michael was killed, said many had received a "terrible disappointment".

However, he welcomed the positive news for the six families affected by the decision to prosecute Soldier F.

"Their victory is our victory," he said at the Guildhall in Derry.

"We have walked a long journey since our fathers and brothers were brutally slaughtered on the streets of Derry on Bloody Sunday, over that passage of time all the parents of the deceased have died - we are here to take their place."

Mr Kelly highlighted there were legal means of challenging the decisions not to prosecute.

"The Bloody Sunday families are not finished yet," he said.

Geraldine Doherty, whose uncle Gerald Donaghey died, said: "And while we as a group of families and individuals may have differing views on whether or not the soldiers who carried out the shootings should face jail, or how long they should spend in jail, we are all agreed that they should face the due process of the law.

"And they should do so in public.

"The very few British soldiers that were charged during the conflict here were named, and the same should apply to those being charged now. Killers should not benefit from anonymity."

Ciarán Sheils of Madden and Finucane solicitors, who represent relatives of the Bloody Sunday victims, said it was a "remarkable achievement by the families".

He added: "Notwithstanding the unprecedented attempted political interference with the independence of the judicial process, the families have not only succeeded in consigning the Widgery report to history, and securing the complete vindication and declaration of innocence of all of the victims of Bloody Sunday through the Saville Inquiry, they have now secured the prosecution of Soldier F for the murder and attempted murder of six innocent people.

"We are disappointed that not all of those responsible are to face trial.

"We will give detailed consideration to the reasons provided for decisions not to prosecute the other soldiers, with a view to making further submissions to the Prosecution Service and we shall ultimately challenge in the High Court, by way of judicial review, any prosecutorial decision that does not withstand scrutiny."

Mr Sheils also said that when Soldier F faces charges they would expect that the anonymity will be stripped from him.

He said the royal prerogative of mercy should not be given to Soldier F if he is convicted.

The press conference at the Guildhall ended with a minute's silence in memory of those who died.

This morning, the families gathered outside The Museum of Free Derry, just yards from where the killings took place, and marched together to the city centre. 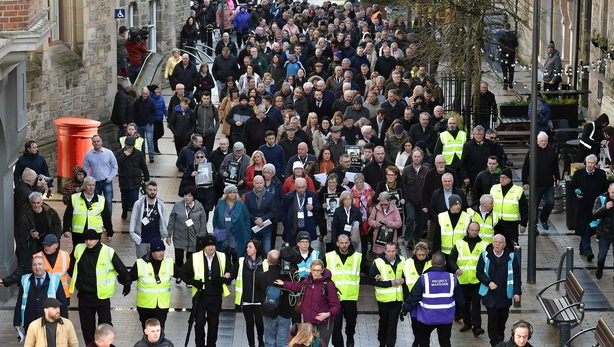 Responding to the news that one former British soldier will be charged, the Taoiseach said that the most important people are the families of the victims.

Leo Varadkar said: "The most important people in this matter are the families of the victims.

"I know that the Department of Foreign Affairs is in contact with them on behalf of the Government. All of our thoughts are with the families on what must be a very emotional day."